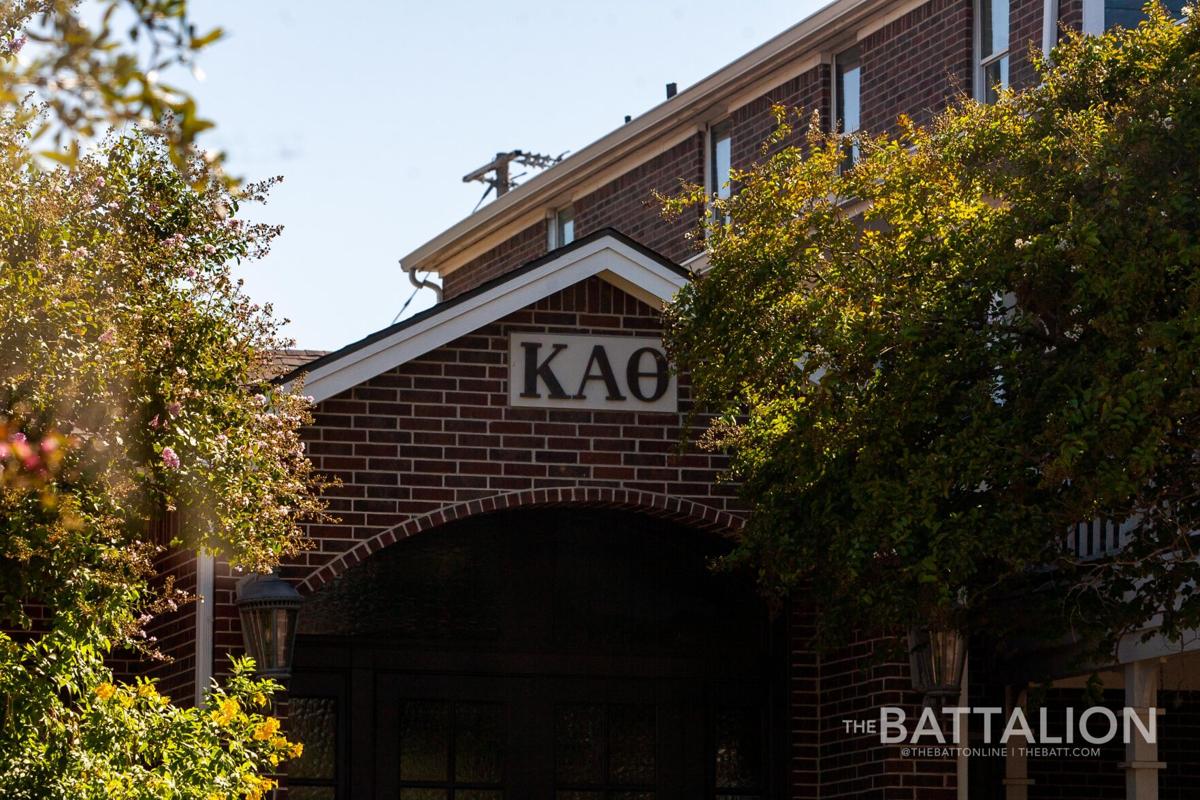 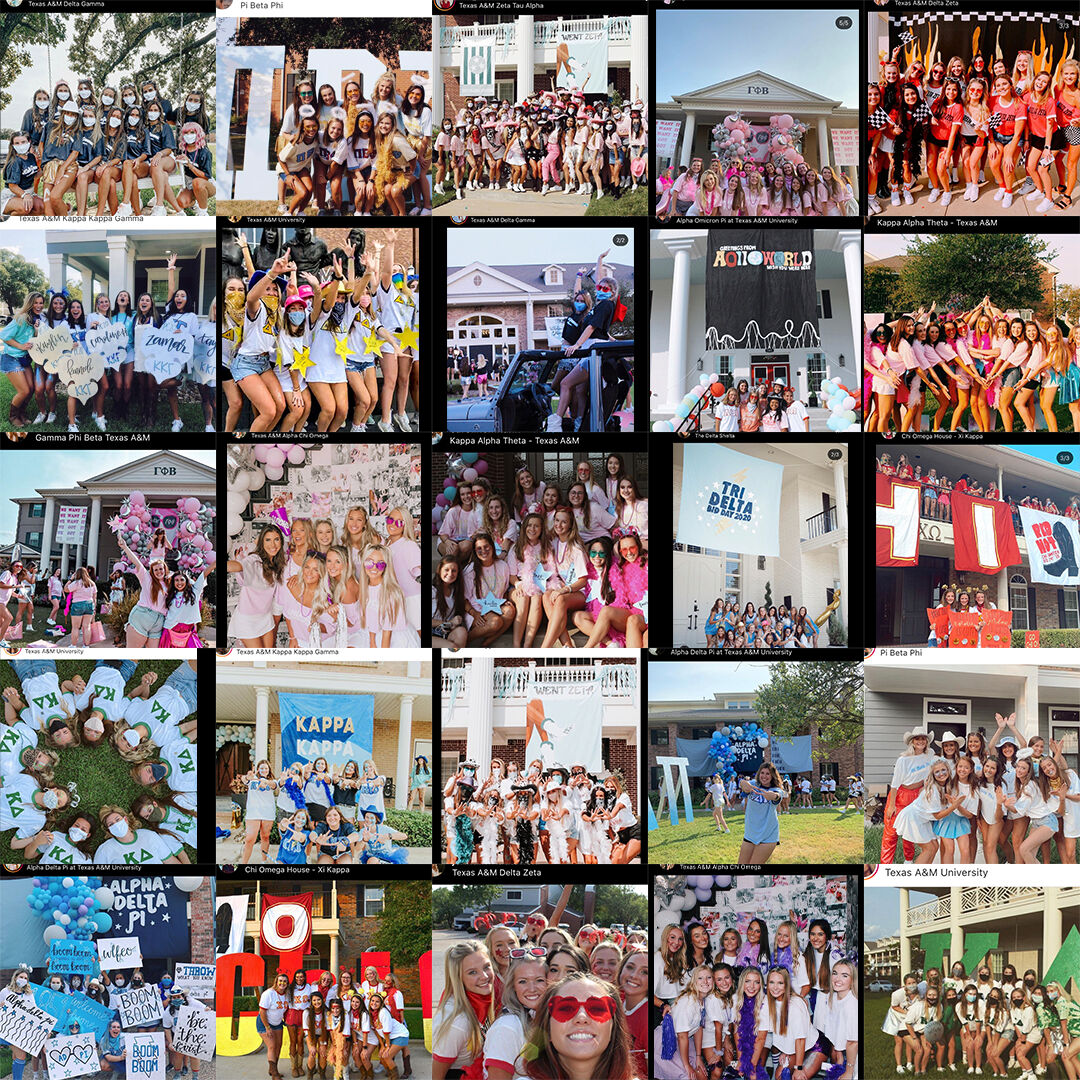 All Instagram photos in this collage were posted any time from Aug. 16 to Aug. 19. These posts depict instances where multiple members of various Texas A&M sororities violated COVID-19 guidelines.

Following a week of Texas A&M Panhellenic recruitment events, The Battalion has confirmed at least 10 A&M students in sororities have tested positive for the coronavirus: five in Kappa Alpha Theta, two in Delta Gamma, two in Kappa Kappa Gamma and one in Delta Delta Delta.

These positive cases were reported to members of the Gamma Phi Beta sorority via GroupMe, according to screenshots obtained by The Battalion.

“Howdy, howdy !! Given that other sororities have begun to have members test positive for COVID-19 (Theta: 5, DG: 2, Tri Delt: 1, Kappa: 2), it is all the more important that we be following…,” the screenshot reads before it is cut off.

“In response to the messages made about individual sorority members having COVID-19, CPC and the 14 Chapters of this community did adhere to university policy and submitted reported cases to the University immediately by these sorority women,” Campbell said. “These cases were discovered before Bid Day and safety precautions such as quarantining exposed members and tests given to other members of the Chapter were taken. We will continue to advocate and be responsible by ensuring active members can self isolate properly and the university is well informed of the cases in our community.”

When asked how many sorority members were self-quarantining after exposure to a positive case, Campbell declined to comment, citing FERPA regulations.

Editor's Note: According to the U.S. Dept. of Education's Student Privacy Policy Office, non-personally identifiable information is not subject to FERPA protections.

According to a July 8 press release issued by the Texas A&M CPC, sorority recruitment events were scheduled from Aug. 7 through Aug. 16. The release states that all events aside from Bid Day were to be held virtually through online presentations and Zoom calls.

Bid Day, held for potential new members (PNMs) on Aug. 16, was hosted by individual sorority chapters and was supposed to follow state, local and university health guidelines according to the release.

According to the A&M Office of the Provost, face coverings must be worn by all individuals on campus or at off-campus activities that are sponsored by A&M or A&M recognized student organizations.

Only Xi Kappa (the A&M chapter of Chi Omega) and Zeta Tau Alpha applied for approval from the mayor for outdoor gatherings of 10 or more people and both received approval, said Barbara Moore, assistant to the College Station City Manager.

“We ask that all groups applying for approval have outdoor events to adhere to COVID-related safety guidelines and best practices to ensure they are doing all they can to keep their guests safe,” Moore said.

Sorority chapters also created their own guidelines to ensure the health and safety of all current and potential members. Campbell said they fell short of meeting the expectations set by their guidelines.

“Bid Day was intended to be a pre-planned event with firm guidelines that Chapters had to get approved by CPC and reviewed by their staff/faculty advisor,” Campbell said. “The leadership of every Chapter sincerely intended to follow the plans submitted to CPC and the Office of Fraternity and Sorority Life at Texas A&M University, and although the intentions were good, a shortcoming occurred.”

Campbell cited excitement among members as a reason approved plans were not followed.

“On Bid Day, individual members became excited in welcoming home new members that some of the approved plans were not followed,” Campbell said. “CPC does recognize the shortcoming, and moving forward, we plan to do better with events our community hosts this semester, and beyond.”

When asked if any sorority chapters have had members test positive for COVID-19 since Bid Day, Campbell declined to comment.

“There is an expectation for all student leaders to work with their respective members to ensure compliance with current university, local, state and federal guidance,” Gravelle said. “If your organization has hosted or intends to host in-person events that fall outside of these guidelines, please adjust your plans accordingly to ensure compliance and to protect the health and safety of all involved.”

Texas A&M leadership has not yet announced any plans to release information regarding increases in COVID-19 cases in the university community. The Battalion has filed an open records request for documentation of all reports submitted to A&M about positive cases among faculty, staff and students.

Hannah Underwood and Meredith Seaver contributed to this article.

Following reports from The Battalion about at least 10 positive cases of COVID-19 among several Texas A&M sororities, the university has a…

Brady Stone is a journalism senior and former editor-in-chief for The Battalion. Brady was an assistant news editor and head page designer before becoming editor.