The bombs fell everyday on Mark Narikan’s village in the Nuba mountains of Sudan.

“It was a matter of killing people every night,” said Narikan, an ethnic Dinka who lived with his grandmother in a village called Chukudum. “Where I lived, it was just me and there was always fighting everyday, every night. So one day I decided, ‘I think I’m going to join these people.’”

The violence Narikan experienced is one story among many in a Sudanese conflict, whose bloodletting caused the United States and Texas governments to label it as genocide. The parties involved include ethnic sects and global energy companies — some of whom are invested in by Texas A&M University.

A three-month investigation by The Battalion into the finances of Texas A&M University and the University of Texas revealed investments by both university systems into companies directly tied to the Sudanese genocide. Texas law bans other state-run investments from putting money into companies related to the conflict, but the law does not prohibit the universities’ investment company from its actions.

The conflict in Sudan

The “people” Narikan refers to joining are the Lost Boys of Sudan, a group of approximately 20,000 boys who, according to the United Nations Children’s Fund, traveled thousands of miles on foot to escape the genocide perpetrated by the Sudanese government. Narikan became a Lost Boy when he left his village in 1995 after his brother Peter was kidnapped to be a child soldier in the rebel army.

“[We] would only walk at night, and then whenever it’s risky, we’d stay in the river,” Narikan said. “Nobody knows exactly where we are going, but if you keep going to the east you eventually end up in Kenya. A lot of people died on the way because of no water or food.”

Although Narikan was eventually relocated to the Dallas area as a refugee about 10 years ago, the genocide in his homeland continues and is predicted to displace 460,000 people just like him by the end of 2015, according to the United Nations High Commissioner for Refugees.

The Texas government has taken steps to stop public money from being invested in companies tied to the Sudanese genocide in the past. These steps however stop short of prohibiting Texas A&M and the University of Texas from investing university system money into the same companies blocked to other state funds.

In 2007, the state of Texas passed the Prohibition of Investment in Sudan Act. The law blocked two pension funds — the Teacher Retirement System and the Employees Retirement System — from investing in companies considered by the Texas Comptroller to have taken “actions that have directly supported or promoted the genocidal campaign in Darfur.”

The University of Texas Investment Management Company, UTIMCO, manages the Permanent University Fund — a public endowment currently worth $17.2 billion established in the Texas Constitution that supports 17 institutions throughout the UT and A&M systems. UTIMCO is invested in 10 of the 25 companies on the Comptroller’s list of those directly involved in the Sudan genocide.  These investments are worth about $1.5 million. Texas A&M University and the Texas A&M System declined to comment for this report. 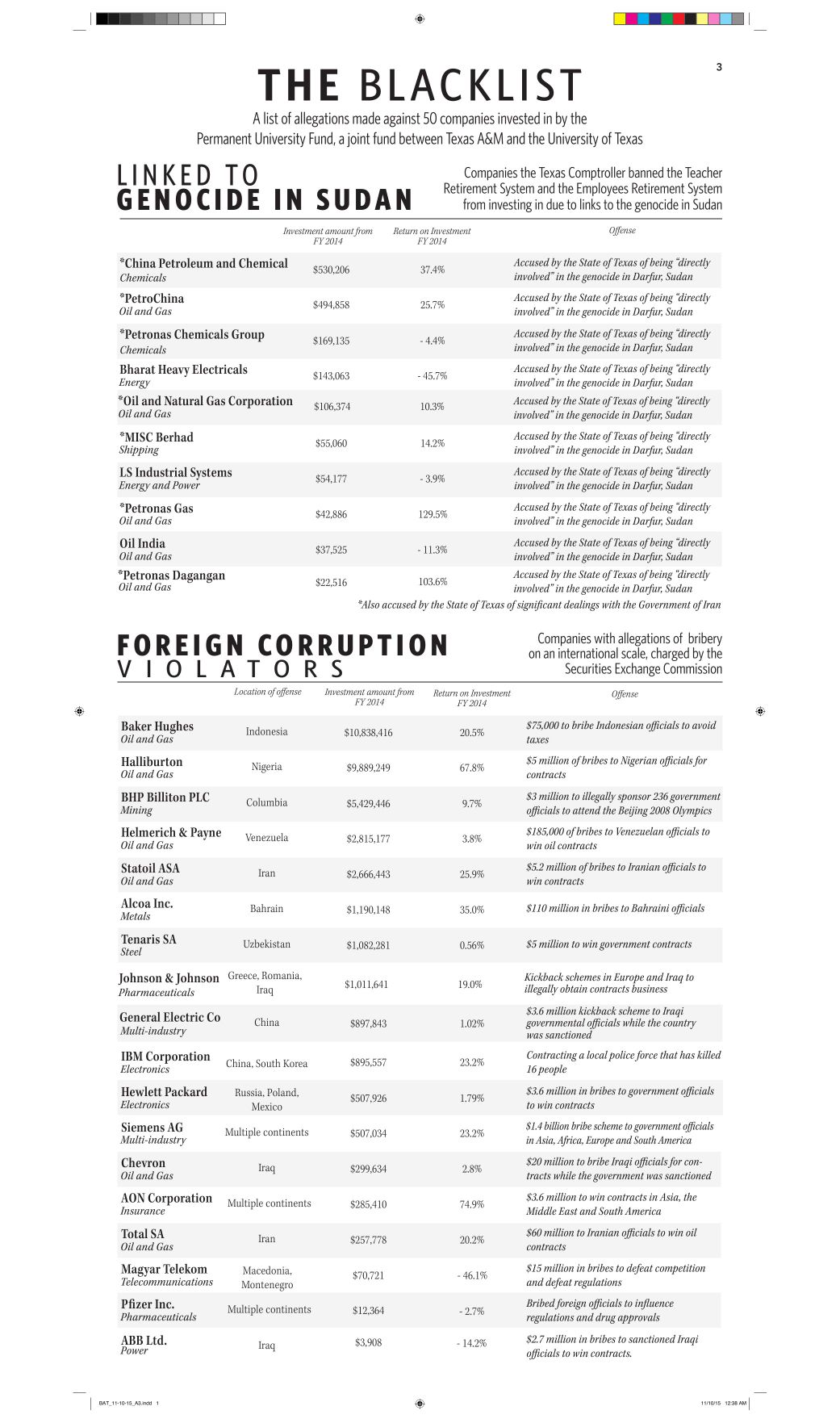 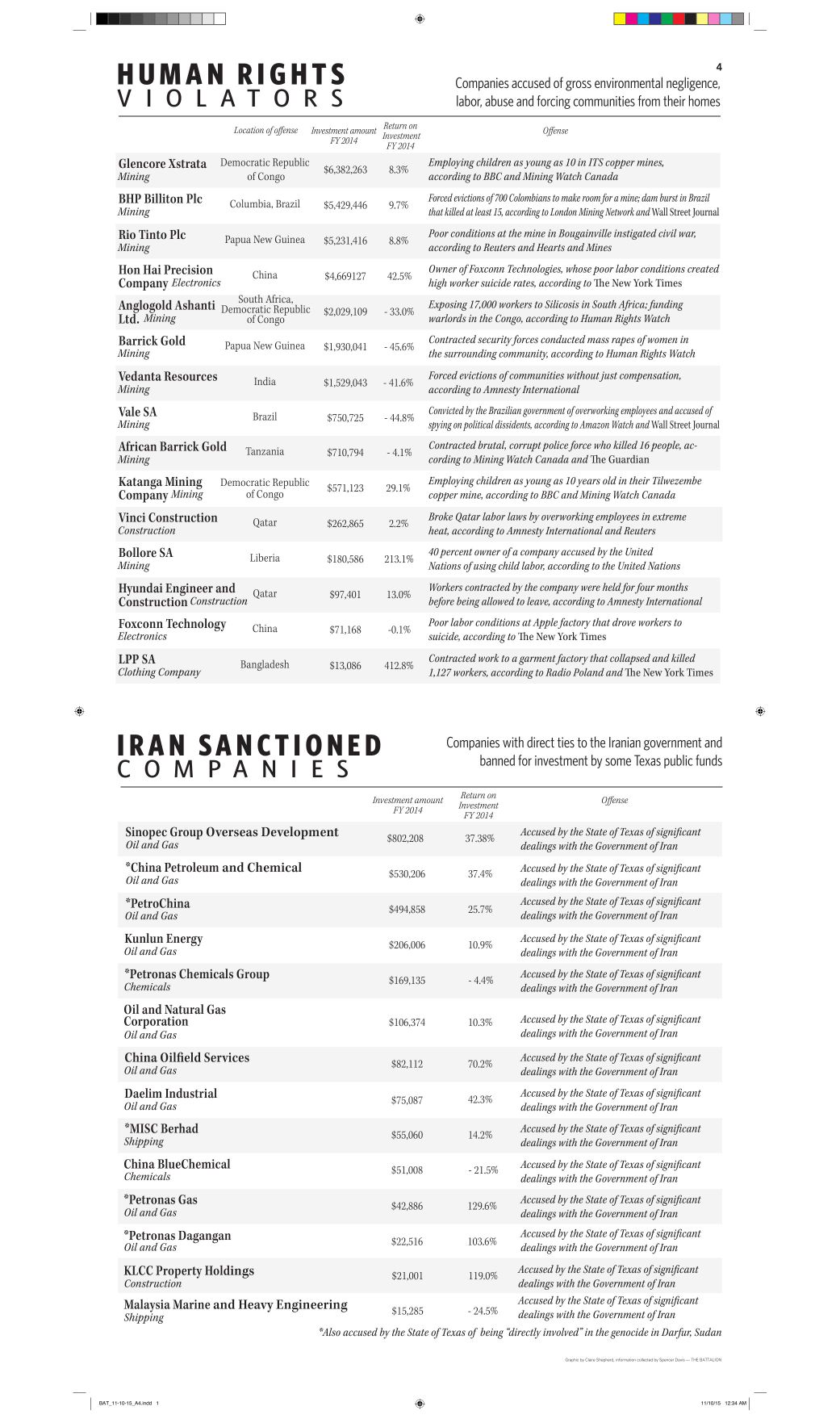 Nothing banned UTIMCO from investing in the same businesses that are tied to the genocide in Sudan.

“Oftentimes, we have to settle for a bill that’s less robust than what we would pass in a perfect world, but that’s just part of the compromising that’s required in the legislature,” said the author of the law, state Sen. Rodney Ellis. “When we passed the bill in 2007, the situation in Sudan had become an international tragedy of the greatest magnitude. You always want a bill to be as strong as possible, but you can’t let perfect be the enemy of good.”

Sen. Ellis wrote a law in 2009that would have applied  the same restrictions of investment in Sudan to UTIMCO, but after passing a vote in the Texas House of Representatives, the bill died in the Senate Committee on Finance.

While the current law does not directly apply to investments by UTIMCO, student groups at UT argued in 2014 the endowment should follow the example set by the law and divest from the companies on the Comptroller list.

“While investment in morally gray areas, such as tobacco and fossil fuels, is up for debate, an investment in genocide is not,” said Ali Breland, president of Texans Against Genocide, in a 2014 opinion piece for UT’s student newspaper The Daily Texan.

At least 61 universities have divested their endowments from companies they found to help fund the genocide in Sudan after 2005, citing the ethical concerns of investing in companies involved in genocide, according to Investors Against Genocide. A total of 30 states have passed similar laws or made the decision to divest from such companies since 2010, according to Investors Against Genocide.

The Texas law allows for the Comptroller to formulate the list of prohibited companies based off of findings from research firms. EIRIS Conflict Risk Network, one of the two research companies contracted by the Comptroller, said the companies are chosen by two standards — their risk of producing conflict and their connections to ethnic violence.

“Most of the companies profiled are in the oil, mineral extraction, power production and defense sectors,” said Kathryn Allan, head of projects at EIRIS. “Conflict risk exposure is identified by evaluating current factors contributing to or presenting a potential for conflict, such as a contested border near an oil concession or land and resource disputes involving ethnic tensions, which may give rise to violent conflict.”

U.S. Department of State officials say the ongoing conflict in Sudan is partially driven by a battle for oil production among opposing political and ethnic parties in Sudan. In a 2006 New York Times article, Abda Yahia el-Mahdi, a former Sudanese finance minister, said more than 70 percent of the oil revenue from transnational oil companies goes directly to support Sudan's military, which in turn prosecutes the genocide. PetroChina, Oil India and Petronas, some of the largest oil producers in the country,  appear on the Comptroller list as of 2007 and are invested in by UTIMCO.

Nature of the genocide in Sudan

However, the major driver of ethnic violence in Sudan remains religious in nature.

The United States Commission on International Religious Freedom, or USCIRF, produces annual reports on religious persecution around the world. In its latest annual report, the commission upheld its statements that minority, non-Muslim groups in the country are being killed for their beliefs by the Sudanese government of President al-Bashir, the first sitting head of state who is wanted for war crimes and genocide by the International Criminal Court.

Narikan said the violence that forced him from his village was due to religious persecution.

“They were trying to make everybody go by what they culturally allowed,” Narikan said. “They try to convert everyone to Islam, to follow Sharia law. Probably 90 percent of [the conflict] was that.”

Texas A&M President Michael Young was appointed to USCIRF in 1998 by President Bill Clinton, and served in 2004 as chairman when the commission found some senior Sudanese government officials calling for “jihad” and an overall pattern of egregious human rights abuses against Christians. That same year Congress officially declared the abuses in Sudan to be genocide.

President Young’s work on USCIRF and his background in international law make him an expert on human and religious rights. Young does not have any direct say in UTIMCO investing policy. While he denied to comment for this article, he has commented previously about his experiences with the Sudan genocide.

“I met Sudanese who had left the Nuba mountains or had left their refuges to secure food and supplies being transported by train under the direction of the United Nations,” Young said in a 2007 address at the University of Utah. “As these people approached the trains, the government of Khartoum sent airplanes to strike those trying to get supplies.”

What Young heard from the survivors of the ethnic violence in Sudan is consistent with the findings of USCIRF during his tenure and the experiences of other refugees like Narikan.

UTIMCO companies involved in the genocide

Young also served on the Commission in 1999, when it asked the U.S. Treasury Department to extend sanctions to the China National Petroleum Corporation, CNPC, the national Chinese oil company, on the grounds that their oil interest in Sudan funds a, “war against the south ... patterns of forced conversion to Islam, manipulation of food aid, bombing of refugee camps, hospitals, churches, and other civilian targets, as well as enslavement.”

UTIMCO invested in CNPC in 2014 with $494,858 through PetroChina Company, a subsidiary that is approximately 90 percent owned by CNPC. Both CNPC and PetroChina appear on the Comptroller list of banned companies funding genocide in Sudan.

CNPC  has been accused of direct involvement in the genocide by University of Pennsylvania professor John Ghazvinian. During the second Sudanese civil war, CNPC built a 900-mile oil pipeline from their wells in Central Sudan to the Red Sea. In his book “Untapped: The Scramble for Africa’s Oil,” Ghazvinian said thousands of Christians and non-Muslims were killed or displaced in the process, and locals report that their villages would first be bombarded by the Sudanese Air Force and quickly followed by CNPC bulldozers and soldiers burning huts.

This pattern is all too familiar with the violence that forced Narikan from his home years before. In 2005, he left Kenya, where he had been living for 10 years, as part of a program that resettled 3,500 of the Lost Boys of Sudan in cities around the United States.

Assimilating to a new culture was difficult, but Narikan worked at a grocery store for several years while earning his GED and eventually graduating from the University of North Texas in 2011.

He  is currently running a GoFundMe campaign to raise money for a drinking well in Kikilai, a village in the area where he was born that remains relatively isolated from the continuing violence in Central Sudan. Narikan returned to his home village in South Sudan in 2011, seeing his family for the first time in 11 years, and noted the ongoing destruction in the country. He hopes his campaign for a water well is one small step in putting the country back together.

“I still remember how it looked,” Narikan said. “I see a lot of people mixed up with different tribes, but it’s going to take time.”

This is Part One of an investigative series into Texas A&M’s investments in companies tied to human rights violations. The series’ articles will be published throughout the week in The Battalion, as well as at thebatt.com.

Ask where the money goes before investing

Throughout the process of investing the $17.2 billion in the joint endowment between Texas  …

The $17.2 billion in the joint endowment between Texas A&M and the University of Texas p…

Today The Battalion will be awarded the Betty Gage Holland Award for a three-part series printed last fall. Written by Spencer Davis, the inve…