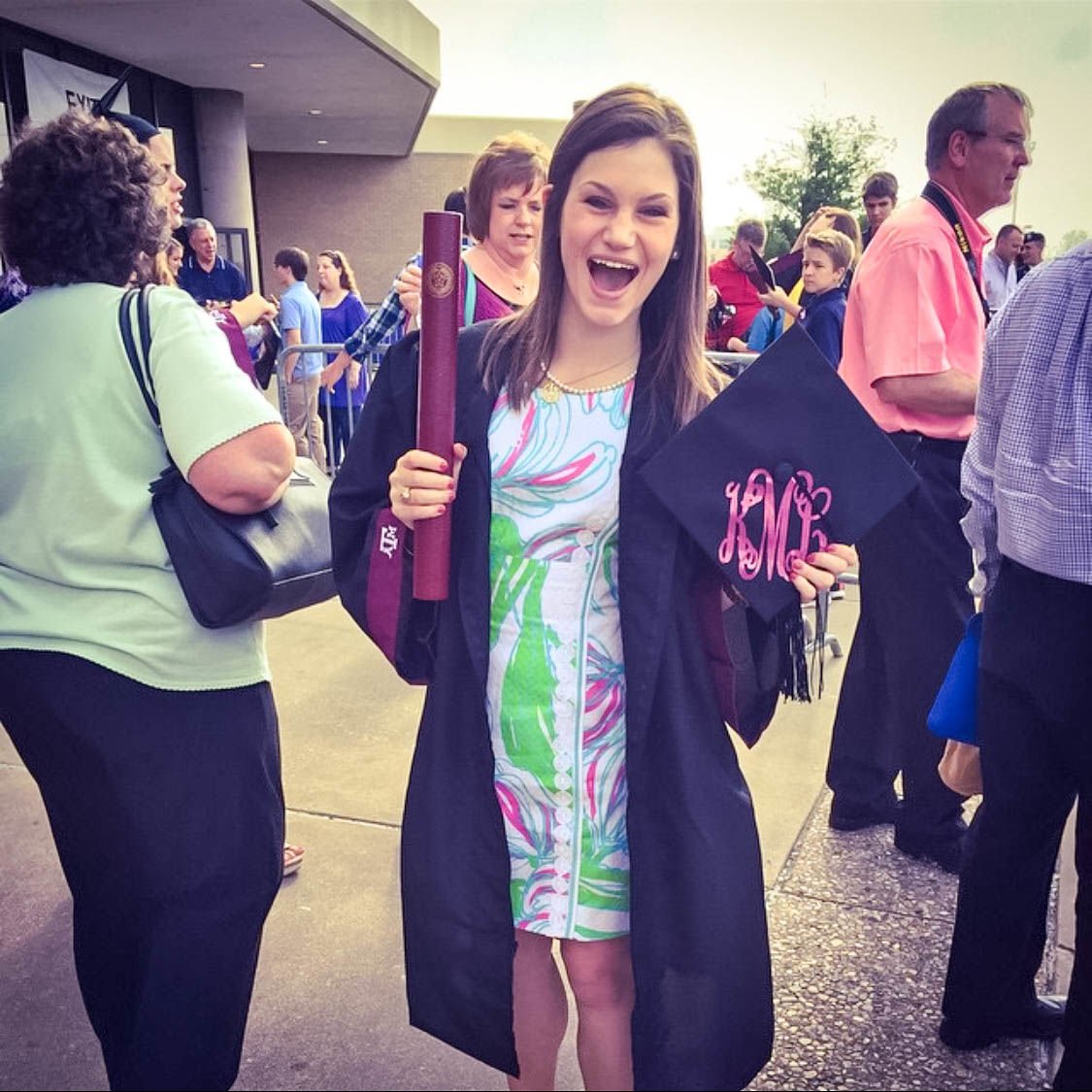 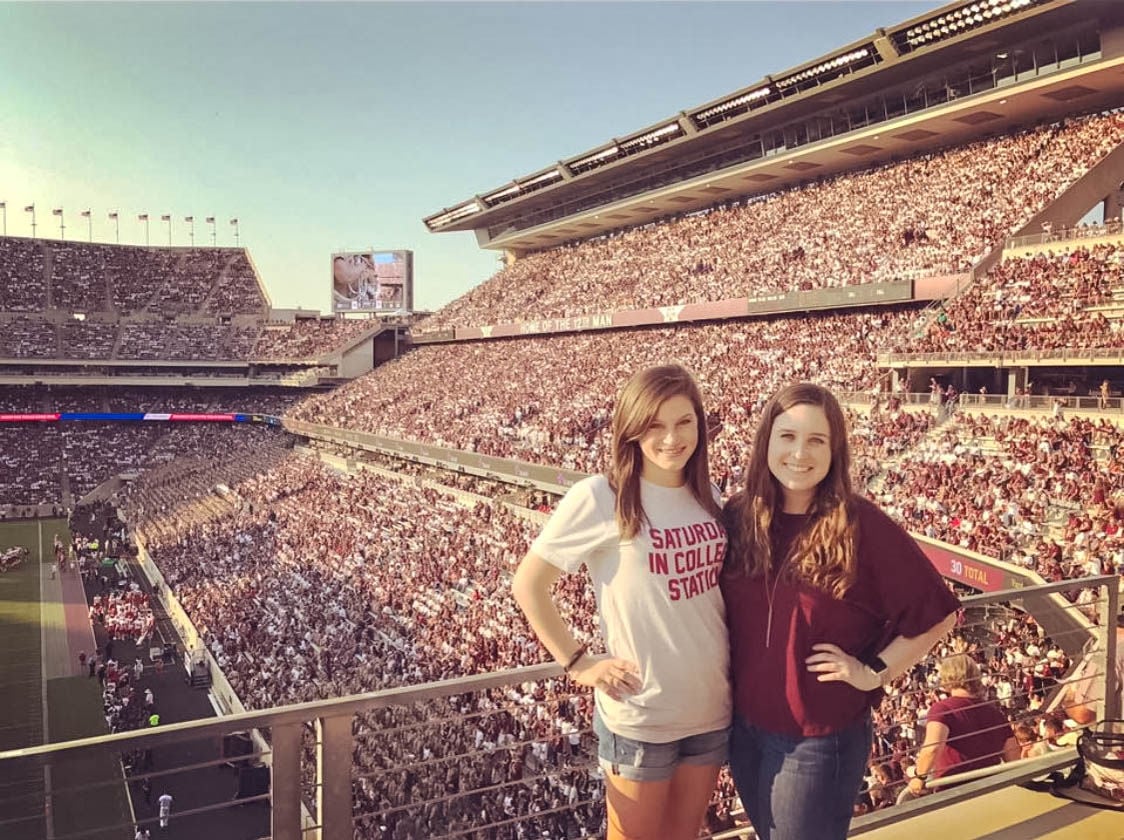 Kristen Moss’s family and friends all agree that she was the life of the party. Her funny one-liners, incredible style and positivity will never be forgotten.

Kristen, originally Class of 2015, returned to Texas A&M to pursue her master’s in public health. Kristen’s father, Scott Moss, and the rest of her family were proud to add another Aggie to their family, following her older sister, uncles, grandfather and cousins.

Born with a heart condition, Kristen never lost faith or strength — something that inspired her friends, family and everyone she met.

“My dad, when she was going through all those surgeries, said ‘She’ll surprise you one day,’” Scott said. “I guess she did surprise a lot of people that she did so well.”

Kristen’s older sister, Katie Zamora, Class of 2011, reminisces on their daily interactions, whether that was attending a Shania Twain concert or sending each other memes. Katie and the rest of her family remember Kristen’s many talents, from dancing to knitting to writing.

“She was a great writer and you could hear her voice through her writing,” Katie said. “Her Twitter account is hilarious. She has so many one-liners, and it’s so funny. I’m like ‘How did you even think of that?’ Just the stuff that goes through her head.”

Sarah Caffey, Class of 2011, worked with Kristen at the Institute for Infectious Animal Diseases. According to Sarah, Kristen brought life into the office through her style. Kristen started “Tassel Tuesday” at their office, when all the girls would wear tassel earrings to work.

“It doesn’t matter how long that you’ve known someone, but that you can really make a difference in someone’s life,” Sarah said. “I feel like Kristen touched people in our office in that way. She was just truly good inside and out. I think that she taught that to a lot of the people who were around her.”

Kristen and her health promotion group had a bowling social in the spring of 2018. In a statement from Gabi Duhon, Hannah Hoffman, Jonathon Rodriguez and Sarah Sanchez, they describe a moment when everyone was dancing and suddenly a drink fell onto the floor, causing everyone to shift their attention.

“Everyone turned around and saw Kristen looking down with guilty eyes,” the statement reads. “She finally looked up at us all, put her hands up in the air, and said, ‘It was me.’ We all immediately busted out laughing and from then on it became a signature quote that we would all say.”

In their statement, Kristen’s friends describe the way she always reminded them not to take things too seriously, but when it was time to study she would make sure everyone was doing what they needed to.

“It was Kristen, who when told the hardest news of her life, turned to God for support,” the statement said. “It was Kristen who continued to fight and be optimistic through it all. Little did we know that through all of this, it was Kristen who brought us all closer together. It was you; Kristen, who has inspired us all and changed our lives forever, and we will never forget you. You will be with us until graduation, and way beyond that. We will miss you constantly, but we will always be thinking of you.”

Hannah Falcon, Class of 2021, studies telecommunication and journalism and was a Life & Arts reporter and editor.

Thank you so much, Hannah, for a beautiful, well written testimony of Kristen's life and Aggie experience. And thank you Ags, for the Silver Taps ceremony and for coming to the ceremony Tuesday night. Being an Aggie always meant so much to Kristen, and all of you proved why she loved it so much. In this day and time where folks do not go out of their way to do some things, you Aggies proved once again why there is a difference in culture and caring at your University than at other schools. While I think Kristen considered herself very modern and up to date, she cherished traditions, especially those at Texas A&M. Aggies are so unique, and there are those that say traditions need to be changed,but I would say, "why change a good thing?"
Again thank you so much, whether you know it or not, your commitment to a tradition helped several grieving families, and the Spirit of Aggieland does not bring closure to us, but a feeling that she will always be alive there with us when we walk through the Live Oaks, and that is neat to know she is there and with you.