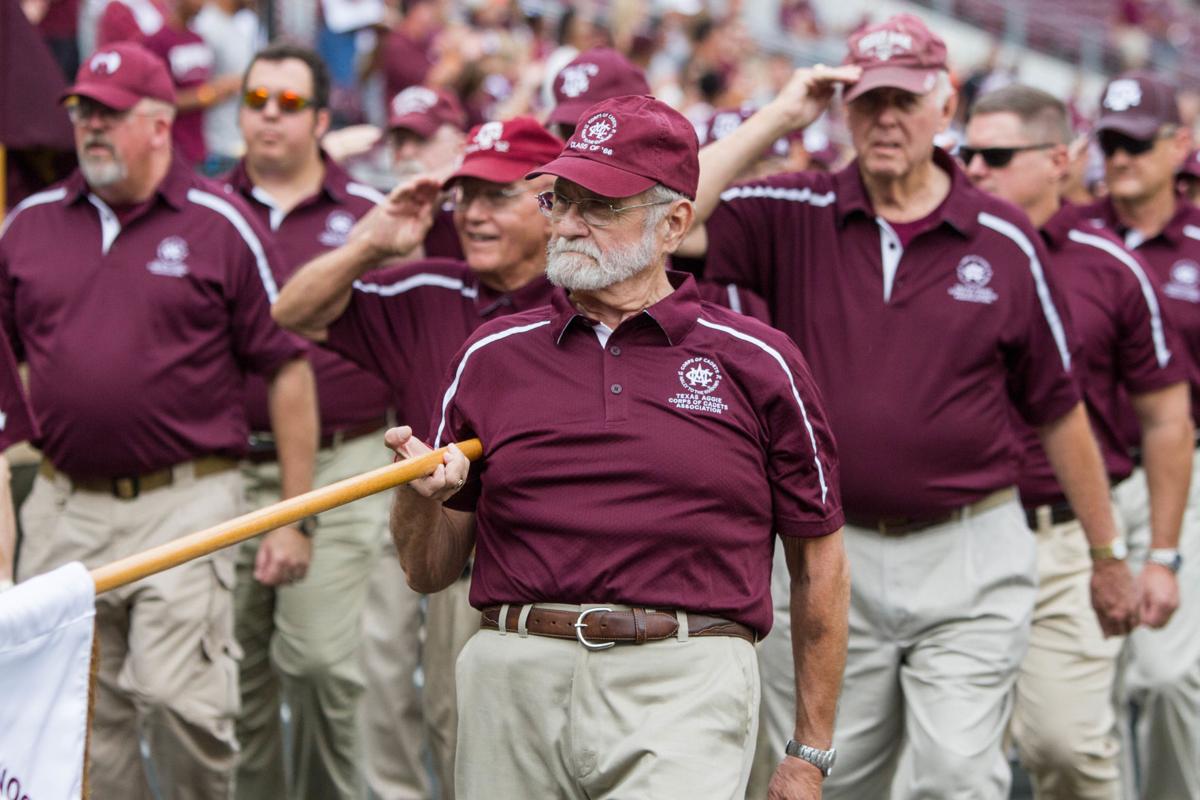 Mike Beggs marches into Kyle Field during Rally to the Guidons on Nov. 5, 2017. 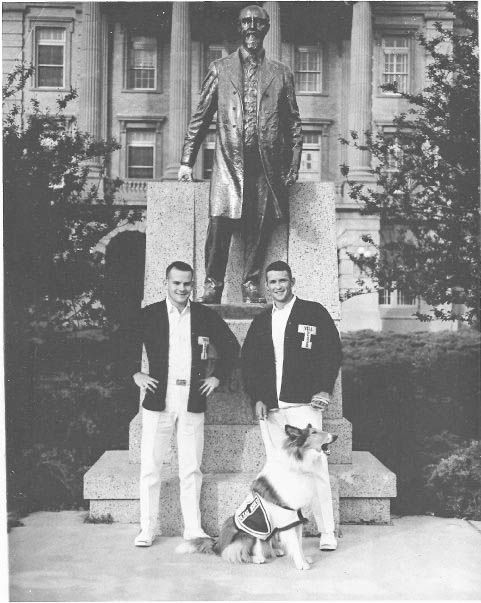 Junior Yell Leaders Don McLeroy and Mike Beggs with Reveille III in front of the Sully Statue in 1966. 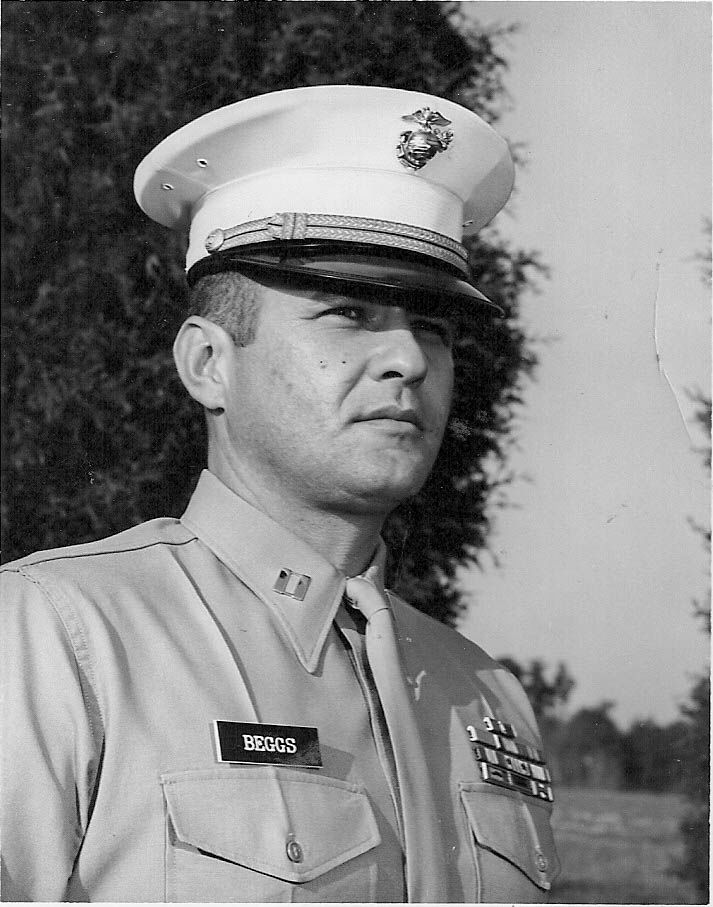 Mike Beggs was a Yell Leader, Ross Volunteer and still serves as a class agent for the Class of 1968.

Mike Beggs marches into Kyle Field during Rally to the Guidons on Nov. 5, 2017.

Junior Yell Leaders Don McLeroy and Mike Beggs with Reveille III in front of the Sully Statue in 1966.

Mike Beggs was a Yell Leader, Ross Volunteer and still serves as a class agent for the Class of 1968.

Mike Beggs, Class of 1968 and former Yell Leader, nearly lost his life after stepping on a landmine in the Vietnam jungle in January of 1971. Beggs was airlifted out of the jungle and taken to safety, and years later he found out the person who saved his life was someone he endured his freshman year in the Corps of Cadets with.

Beggs, who at the time was serving as the commander of the Combined Unit Pacification Program of the 3rd Battalion, 5th Marine Regiment, was walking through the jungle when his unit began taking fire.

“I stepped on a land mine,” Beggs said. “I was very fortunate that — first of all — it didn’t kill me. Second, it didn’t take any of my legs or arms, as they normally do. Particularly the thing I stepped on, which was an artillery shell.”

The mine, which according to Beggs did not completely explode, caused temporary paralysis below his waist and temporary blindness.

“The explosive charge that they had packed the shell with didn’t fully detonate,” Beggs said. “It did enough to cause me significant damage, but not enough to kill me or rip legs off. The stuff that flew into my eyes had blinded me temporarily and apparently I pinched some kind of nerve where I couldn’t feel anything from the waist down.”

The location where Beggs suffered his injury was a dense portion of the jungle where it would not have been easy for a helicopter to land. According to Beggs, the only way for him to be taken out of the combat zone was with a piece of equipment known as the ‘Jungle Penetrator.’

“Three things could happen when [the Jungle Penetrator] was deployed and two of them were bad,” Beggs said.

According to Beggs, although the Jungle Penetrator would make it to the ground, there was no guarantee it would make it back up. If the lift were to get stuck in the trees and anchor down the helicopter, soldiers would be forced to cut the wire. Another risk was the line attached to the helicopter could snap, sending the injured soldier to his death.

“The third thing that could happen was that things would go as they were supposed to and the wounded Marine would get hauled up into the helicopter and taken to medical treatment,” Beggs said.

Due to the safety concerns, the Jungle Penetrator had been ordered to not be used. However, once the pilot, known to Beggs as Peachbush 1-7, heard the severity of Beggs’ injury, he disobeyed orders and used the device. Luckily for Beggs, the ex- traction was smooth and before he knew it, he was on the CH-46 helicopter being transported to the nearest hospital.

“I feel hands pulling me inside [the helicopter] and untying me from the Jungle Penetrator and the corpsman who was in the helicopter knew that I couldn’t see anything, so he bends down and tells me — while the sniper is shooting at the helicopter — ‘You’re going to be okay,’” Beggs said.

After this, Beggs said he lost consciousness. However, he said he was ‘one happy Marine lieutenant’ once he woke up and realized he could see, still had his legs and could wiggle his toes.

Nearly 40 years later, Beggs and several of his classmates who were members of Squadron One were corresponding via email after Ed Freeman, helicopter pilot who was a recipient of the Medal of Honor, had died.

Beggs said the response he got from the email changed his life.

“About five minutes later, I get another email message from one of those guys that was on the list and it was from Charlie Rodenberg, my fellow classmate and fellow Hustlin-1 buddy,” Beggs said. “The entire text of that message said, ‘Mike, Peach- bush 1-7 was yours truly. Semper Fi, Charlie.’”

Beggs said he couldn’t believe the man who saved his life, despite the danger, was a classmate.

“Forty years. Not only an Aggie, but a classmate [and] an outfit buddy that saved my life,” Beggs said. “I picked up the phone, I called him and we chatted and I thanked him for saving my life.”

“Charlie Rodenberg was the type of man that would always do what needed rather than what was permissible,” Beggs said. “Peachbush 1-7 has checked off the net but never out of our hearts. Godspeed Charlie. All my life, a classmate and a friend saved my life. ... I am here because of Charlie Rodenberg.”