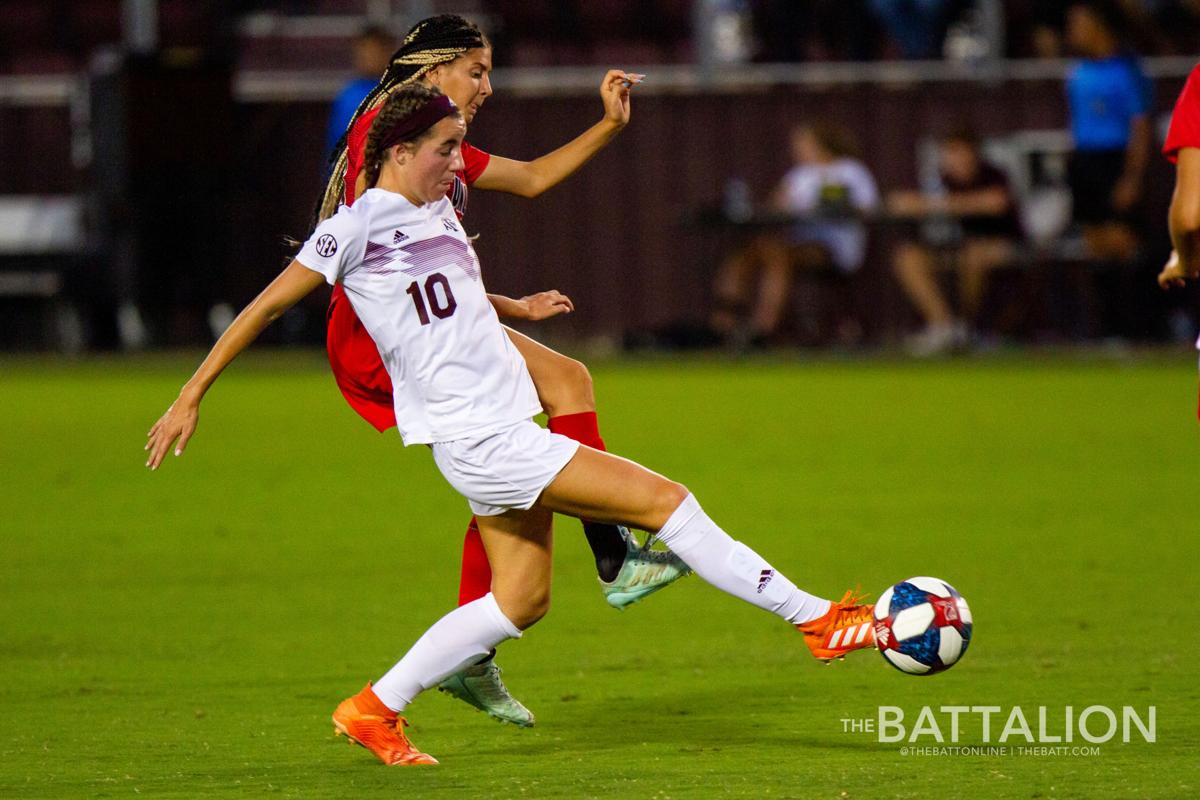 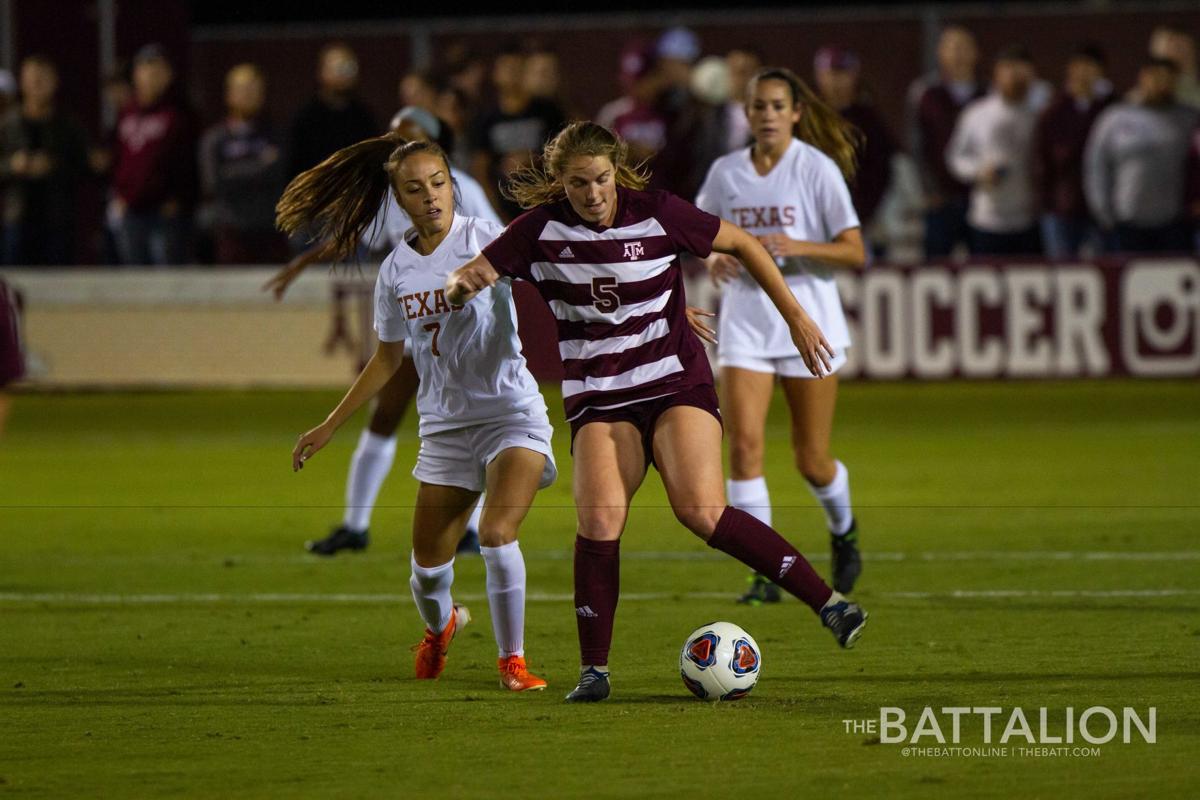 While some siblings are rivals in sports, the Ziemer sisters thrive off of each other on the field.

Texas A&M soccer sisters Taylor and Tera Ziemer do just about everything as a duo. However, this will be their last year together on the pitch at A&M with Taylor entering her senior season.

Junior midfielder Tera and senior midfielder Taylor come from a long line of athletes. They grew up in a soccer family, and the two sisters are around each other on and off the field.

This is Taylor’s second year playing for the Aggies. For her freshman and sophomore year she was playing for Virginia, and she also took some time to play in Europe in 2018.

Taylor said everywhere she has played has been different.

“It’s a lot different, just being in Texas versus Virginia,” Taylor said. “Very different culture, the pride of A&M is not something I ever experienced before. Everyone in College Station bleeds maroon, so that is a different experience for me. I lived in Europe and played soccer in Europe for a year between the two. Having played in Europe where it was a lot different physically and then coming back to the states, the SEC was just a lot different.”

Tera, on the other hand, is entering her third year as an Aggie. Though she hasn’t had to adjust to multiple team environments like Taylor has, Tera said each of her years in College Station have forced her to adapt.

“Each year, I've been impacted in different ways by different people,” Tera said. “The seniors, the culture of the team each year is different. In general, I think I've grown as a person and matured and learned to handle things.”

Taylor picked A&M so she could have more quality time with Tera.

“I picked A&M [because] my sister was here,” Taylor said. “She really spoke well about the program and she loved it. I wanted to go to school with her and experience playing with her... Getting to play with my sister and getting to live with her was something that was really exciting for me.”

The transition to playing on the same team together was simple, Taylor said, and the two have a lot of fun playing together.

“Playing with Tera is really very easy,” Taylor said. “She knows the game so well. Playing next to somebody who can see the game so well and has such great vision to play balls and make certain runs is really, really fun.”

The reason the sisters know the game so well is because of their family history with the sport.

“My dad is a college soccer coach, my mom played at Santa Clara and she went to two Final Fours. My uncle coached a professional team, it’s just a whole thing,” Taylor said. “It’s a family affair.”

A defining moment for the sisters was during the team’s first game of the 2019 NCAA Tournament against Texas, when both of them scored goals. Taylor scored the first goal of the game for the Aggies, which tied up the score at 1-1. Tera’s goal followed, putting A&M ahead.

“Scoring that goal is the highlight of my entire soccer career I would probably say,” Tera said. “It was kind of like the culmination of what felt like at least 16 years of work put into soccer. Just scoring that and being put into the field and thinking in the moment all I want to do is complete a pass and not mess up, and then to get in and be put in that situation and to score was so incredible.”

Taylor said she felt the same way about her own goal.

“That was so epic,” Taylor said. “Finally scoring that goal, we had been killing them, we knew that we were gonna come back, we just needed to open the floodgates. To start the scoring, and to just score that goal, and to have the fans in the crowd go wild, it was just an incredible feeling.”

A&M soccer coach G Guerrieri said the pride each sister has for the other is special, and it was exemplified in their reactions to each other’s goal against Texas.

“I know that the goal that the other one scored probably meant as much as the one that she scored,” Guerrieri said. “When Tera scored the equalizer, I think the first person to her was Taylor. I think when Taylor scored that bomb at the end of the first half to put us ahead, it was a terrific finish, but you could see the excitement with Tera more than anyone else. Just the pride they have with each other, the real [and] genuine love they have for each other is refreshing.”

Not only do the sisters have a great on-field dynamic, but Taylor said they have a great relationship off the field as well.

Tera said their sisterhood is evident in their play styles, which, though similar, also show each sister’s individual personality.

“Taylor and I play very differently, but also similar in that we both appreciate the game I think and play with that in mind,” Tera said. “Taylor is definitely more aggressive and goes forward more, shooting, all that kind of stuff. I do more passing and that kind of stuff.”

Tera is redshirting this year to focus on herself and to prepare herself for her final season as an Aggie, which means she will not be able to play side-by-side with Taylor during her sister’s final season.

Guerrieri said the sisters’ love for each other shows on the field.

“They love each other as sisters and they look out for each other,” Guerrieri said. “They have an innate feeling for where the other one is all the time, so there's a really good kinesthetic sense between the two of them.”