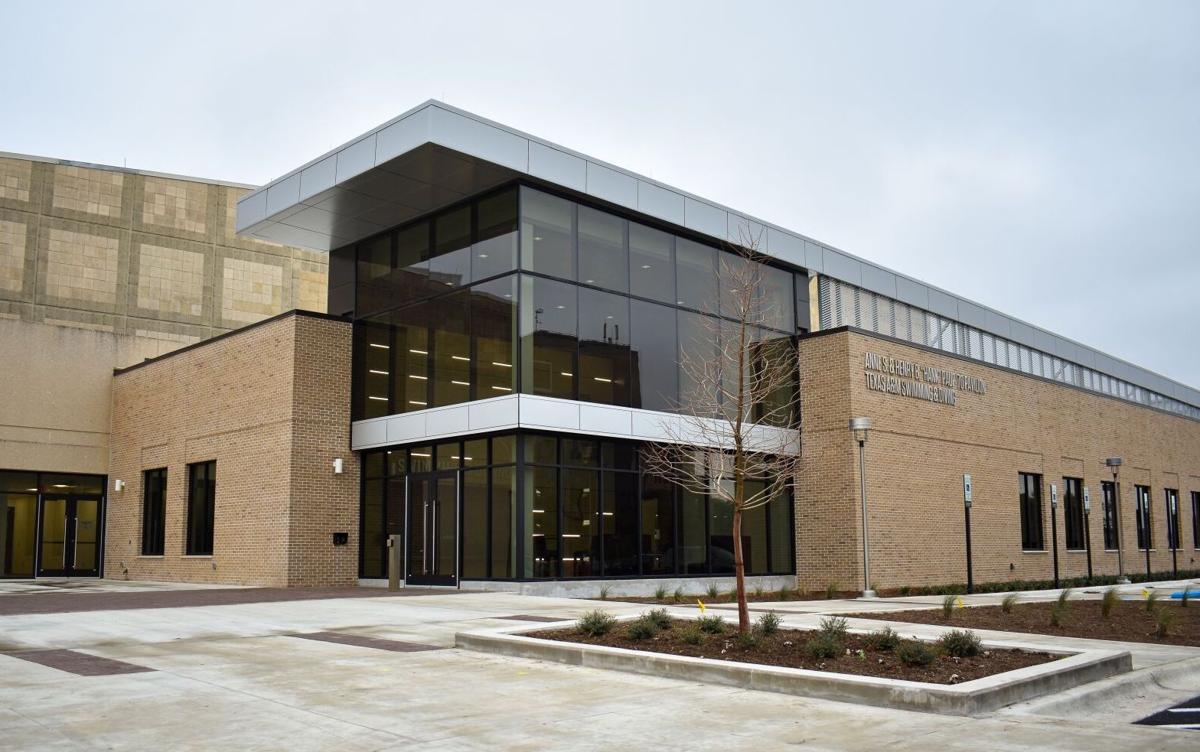 The Texas A&M swimming and diving program unveiled its new facility, the Anne S. and Henry B. "Hank" Paup '70 Pavilion, on Jan. 22. Former A&M swimmer Hank Paup was the lead donor on the $7.8 million project. 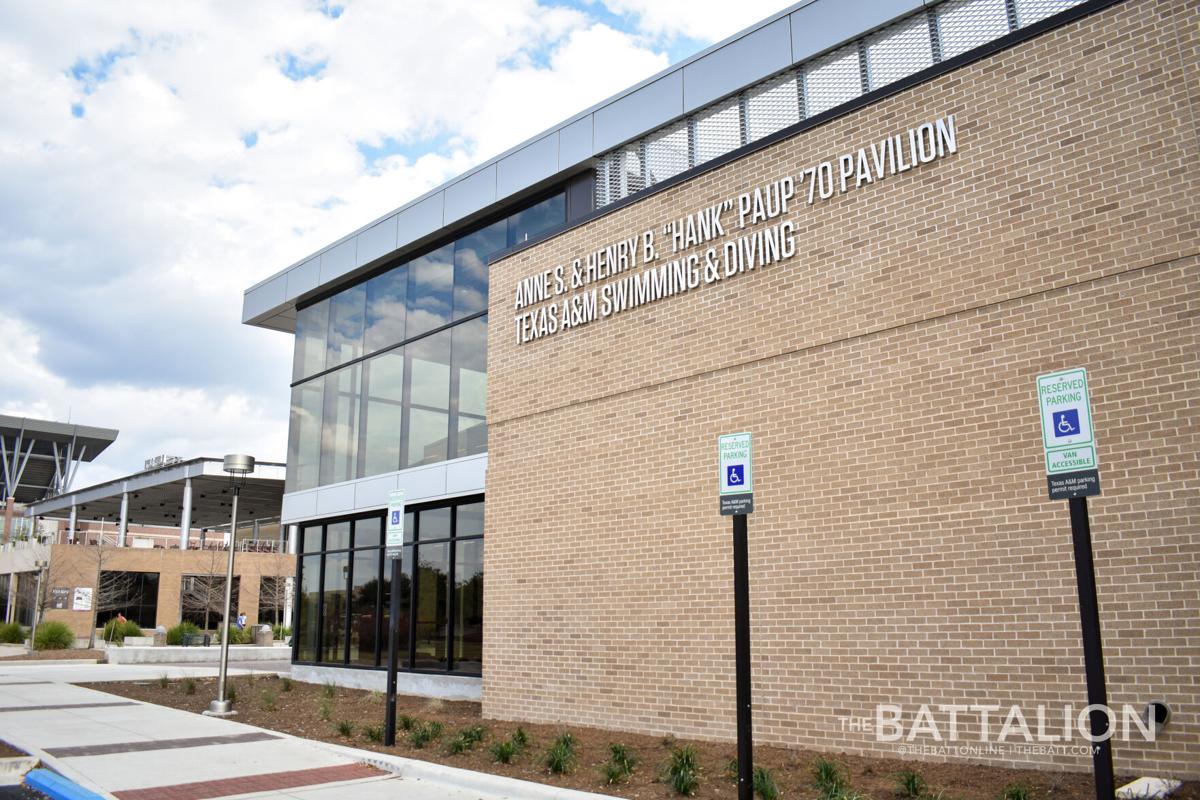 Over seven years in the making, the Texas A&M swimming and diving program’s new facility is finally complete.

The Anne S. and Henry B. “Hank” Paup ‘70 Pavilion, which had its grand opening on Jan. 22, includes a dryland diving center, new locker rooms, an athletic training room, coaches’ offices, meeting and conference rooms and a new entryway with an exterior lobby.

A member of A&M’s swim team from 1966 to 1970, Henry “Hank” Paup was the lead donor on the $7.8 million project and said he wanted the facilities to complement the pool.

“We have an outstanding natatorium that was built in 1995, and it is still state-of-the-art,” Paup said.

Though the program added a new eight-lane, 25-yard pool and renovated its 50-meter pool in 2018 according to swimswam.com, the rest of the facility was lacking, Paup said. The coaches’ offices were located at Reed Arena, the team’s home dressing rooms were not adequate and there was no locker room for visiting teams.

“It was very clear that we needed to build a facility adjacent to the pool that would make it compatible for all these things that it was lacking,” Paup said.

The Paup Pavilion was designed by architectural company Populous, which renovated Kyle Field in 2015 and has been involved in football stadium setup for every Super Bowl since 1995, according to its website.

Paup first reached out to men’s coach Jay Holmes about the swim facility’s upgrades in 2013, but he said it wasn’t until 2017 that the ball got rolling after Holmes and 12th Man Foundation President and CEO Travis Dabney reached out to him about financially supporting the construction of the pavilion.

After getting other donors on board — including other former swimmers, parents of current swimmers, members of the 12th Man Foundation and others interested in enhancing A&M athletics — and hiring an architect, the project was approved by the Board of Regents and they broke ground on the new facility in October of 2019.

Women’s coach Steve Bultman said while the construction of the facility could have started about seven years ago, he knew it would be better for the program to wait for a larger renovation.

“Jay and I kind of understood that this might be the only time they’re going to do a big expansion like this, so we figured it was better to wait and get most of everything we wanted,” Bultman said. “Even though it didn’t happen quite as fast as we wanted, we got pretty much all the essentials that we really want.”

Holmes and Bultman both were able to have a say in the design of the new facility, though Holmes said the scope of their input was limited.

“We were in on all of the design meetings, so they were for sure asking us our opinion,” Holmes said. “A lot of times it came down to choices — ‘You can’t have A, B and C, which two out of the three do you want?’”

Paup said he took a fairly hands-on approach to the design of the project.

“Being the lead donor, I had a vested interest in it,” Paup said. “It’s like building a new house. Of course, I’m a lawyer and lawyers think they know everything, [so] I think I’m an architect as well. I actually got the architectural plans and made several suggestions for how to modify it to what I thought would be satisfactory. Of course, all of those were rejected because they know I’m not an architect.”

After the COVID-19 pandemic began, Paup said he continued to make trips to College Station from his home in Fort Worth to see the progress. During one weekend trip, he met construction superintendent John Schilling, who Paup said was surprised to meet the namesake of the building he was working on.

“He said, ‘I’ve built lots of buildings that have been dedicated to people, but you’re the first person I’ve ever met that was alive. All the others were dead,’” Paup said.

Paup may be the youngest namesake of one of Schilling’s buildings, but his legacy at A&M extends far beyond the Paup Pavilion.

In Aggieland, Paup spent his time doing what he called the “three S’s: swimming, studying and soldiering.” Not only was he a walk-on to the swim team where he set program records in the mile and as part of the 800 free relay team his junior year, but Paup was also a member of the Corps of Cadets during his time at A&M, eventually becoming the commanding officer of his outfit in his senior year.

Paup said what he learned about A&M’s Core Values during his time in Aggieland have guided him in his life, and he has been able to pass those traits down to his son, Class of 2001, and daughter, Class of 2007.

“Our six Core Values, if you didn’t know them before you can sure learn them at A&M, and you carry them throughout your life,” Paup said. “My law practice is a very disciplined law practice. It’s allowed me to achieve what I hoped to in life. Some of the skills and elements philosophically that I learned at A&M I’ve been able to pass down to my children and hopefully my grandchildren.”

Paup’s involvement with A&M and the swim program didn’t end with his graduation in 1970. In addition to the facility, Paup said he created an endowment with the program around 2007.

In front of a crowd of 200 socially distanced throughout the 1,100-seat natatorium, Paup concluded his speech at the dedication ceremony by revealing a surprise he said had been in the works for a while: A swim-off between him and men’s team co-captain Clayton Bobo.

“I had done virtually zero training for it. I had swam during the summer, but when the outdoor pools shut down, the indoor pools didn’t open,” Paup said. “[Bobo is] a sprinter, and Clayton can swim 50 yards in about 20 seconds. My fastest time as a distance swimmer was only a 23.”

To even the competition, Bobo was required to swim 50 yards while Paup had to complete only 25.

“I had my speedo from 1970 with me — I threatened to wear it, but I didn’t,” Paup said. “So I’m swimming the 25 yards from the far end of the pool to the finish line, Clayton’s going down and back.”

“I’m a right side breather, so I made sure he was on my right side. I’m just kind of loafing along, having a good time. All of a sudden, he was wearing a blue suit, and this blue streak comes sailing by me. With about five yards to go, he finishes first easily. He beat me by maybe a body length at that point. The audience was just cracking up.”

Someone on A&M Director of Athletics Ross Bjork’s staff later told Paup that Bjork said it was the “most incredible building dedication he had ever attended.”

Bjork wasn’t the only one impressed with the grand opening though. Holmes said several of the former athletes in attendance enjoyed seeing the new facility.

“I think a lot of them were pretty excited as well just to be able to see it,” Holmes said. “That excitement is contagious, that excitement is going to carry us for a while with our former swimmers and divers because they see the vision, they see what’s happening. I already had a couple of them call me like, ‘Jay, we knew it was going to be awesome, but that was great.’ At some point we’re going to have more people that are following our program as they see what’s happening.”

For senior Mark Theall, the updated locker rooms are a refreshing change.

“The old locker room was super cramped, and this one [has] a ton of space and it just looks super nice and luxurious,” Theall said. “It’s like we’re in a five-star hotel every time we go to change.”

“We can get out of the pool and go straight to the hot tub, cool tub, get needles, whatever we need,” Toney said. “It’s just super convenient and everything’s new so that’s super nice.”

With the pavilion, the swimming and diving program finally has a complete place to call its own, Holmes said.

“We have something that is ours,” Holmes said. “The pool itself is a great pool, but we didn’t have the support structure around it.”

Bultman said the biggest benefit to the new facility will be in recruiting. Now, with their offices and the meeting and conference rooms inside the facility, the coaches have a place to host recruits that they didn’t have before.

“Our offices where we can actually do some recruiting here, as opposed to Sunday mornings where we would have — and hopefully we’ll get back to that eventually — official visits,” Bultman said. “We would have to meet somewhere else and really couldn’t see the pool or a nice place.”

A&M recently made renovations to Blue Bell Park in 2012, Kyle Field in 2015, Reed Arena in 2017 and added the softball stadium Davis Diamond in 2018 and the outdoor track stadium E.B. Cushing Stadium in 2019. The most recent upgrade puts the swim program on a level playing field with the rest of A&M’s campus, Holmes said.

“When you look at Texas A&M as a university and you see all the facilities, not just in the athletic department but all across campus, this fits right in line with the way the rest of our campus is,” Holmes said. “To be able to represent a place that’s able to do all this, I think that’s just a powerful message for people coming in and developing some loyalty and some pride in our university whenever they see all these facilities.”

The Paup Pavilion opens doors for the future of A&M swimming, Theall said.

“Swimming’s always been kind of a backseat sport it seems, and with this new locker room, it shows that swimming is front line and important here, which is super cool,” Theall said.

While it has been about seven years in the making, Bultman said the new facility was undoubtedly worth the wait.

“It’s been quite a few years that we’ve been talking about eventually we’re going to get this,” Bultman said. “Talk lasts only so long, but to see it actually done and completed, it looks awesome. A lot of the former swimmers and divers are very excited that it’s finally there.”

After everything A&M gave him during his four years in Aggieland, Paup said it only makes sense for him to provide something to the university.

“This is kind of an overused term, but Aggies give back to the school and enable them to achieve what we all hope to,” Paup said. “It’s a privilege to give back to A&M to enable young students to achieve and meet their academic and professional goals. I think that’s one of the best benefits of it, and seeing that happen for these young people like the Clayton Bobos of the world, like my son, like my daughter, it’s been a great experience.”