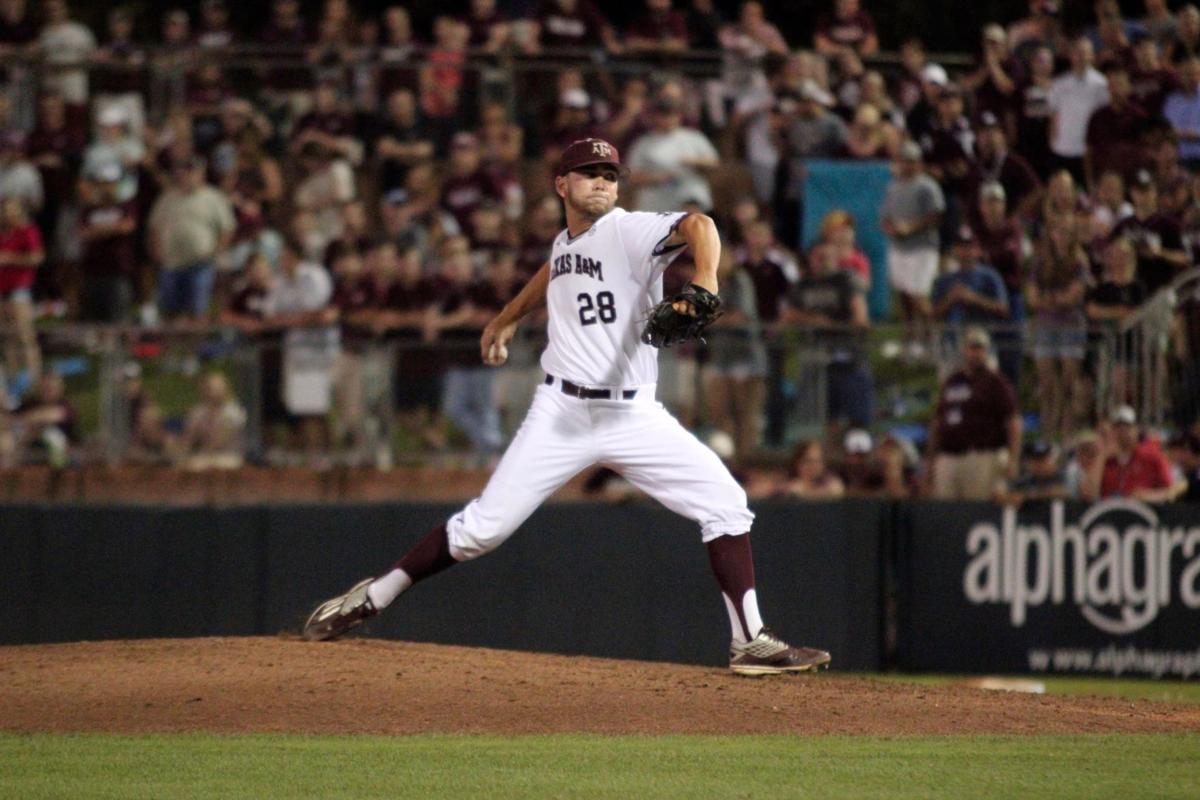 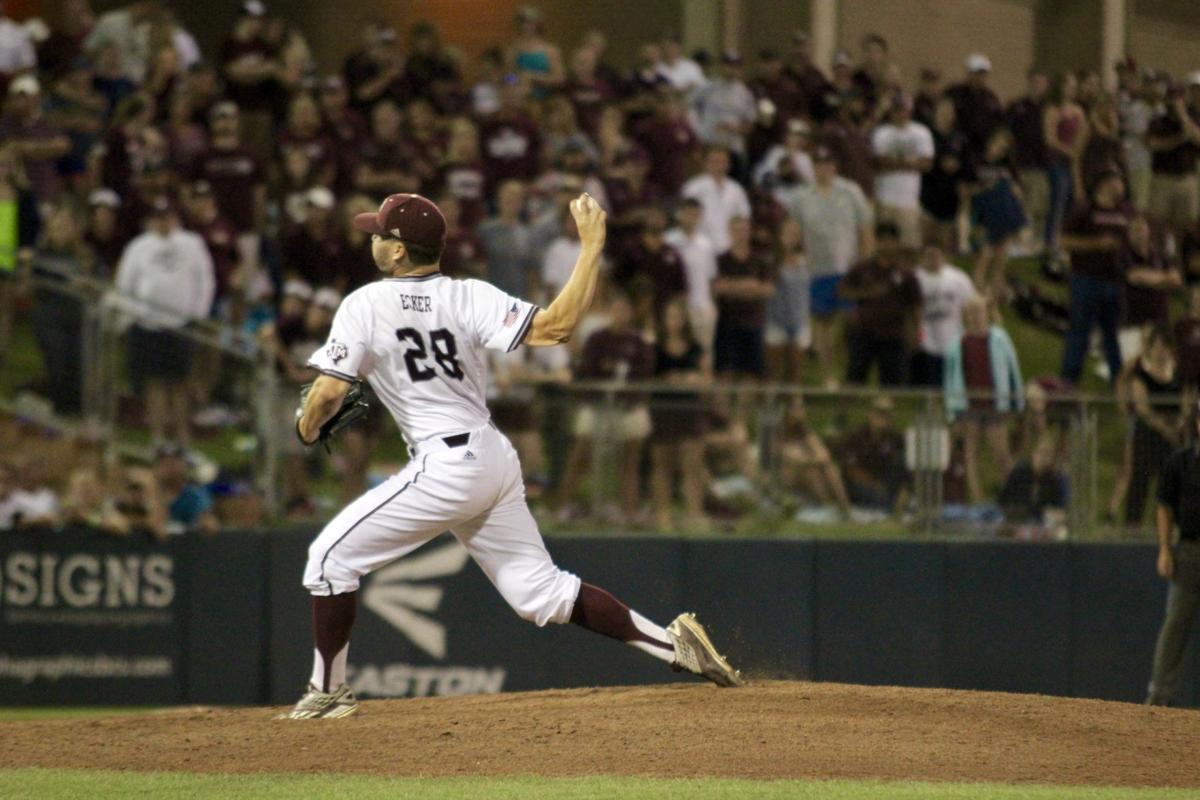 It was the third week of the 2016 season, and Mark Ecker found it. He really found it.

Despite never having thrown a changeup in his life, he had mastered the pitch. The grip felt right, the arm slot felt comfortable and his arsenal had just doubled in size.

Ecker played a major role in the Texas A&M bullpen last year—he worked in the back-end of the bullpen, put up solid numbers and threw an extremely hard fastball. However, he didn’t really have a good off-speed pitch to complement that fastball.

This season, the junior from San Antonio has blossomed into one of the best relief pitchers in all of college baseball, and the addition of that changeup is a big reason why.

“Just like that, the switch has turned with him,” A&M head coach Rob Childress says. “The changeup is there and the confidence is there and he’s been dominant.”

He struggled a bit down the stretch in 2015, to the tune of a 5.91 ERA in SEC play. He was at his best when the Aggies needed him most, though, tossing four scoreless innings in their 16-inning loss in game three of the super regionals against TCU.

But now with the changeup in full force, the 6-1, 195-pound Ecker has been nearly unhittable. He gave up his first earned run of the season back on March 12 against Fresno State, and then went more than two months without giving up another one, meaning he went through the Aggies’ entire SEC schedule unblemished.

What makes his changeup so effective is that he throws it from the same arm slot as his fastball—which consistently sits in the upper 90s on the radar gun—so to the hitters, it looks like the same pitch. However, the changeup is much slower and drops out of the strike zone once it gets to the plate, causing most hitters to swing over the top of it.

“His changeup is one of the best changeups that I’ve caught since I’ve been here and he just throws it and he puts it by guys,” says A&M catcher Michael Barash. “He just attacks and then his changeup just falls off that same plane until about ten feet, it just kind of fades away.”

Ecker’s scoreless streak finally ended at 32.1 innings when he surrendered a game-winning solo home run against Vanderbilt in the Aggies’ opening game of the SEC tournament, but his season stats are still mind-boggling. Heading into this weekend’s super regional rematch against TCU, he is 4-2 with a microscopic 0.41 ERA and 52 strikeouts in 44 innings.

His strikeout-to-walk ratio is an otherworldly 13:1 and he has also earned eight saves.

“He’s awesome, he’s really good and he’s been dominating this year,” Aggie shortstop Austin Homan says. “You don’t see many guys do that on the mound against this level of hitting.”

Not only has Ecker been nearly impossible to hit, he also has the ability to throw several innings at a time. It is something that most closers cannot do, and it only enhances his value to the team.

“It’s great for our team,” says A&M third baseman Boomer White. “We have guys who we think are setup guys, late-inning guys, closers, long-relief guys and Mark’s kind of a hybrid of all of them.”

Says Homan: “It’s huge; we can go to Mark in the fourth inning if we need to. You can’t put a value on that, it’s awesome.”

On three different occasions, Ecker has thrown at least four scoreless innings, and in two of those he didn’t allow a single hit.

“At the start of the season [Childress] wanted me to go at least three innings,” Ecker says. “I didn’t pitch much at the beginning of the season but he gradually extended me further and further each outing.

“I could throw a complete game if I wanted to out of the bullpen. My arm is in the best shape it’s ever been.”

In addition to having a durable arm, another reason that Ecker can stay effective for so long is that he can mix his pitches and keep the opposing team off balance. The fastball-changeup combo is filthy in itself, but he has also added a cutter recently that gives the hitters yet another pitch to think about.

All three were on full display last weekend in the College Station Regional, which A&M won with relative ease. Ecker tossed a scoreless ninth inning in the Aggies’ opening win against Binghamton and then struck out all four batters he faced to close out the win over Minnesota that punched their ticket to the Super Regionals.

Ecker, who was a starting pitcher at O’Connor High School in San Antonio, has not had trouble adapting to his closing role, something he attributes to Blue Bell Park and the Aggie faithful.

“Closing here [at Olsen Field], the atmosphere is electric,” says Ecker, who was recently named a second-team All-American by Baseball America. “It’s just a great feeling when you go out there and get three outs and close out the game for your team.”

As they prepare for their best-of-three series rematch with TCU, the Aggies know that they can count on Ecker to get outs in high-leverage situations. Whether he pitches one inning or five innings, his explosive fastball, devastating changeup and darting cutter allow him to have success no matter the situation.

And regardless of the inning or the score, whenever Childress decides to call on his All-American closer it is likely not a good sign for the opposition.

“He’s definitely a wild card that we have,” says Barash. “The opposing team knows that if he comes into the game in the sixth, the game is most likely over.”