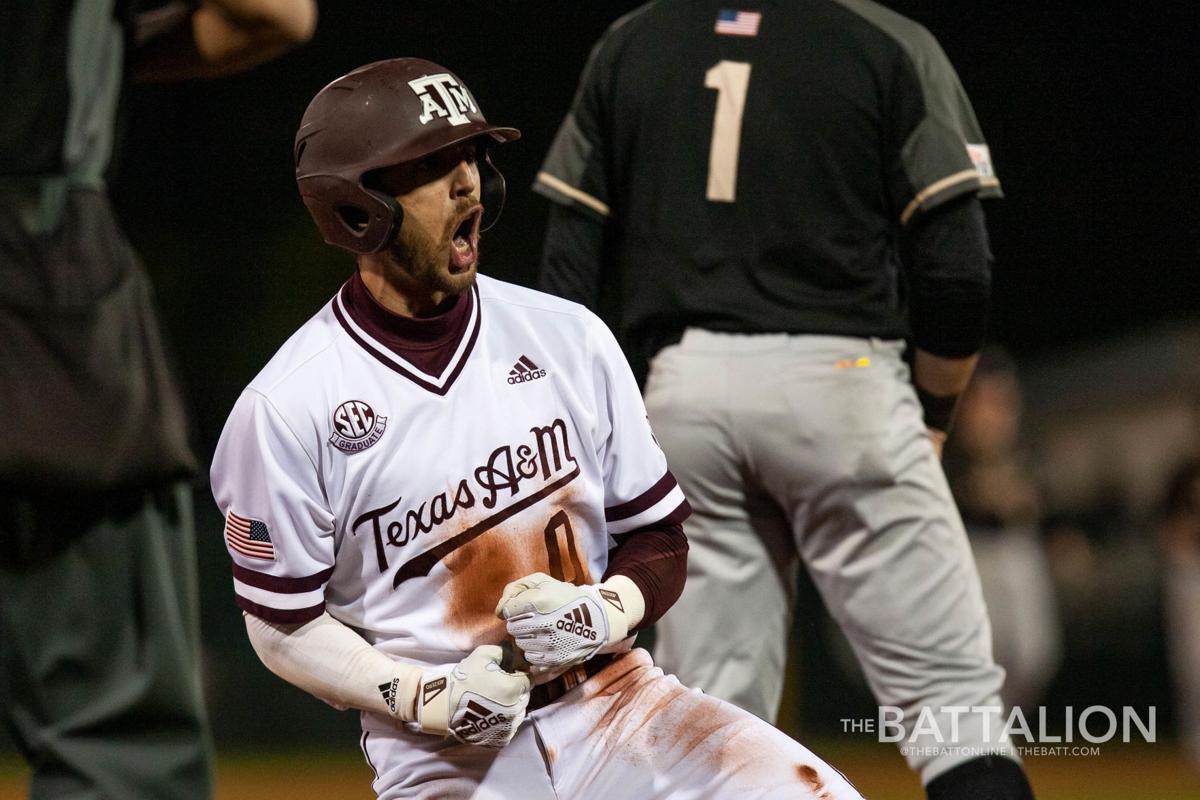 Center fielder Ray Alejo is in his fifth season of NCAA baseball, having spent time at Ole Miss and the University of Central Florida. 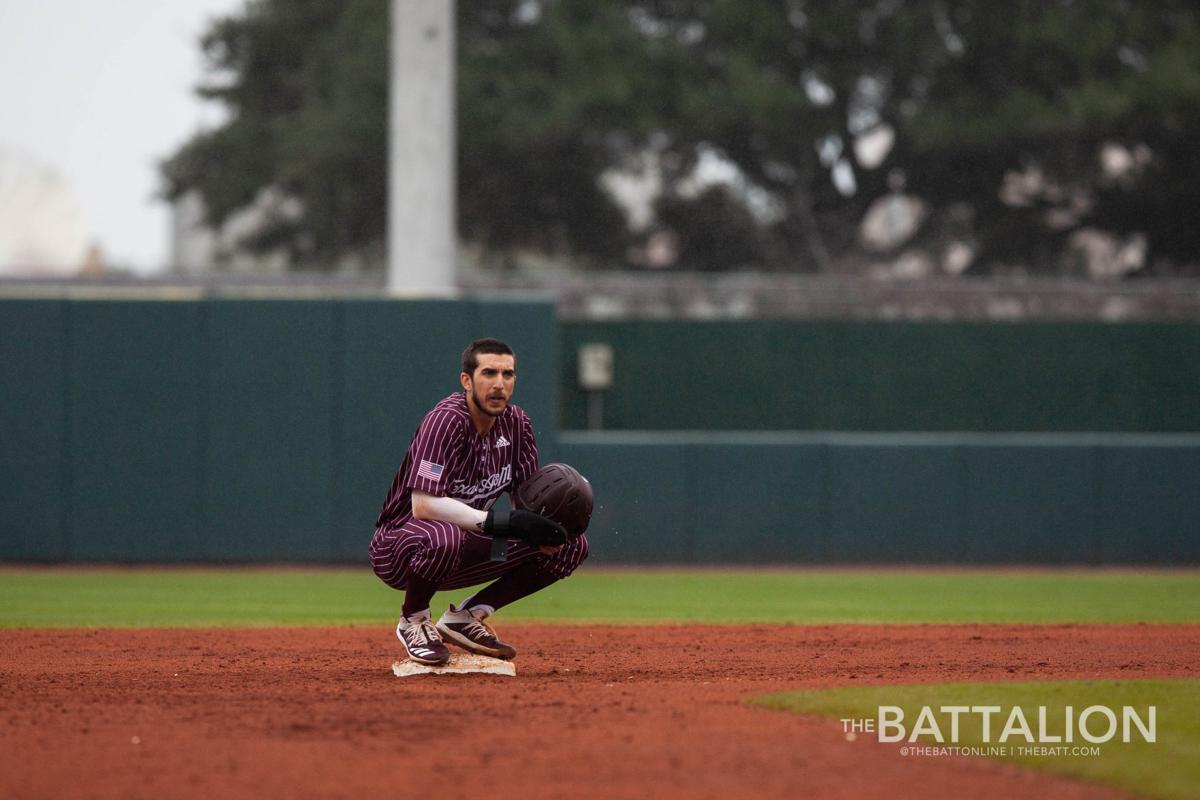 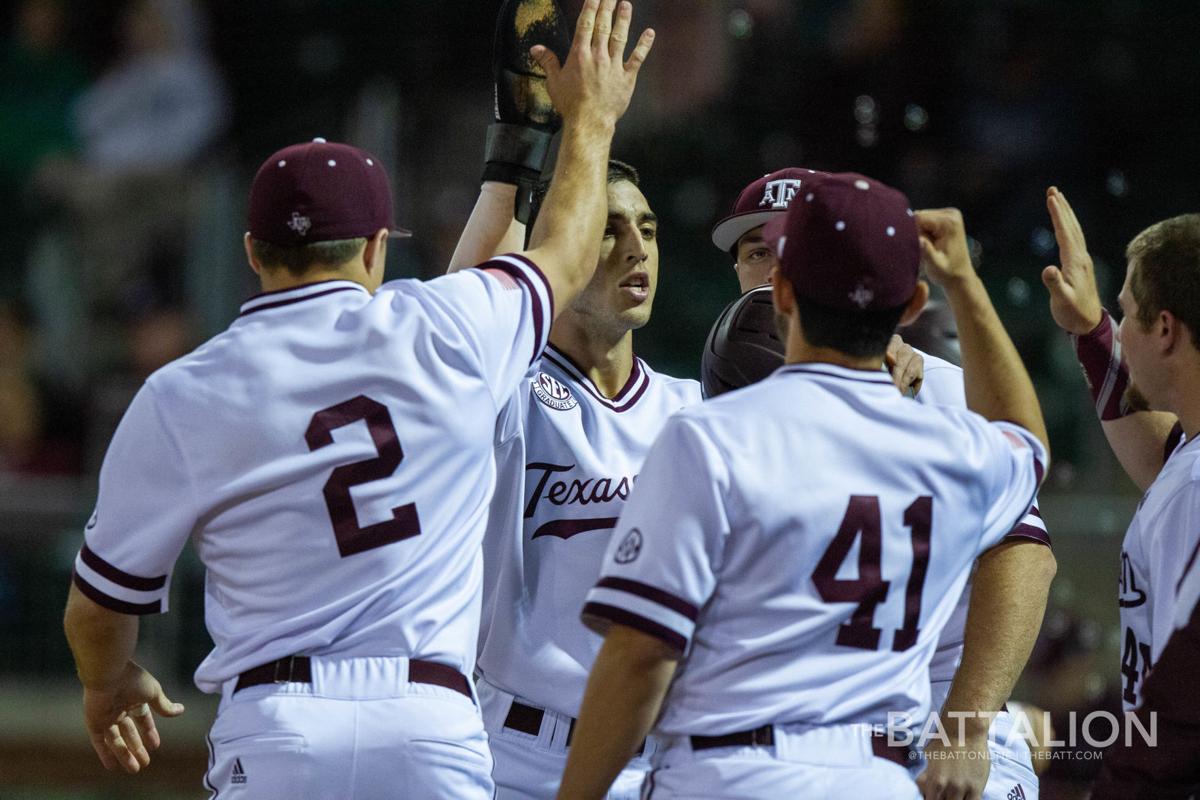 At age 24, center fielder Ray Alejo is one of the oldest and most experienced members of Texas A&M's roster, and A&M coach Rob Childress said he sometimes serves as another coach.

On March 10, 2020, the Texas A&M baseball team was gearing up for SEC play — but first was a midweek game at Rice.

A cool day with the wind pulling to left field at Reckling Park, it was one of those games where players can lose focus on the task at hand and let things slip away. Ahead by just one run going into the bottom of the seventh, A&M senior center fielder Ray Alejo knew he needed to step up.

“We need to lock in right here, let’s win this game, make some plays out here, do what we need to do and get off the field,” Alejo said to sophomore right fielder Logan Britt.

And lock in they did. Alejo batted in two runs and ran to make a catch in left center field as the Aggies held Rice scoreless past the fifth inning to cruise to a 6-2 win. They didn’t know it at the time, but the Tuesday trip to Houston would be their last game of the season, as COVID-19 eliminated spring sports just two days later. Players, especially seniors, were left wondering if they had unknowingly played the last game of their college careers.

For Alejo, who is now 24, the opportunity to return for a fifth season is a blessing that also comes with many lessons.

“I think that’s the biggest thing a lot of guys learned from last year, you never know what’s going to happen tomorrow so you can only control today,” Alejo said. “That could’ve been the last game of my career at that point. I think that’s our goal — focusing on the present and taking care of each game for what it is, knowing there’s no promise of another game.”

Alejo has had a lengthy journey with NCAA baseball to get to his super-duper senior year. Beginning his collegiate career at Ole Miss, Alejo said he did not see a future for himself in Oxford, Miss. He then transferred to UCF and his hometown of Orlando.

After two seasons at UCF, Alejo desired something more.

“I knew after I didn’t get anything in the draft my redshirt junior year I wanted to go back to the SEC and have a victory lap,” Alejo said. “[A&M assistant coach Justin] Seely reached out to me when I put my name in the transfer portal, and since then I’ve been an Aggie and I’ve loved every bit of it.”

Coming into the program as one of the oldest members of A&M’s roster, Alejo quickly became a leader for the team. Now, with a year at A&M under his belt, this role has grown and expanded for Alejo, so much so that A&M head coach Rob Childress said he sometimes serves as another coach.

“Ray is so mature. He’s probably the oldest player I have ever coached in my career,” Childress said. “Ray has so much to offer our program and our players from the standpoint of his journey, his experiences … To be able to take something from a guy that is 24 years old … that has experienced a lot of success and a lot of failure too, it’s a blessing to have Ray with us.”

The combination of Alejo’s age and maturity with his somewhat unorthodox journey seem to account for his attitude and approach to baseball. However, the center fielder’s desire to help others is something that was apparent in him even as a child, his mother Stephane Alejo said.

“He was eight years old at the time. We were actually coming out of a Magic game, and we were just walking down the street,” Stephane said. “All of a sudden Ray turns around and he’s gone. I’m like, ‘Where’d he go?’ I’m freaking out, and he had turned around to give his last two dollars to a homeless man sitting outside of the Orlando Arena. As an 8-year-old, I just thought that was really unexpected. [It’s] just the way he lives his life. He’s a very thoughtful and heartfelt guy.”

It is this caring nature that connects Ray and A&M’s coaching staff. Ray said the attentiveness of the coaches defines the program and translates into success on the field.

“I feel closer to them than I ever have with [another] coach,” Ray said. “They care about who you are as a person, they care about your family. Coach Childress preaches about family. I’ve heard from all of our coaches as I was driving back to College Station [after winter break]  just telling me, ‘Hey, drive safe.’”

Ray said the on- and off-the-field camaraderie contributes to the program’s success.

“It’s always about performing on the field for a lot of people,” Ray said. “I think that comes from the fact that the coaches care so much about the players off the field as they do on the field … being able to have that trust off the field allows for me and everyone else to trust them on the field.”

Since the COVID-19 pandemic, Ray said he has dissolved many of his personal aspirations — such as the MLB draft — in exchange for team-oriented goals.

“I’m more focused on winning [than personal goals],” Ray said. “A lot of older guys will tell you that when you’ve gone through all the bumps and bruises and all the hardships of playing college baseball, you stop focusing on the results and what’s happening with yourself and all you really want to do is win … Last year I knew we were going to go somewhere with it. I have a feeling we’re going to do the same thing this year, and that’s something I want to be a part of.”

As one of the oldest and most experienced members of the team, Ray’s advice to his teammates is often taken to heart. Respect is earned, not given, and Ray has the resume, attitude and experiences to have earned that respect.

“You can see that Ray has their respect,” Childress said. “He doesn’t waste words, he’s not boisterous when it comes to sharing his thoughts and feelings and what he sees with a swing or what we’re trying to do on a certain play or being another coach in the dugout.”

Regardless of his journey — the homeruns, the strikeouts, the victories and the beanballs — Ray is a complete teammate. He said his goal for the season is to contribute as much as he can to the team, with his eyes set on Omaha. But what Ray offers to his team, more than anything, is wisdom and a kind heart.

“To have to pack your bags up and move programs, it’s awful hard and it can be traumatic,” Childress said. “You start to get a close network of friends, you start to get into a comfort zone with your game. And to have to pick up and leave, there is certainly a pride factor involved. You would think that a guy that has made all these stops would have a little bitterness in his heart, but it’s the exact opposite with Ray. He has such a caring heart. He wants to share and wants to impact … He’s special to be around.”