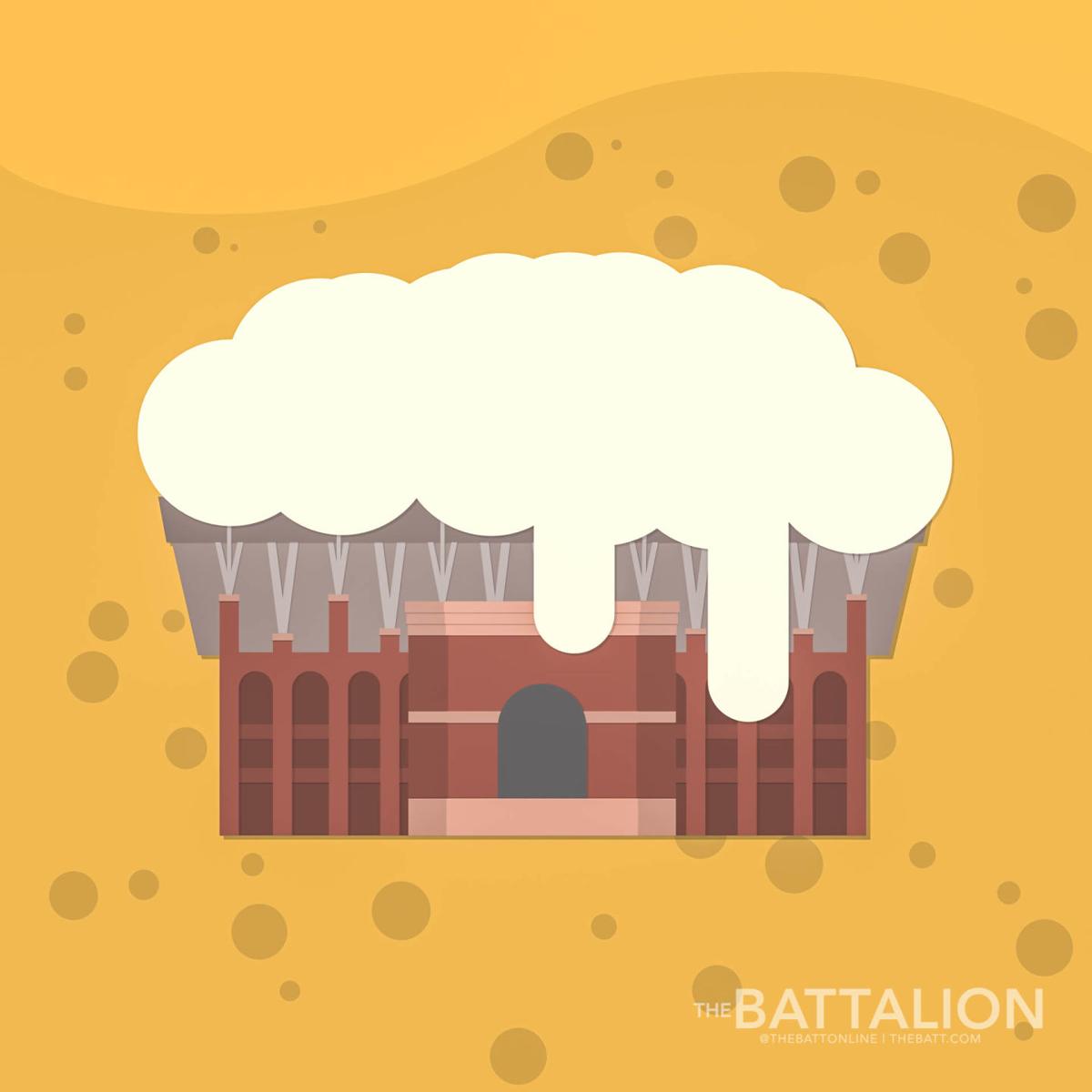 Alcohol will be sold in Kyle Field this season as the Southeastern Conference approved the sale of beer and wine in public seating areas in May, but don’t expect to purchase any on the upper east side of the stadium.

There will be no alcohol sold in concessions on the 350 level on the east side of Kyle Field, which services the student section second deck. Students 21 and older with a valid ID can still purchase alcoholic beverages, including draft beer and wine, at other concessions and take them back to their seat in designated student sections.

“We’ve taken every possible step to ensure the safety of our fans while providing the greatest atmosphere in all of college football,” Texas A&M athletic director Ross Bjork said in a statement. “We are excited about the upcoming season and want everyone to have a safe, enjoyable game day experience.”

The SEC lifted an alcohol ban in public areas of stadiums at the annual Spring Meetings in Destin, Florida on May 31. On June 13, A&M was the first conference member to announce the sale of beer and wine in its stadium, beginning this fall. All sales will be at stationary stands and no more than two alcoholic beverages can be purchased at once. Sales will conclude at the end of the third quarter, in compliance with SEC rules.

There will be eight modular draft bars on the first deck concourse, upper deck concourse and second deck concourse in the south endzone serving draft beer in 16 and 22 oz. cups. Packaged domestic, import, premium and craft beer offerings — in 16, 19, 24 and 25 oz. — as well as draft wine, will be available in 30 locations on the same stadium levels. Prices range from $9 to $13 based on size, brand and souvenir cup.

“We were the only conference in America that had this type of policy that prohibited universities making their own decisions related to selling beer, wine, alcohol, etc.,” Bjork said in a phone interview with The Battalion earlier this summer. “I always believed in local flexibilities. I’m glad the SEC passed it. Glad we made that decision. I think it just provides fan experience opportunities for people who want that type of refreshment.”

Rolling out the new policy is one of Bjork’s top priorities in his first year leading the A&M athletics department, and he said safety is of utmost importance.

“We know people are going to drink; We know people are probably going to binge-drink before the game,” Bjork said. “We can help eliminate that by having the psychological effect of ‘Hey, I can get a beer when I walk in the game. I don’t have to take this six-pack and drink it before the game. I can pace myself.’ We know those studies are out there to help eliminate a lot of the issues.”

In an expanded release outlining the new policies Friday, the A&M athletics department emphasized that Texas laws governing alcohol consumption, in regards to minors, will be enforced at Kyle Field, stating "provision of alcohol to minors is a Class A misdemeanor and will be enforced to the fullest extent of the law, with video and other evidence available inside the stadium.”

A&M has taken multiple measures in order to prevent underage drinking. There will be an increase of security at Kyle Field and the stadium’s hospitality team is taking State of Texas Alcohol Responsibility Training to help staff recognize fake IDs and over-intoxication.

“We need to make it safe,” Bjork said. “We need to educate. We need to make sure we have all of the right parameters set up, and I know that the plan has been evolving since the vote has happened, so the folks at A&M have been working on this for some time and I think we’ll have a good plan to put in place. I like it. I think it provides flexibility we wanted, but we have to do it the right way.”

Other league schools Arkansas, LSU, Missouri, Tennessee and Vanderbilt are the only other SEC members to announce the sale of alcohol in public areas at football games this fall.

Administrators from Alabama, Auburn, Georgia, Mississippi State, Ole Miss and South Carolina have said alcohol sales will not begin this fall at football games. Officials from Florida and Kentucky have yet to release their plans to sell alcohol or not.

“The 12th Man is the most powerful, wonderful fan base in all of football,” A&M president Michael Young said in a statement. “Enjoy the game. If you see behavior that is unruly, be it potentially alcohol-related or not, don’t hesitate to text your concerns to 844-724-1212; or, in an emergency, dial 9-1-1.”