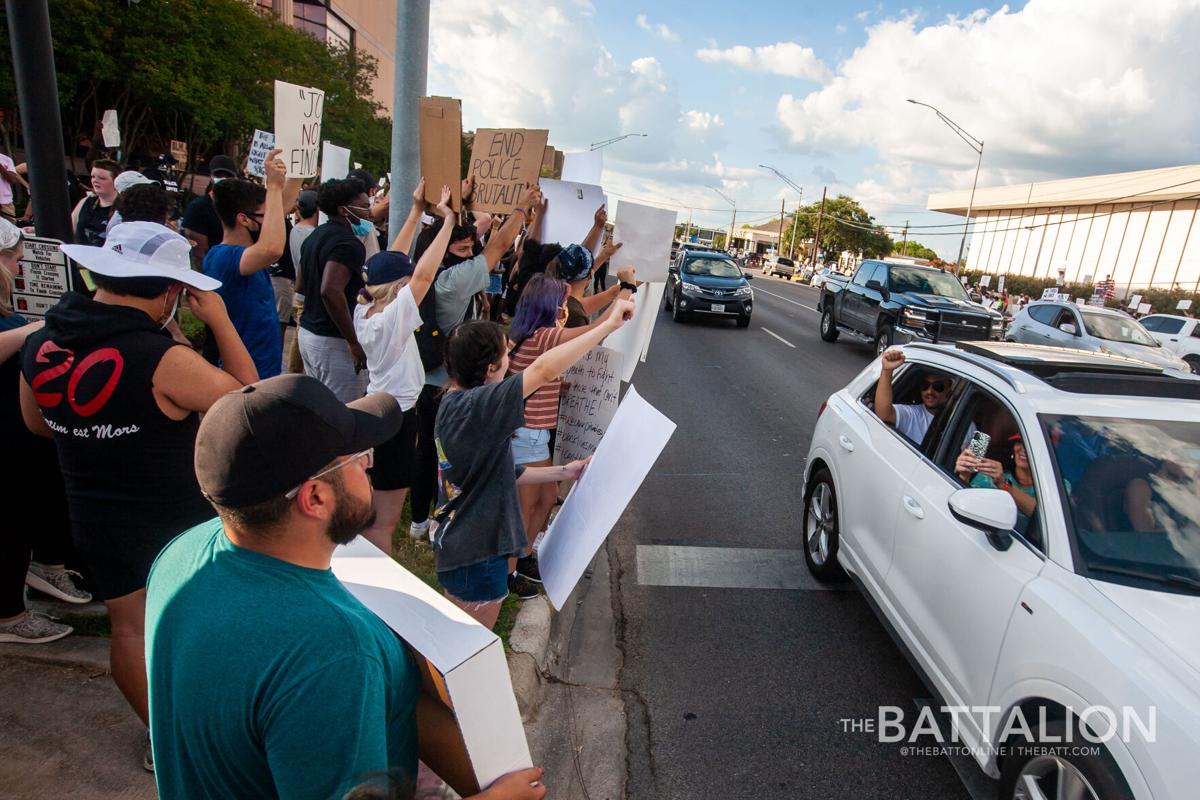 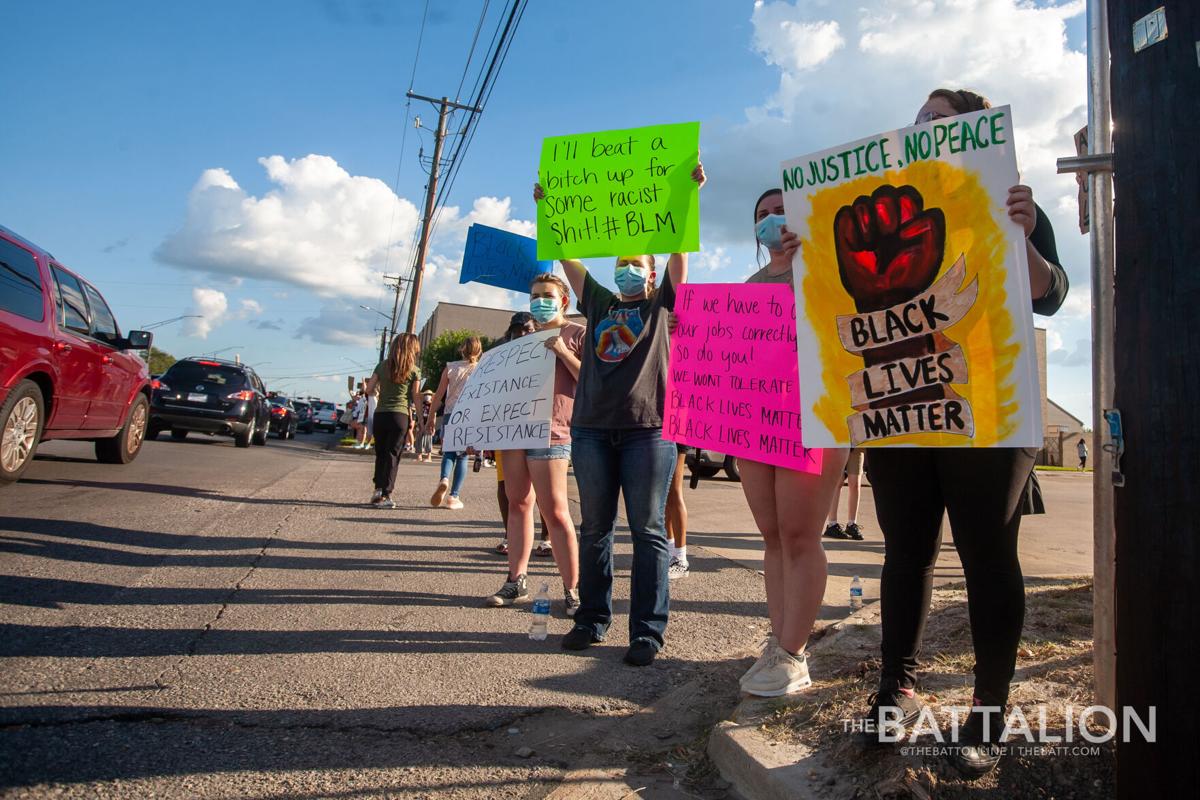 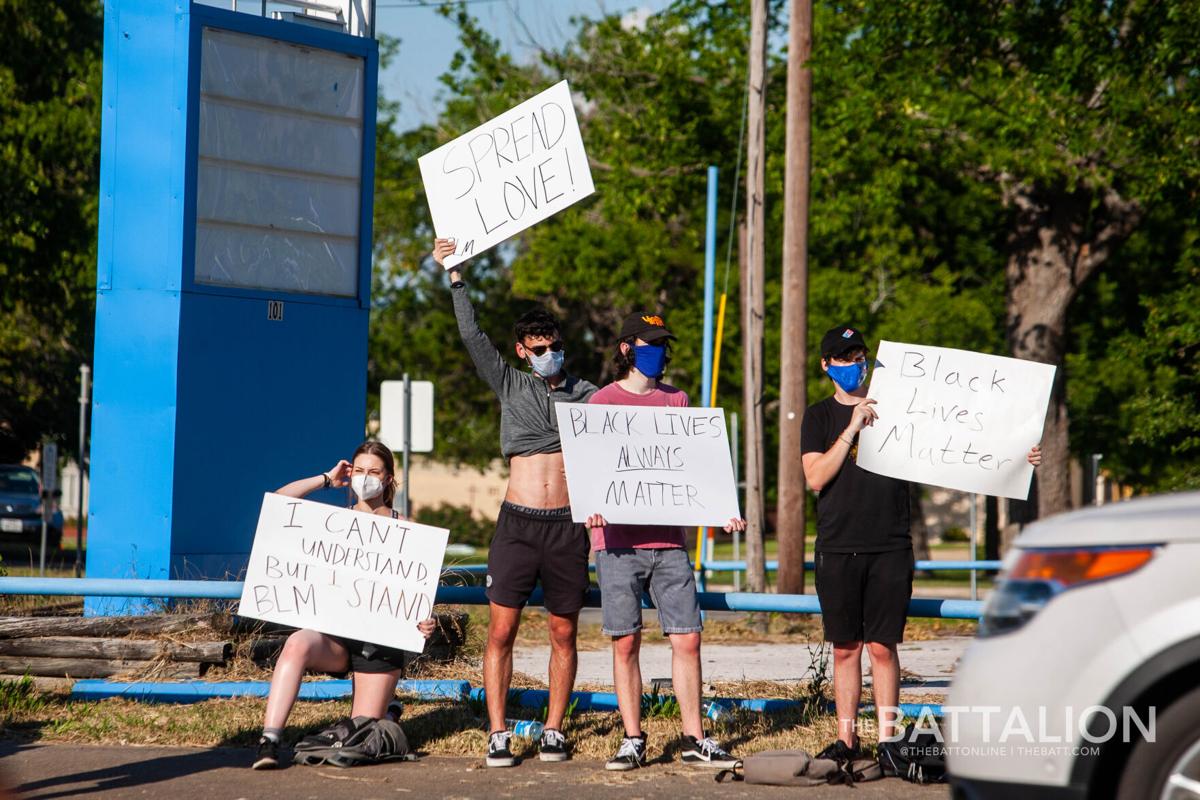 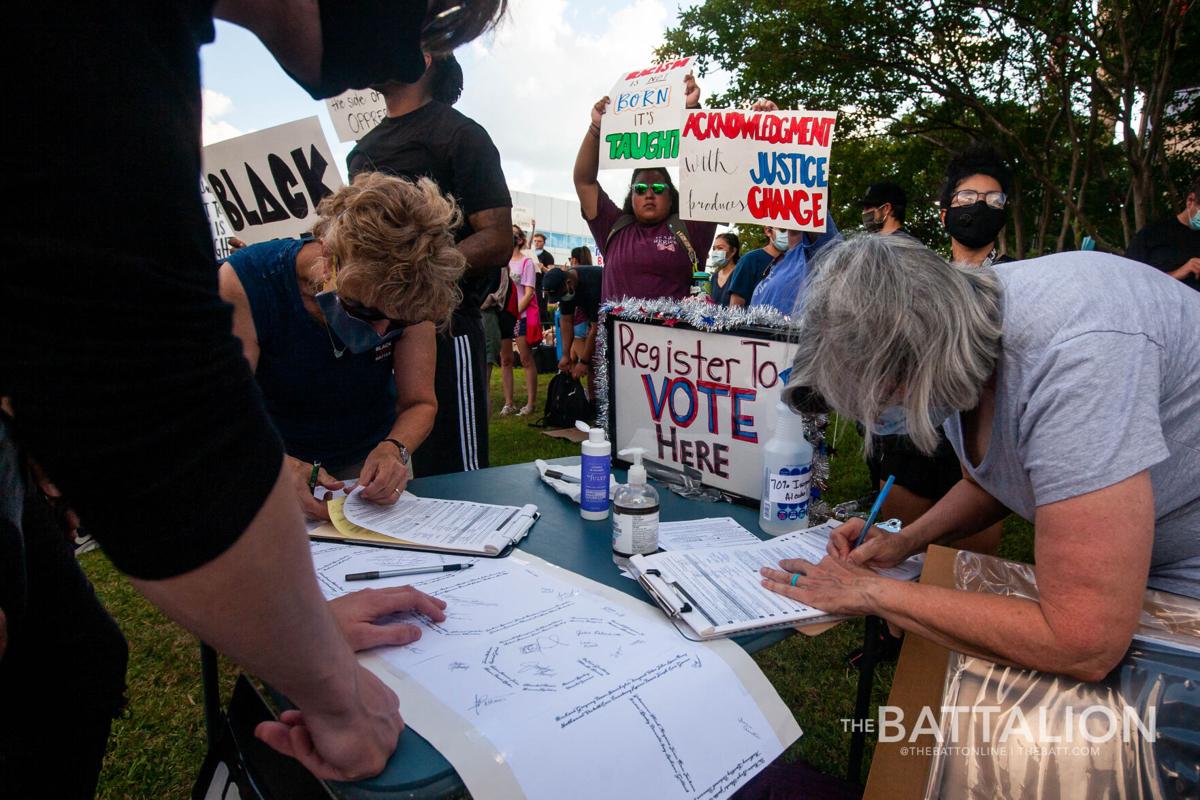 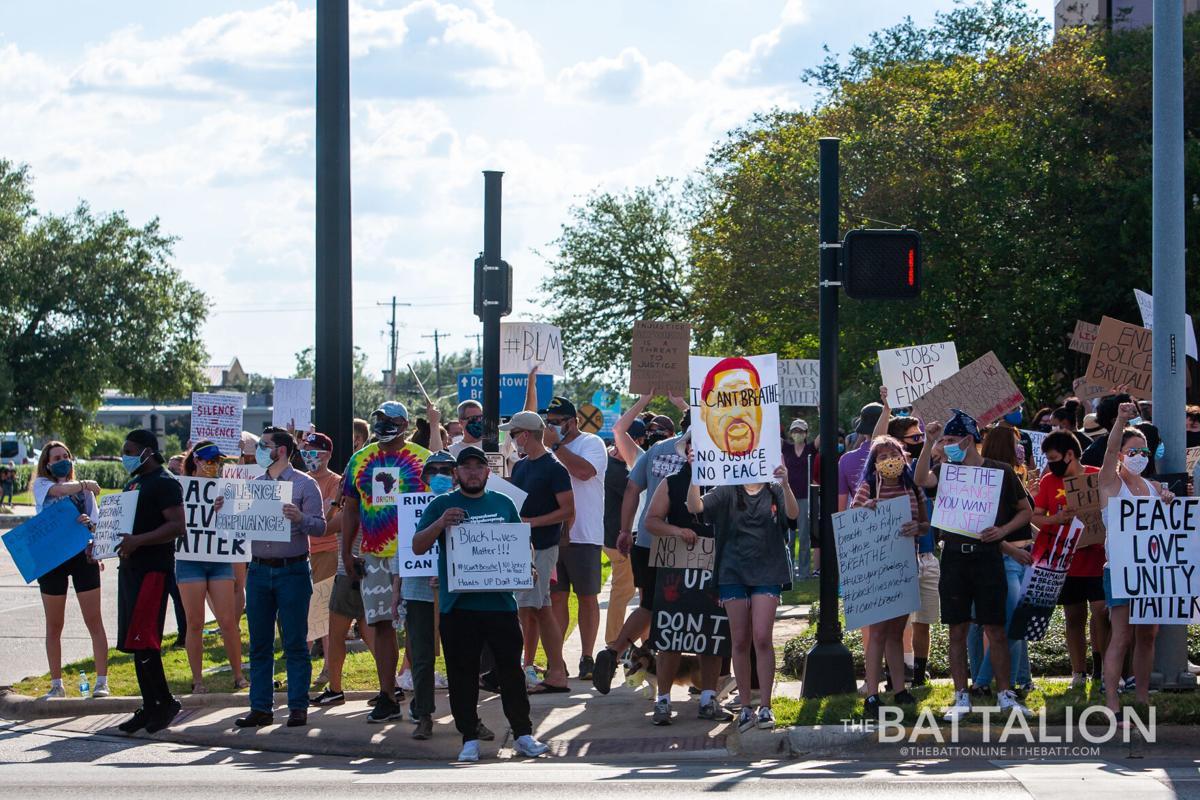 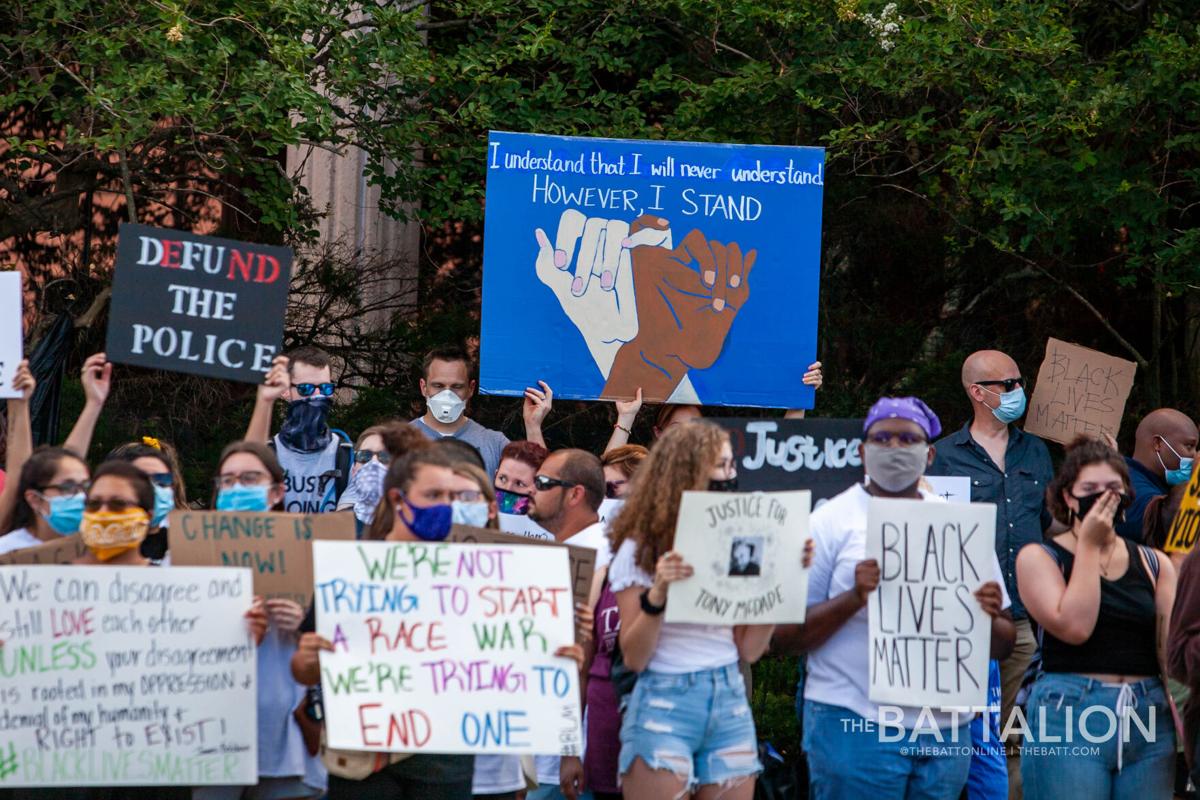 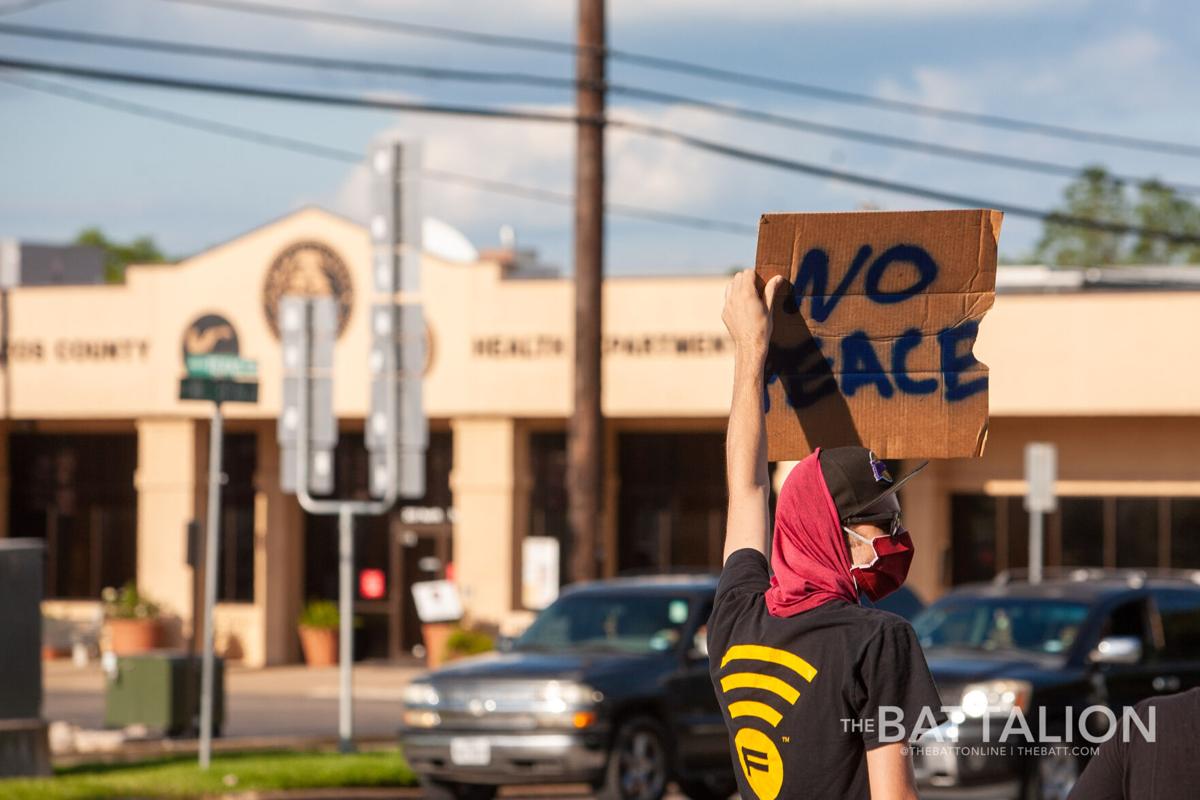 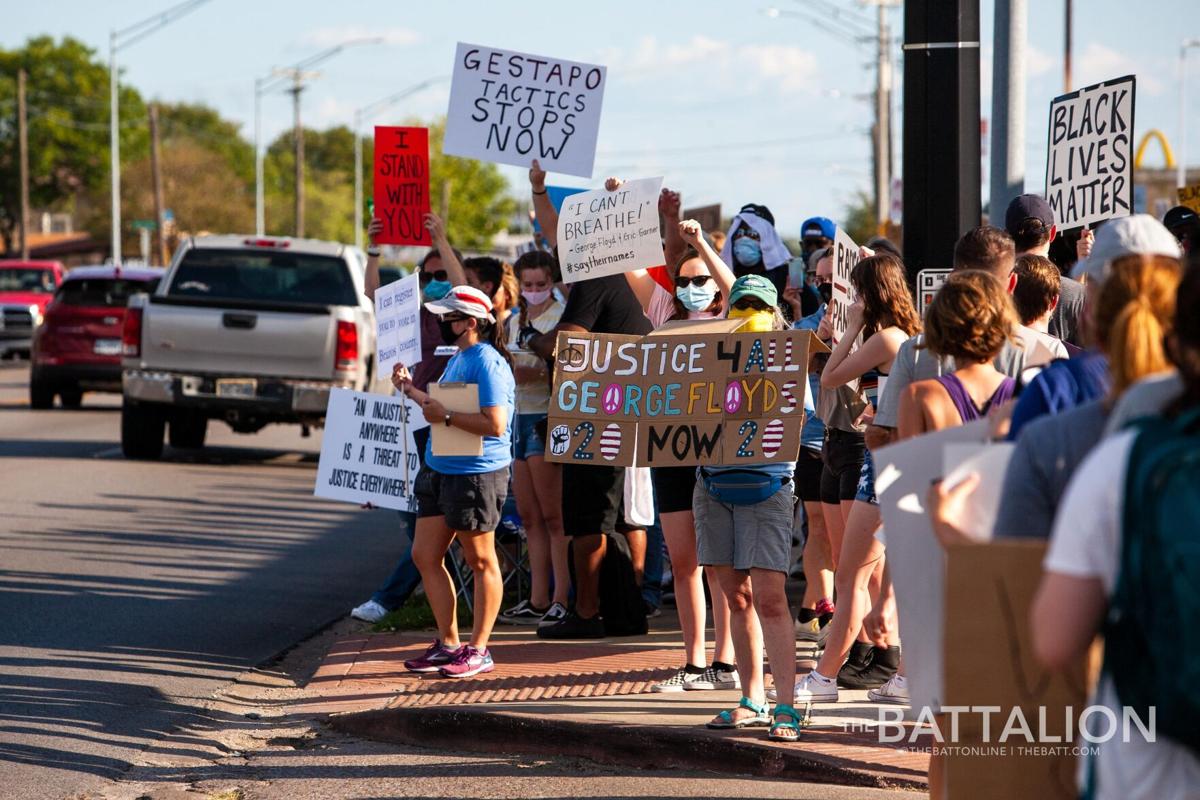 While a concentration of the protesters was at the corners of the intersection, many others lined Texas Avenue for blocks holding signs and exercising their right to protest. According to several protesters, this is the largest protest to date in Bryan-College Station following the fatal arrest of George Floyd. Volunteer voter registrars were also present at the protest, encouraging the protesters to make a difference in upcoming elections as well.

Construction science senior Boone McLaughlin said he attended the protests that took place in College Station on Texas Avenue and George Bush Drive with his friends — members of the A&M track team.

“For Bryan-College Station, this is huge, this is more than I expected,” McLaughlin said. “It’s encouraging. As my aunt and uncle and I were discussing earlier, it’s really nice to see some people coming around asking people to register to vote.”

Volunteer registrar Kristin Harper said she commonly visits large gatherings to urge people to register to vote if they have not already.

“I think that voting is a good way to influence change,” Harper said. “This is one of the things I do a lot in places I go.”

McLaughlin said while the protests do allow people to have their voices heard, further steps need to be taken to ensure change in the community and government.

“This is great,” James said. “It’s getting their voices heard. It’s that change. We need change, America needs change, local government needs change and this is a start. Get out here, let’s get the momentum for the change.”

Incoming Blinn nursing freshman Alondra Beiza said she is glad to see the increase in turnout, but she hopes it continues to grow. She also expressed some of her family’s concerns that inspired her to attend the protest.

“My parents are Hispanic and I’m here mainly because of them,” Beiza said. “We always talk about the stuff that goes around, not only to our people, but to people of color around us in general. They’re really passionate about it, but we’re scared, they’re scared because they’re not from here. We just want to support in case anything happens, so others will support us.”

Protester Alexys Harris has attended all of the protests in Bryan-College Station since the first on May 29. She said the unity and diversity among the protesters was touching.

“The number of people that are here, the diversity that’s here as well, just seeing people unified as one,” Harris said. “It feels so amazing just to see that black people are not in this alone, that we have other people, other races that are coming together and standing up and uniting with us.”

Editor's Note: This story has been edited to correct AP Style errors in multiple areas.