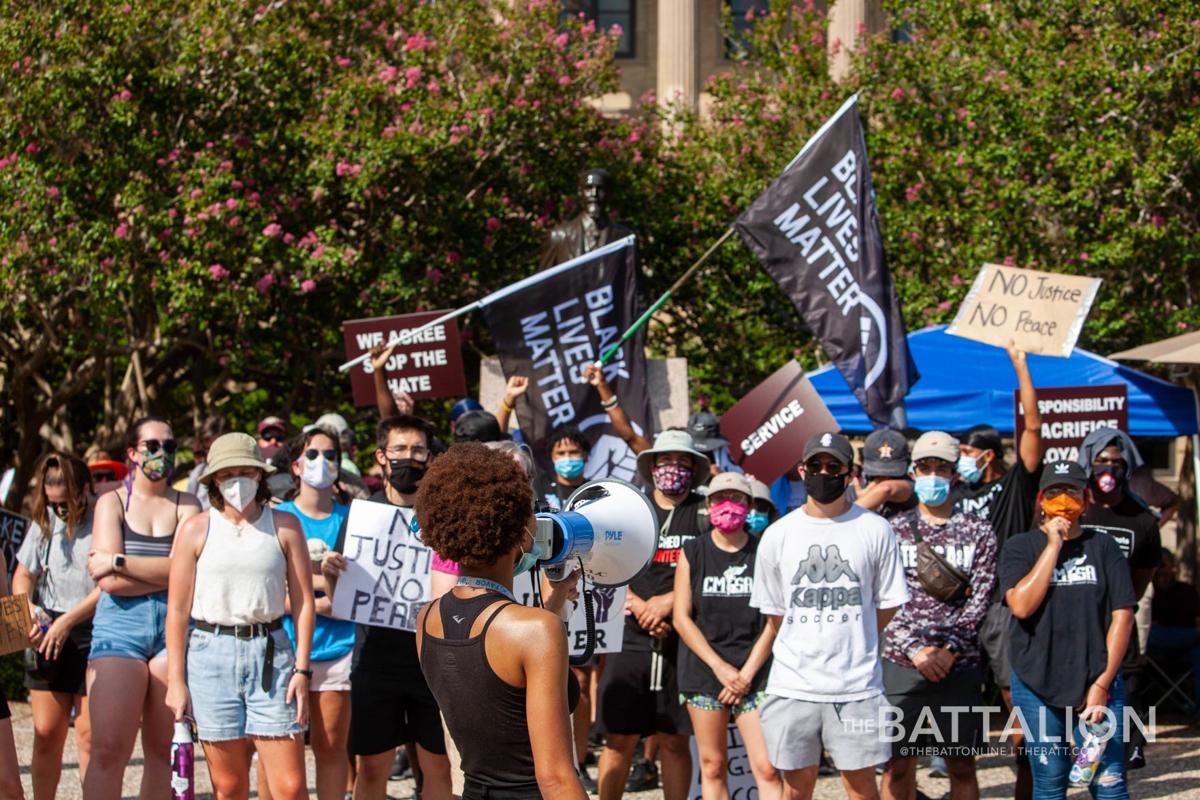 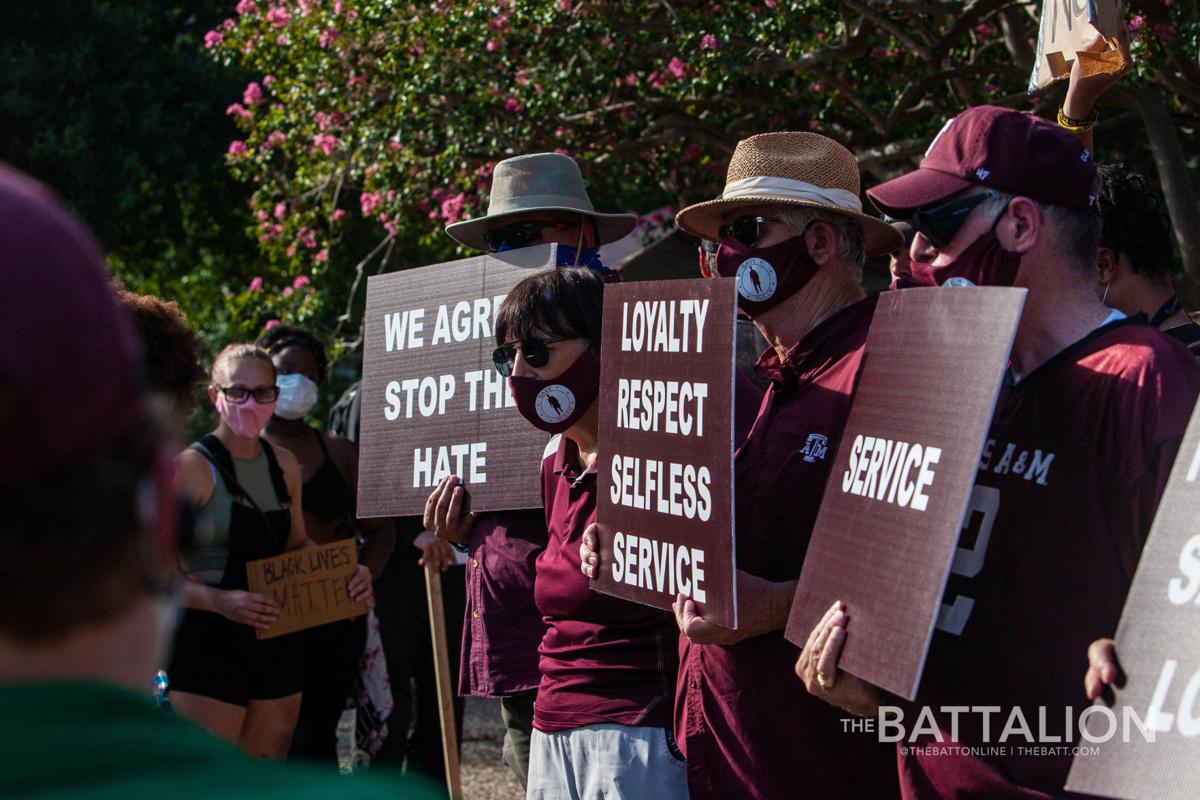 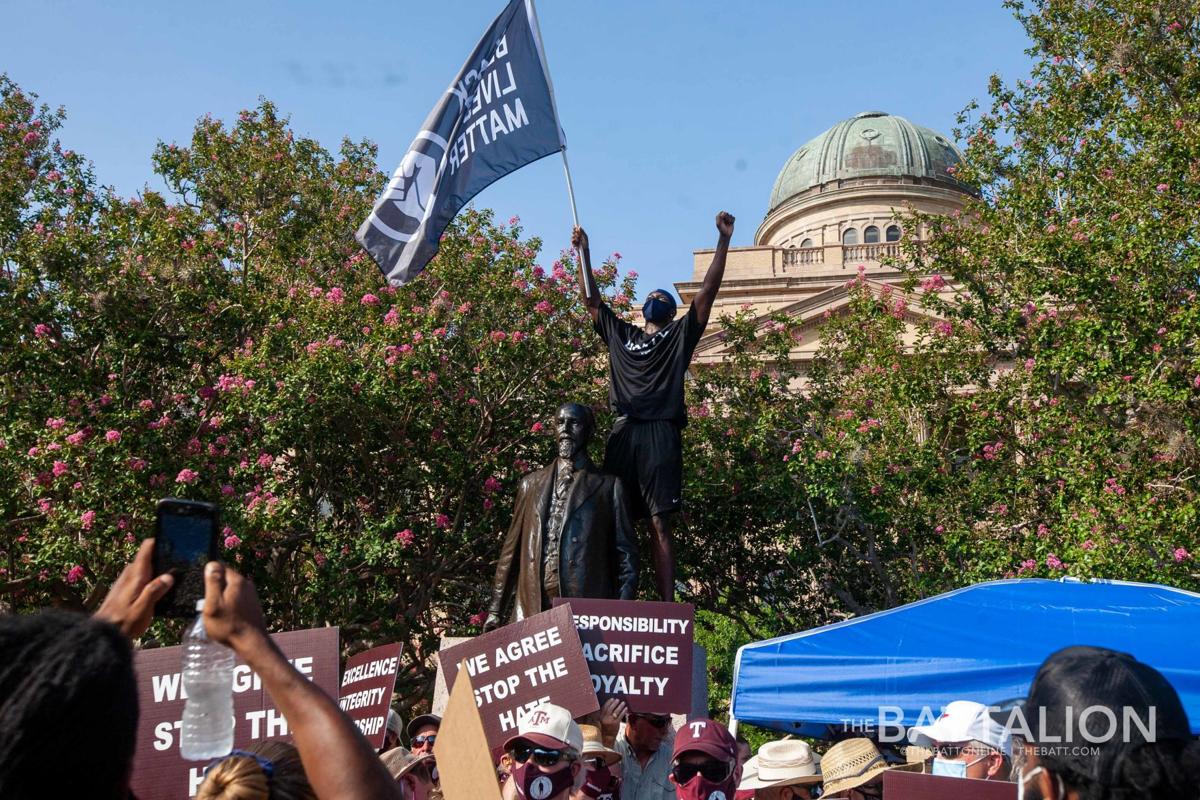 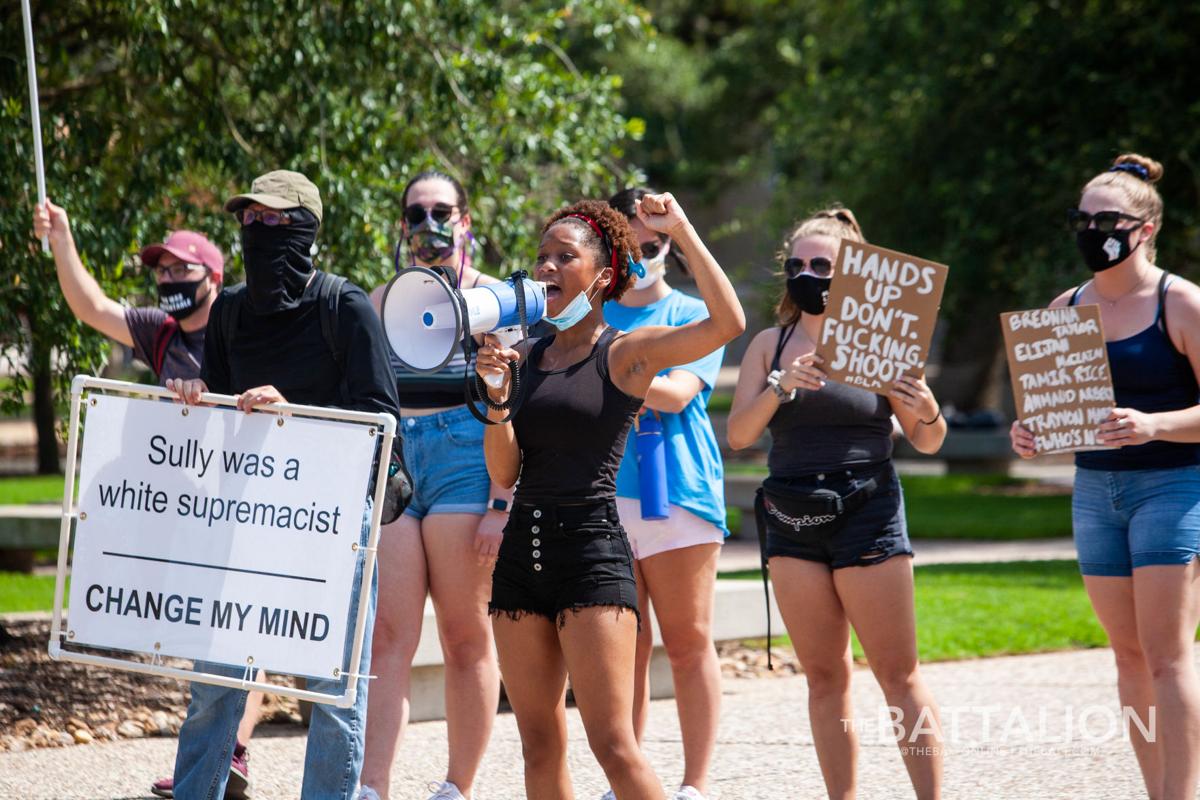 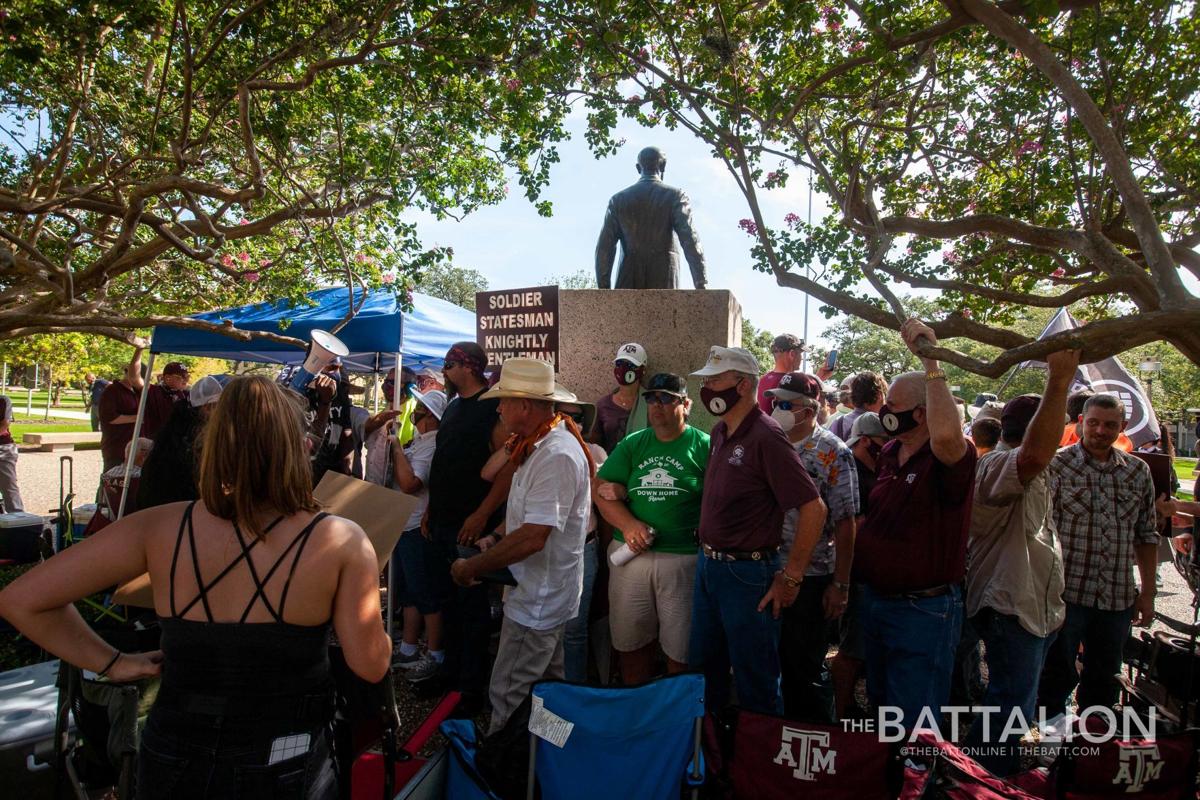 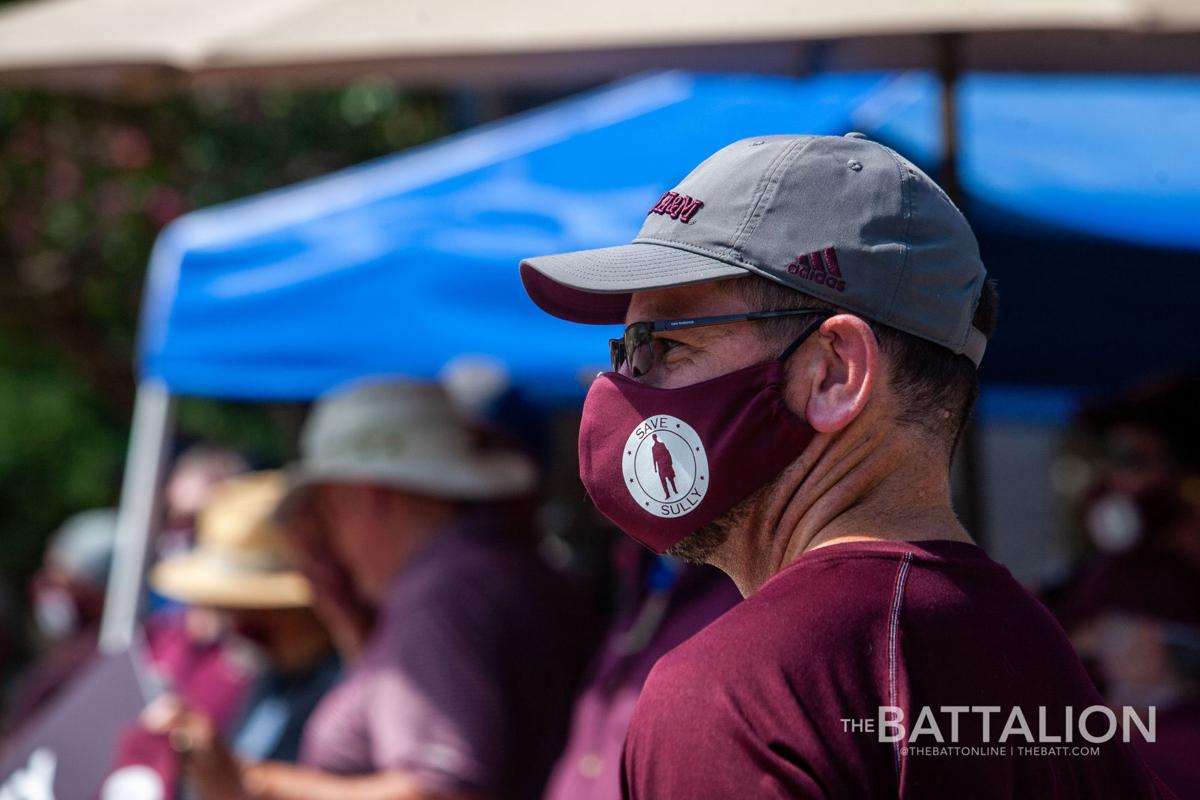 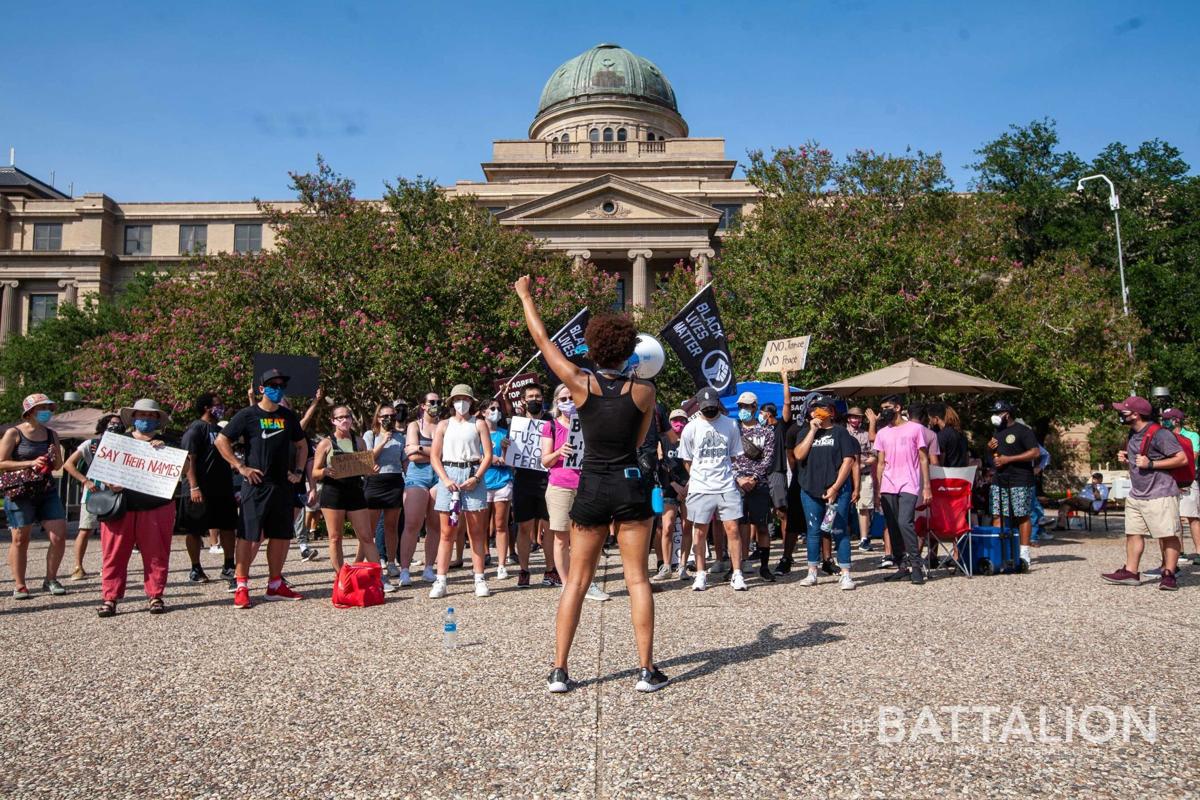 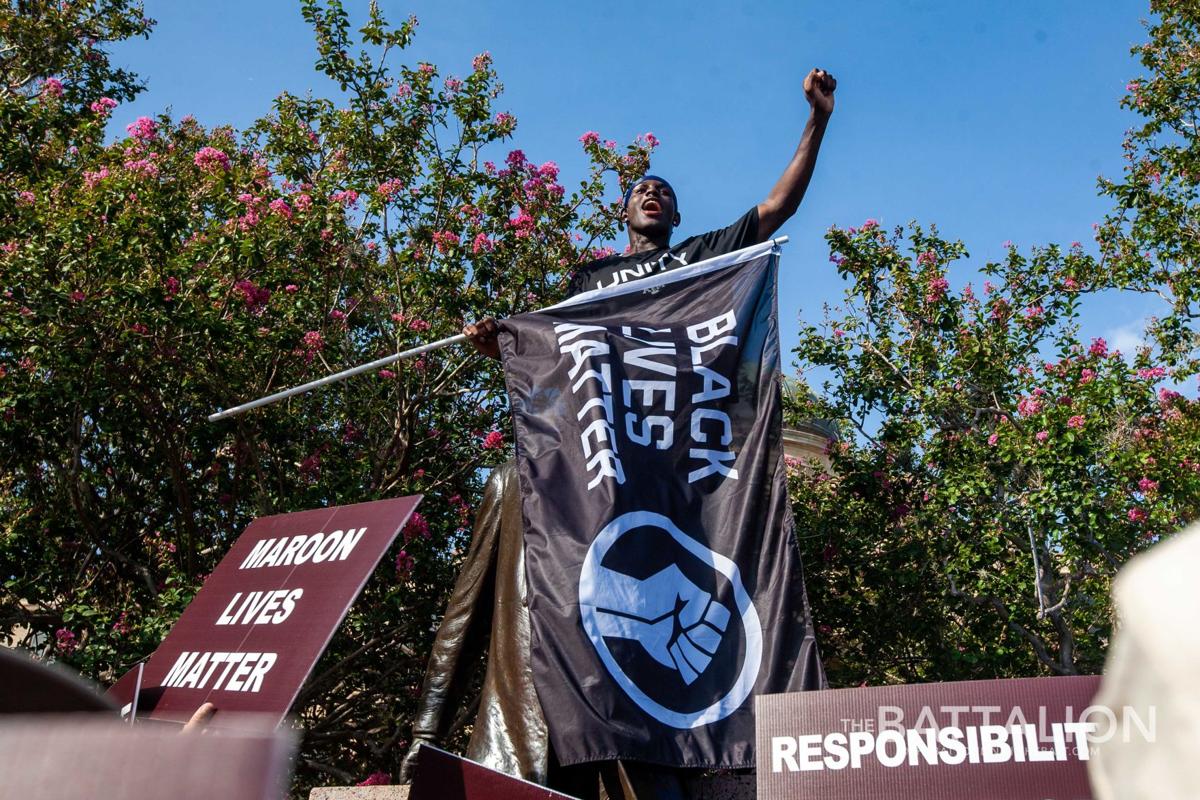 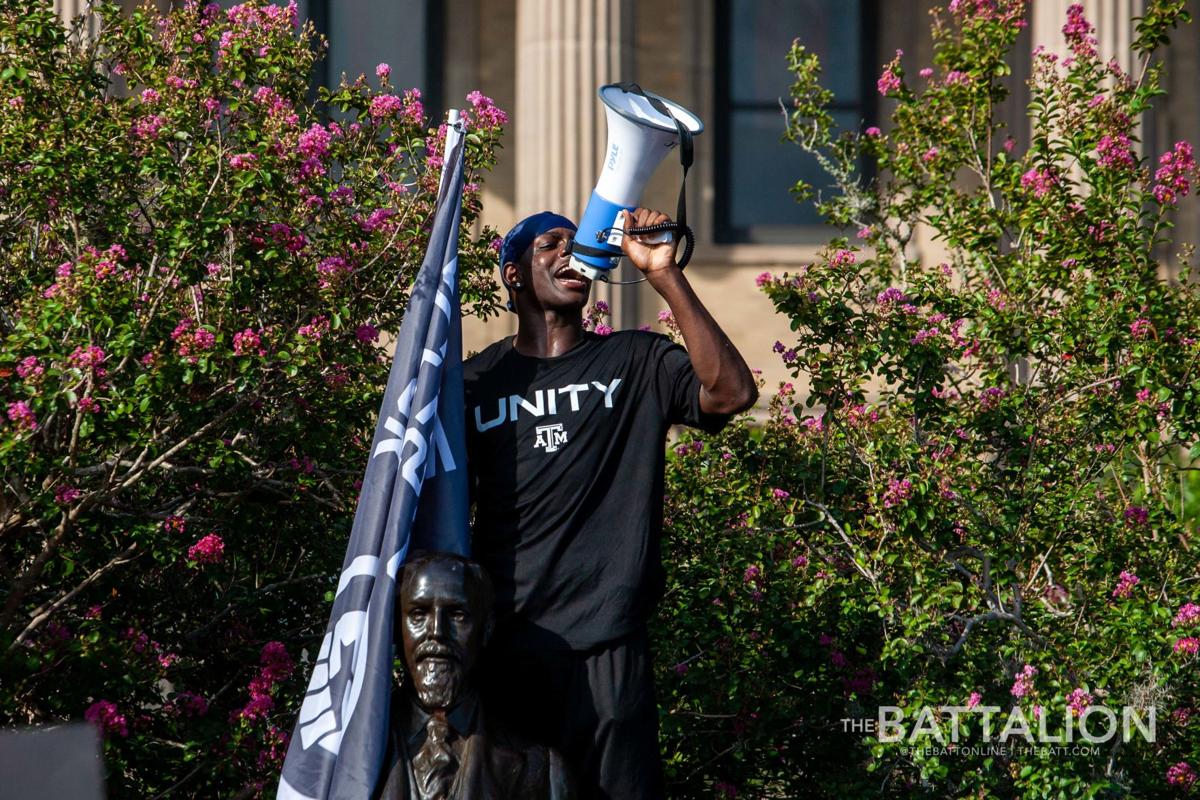 Pro-Sully and anti-Sully protesters gathered in Academic Plaza on July 12 to voice their concerns and opinions regarding the Lawrence Sullivan Ross statue.

When the protest began at 4 p.m., pro-Sully protesters were surrounding the statue holding signs and soon began singing the national anthem and The Spirit of Aggieland. After this, the anti-Sully protesters walked closer to the opposing group with their own signs and Black Lives Matter flags. During this time, the two sides spoke to each other, often raising their voices.

The anti-Sully side asked many questions to the opposing side and the pro-Sully side began to sing The Spirit of Aggieland once again. The group of anti-Sully protesters then circled the statue and the two crowds merged.

In a statement sent to The Battalion before the protest, political science senior and organizer of the protest Qynetta Caston commented on the fact that A&M has not officially released any future plans for the statue.

“Their silence speaks volumes about how much they truly care for their Black Aggies,” Caston said. “Texas A&M needs to remove Sullivan Ross, the 'Negro Killer,' who fought battles to maintain a system that oppressed my ancestors and murdered Native Americans. The purpose of this protest is to shed light on the racial injustices that take place on Texas A&M’s campus.”

Douglass Huebner, Class of 1970, said he and many others think very highly of Sully and his history of service to Texas.

“For the people that know Sully’s history, read his biography and all the things he did, there’s no question [that] he’s one of the greatest Texans that ever lived,” Huebner said. “He was the youngest captain of the Texas Rangers, he fought the Comanches when they raided.”

Austin Warren, biomedical sciences senior and member of the A&M men’s track team, said the pro-Sully argument of others trying to erase history is contradictory because the signs they carry portray Sully as a gentleman and an innovator, when he actually fought for the Confederacy and was called the "negro killer" by newspapers in the 1800s.

“For me, as an African American gentleman who is also an Aggie, I feel oppressed every day I see this man, and see him worshiped,” Warren said. “It’s amazing to me how there’s so many people protecting the statue, but don’t care about the current African American Aggies or people of color that are going to this school and are feeling oppressed by this statue every single day.”

Infinite Tucker, university studies senior and member of the A&M track team, said people need to look at the whole of Sully actions, not only the ones that positively affected the university.

“The tradition of people laying pennies at his feet has been a long tradition at A&M for some time now,” Tucker said. “We Aggies cherish this man without realizing who he was and what he stood for. While some people feel it is good luck to lay pennies at his feet, others, people of color and people like myself, walk around this statue [and] it reminds us of our ancestors and what this man has done to them.”

Attendee on the pro-Sully side, Becky Clark, said she is not a former student at A&M, but has been visiting many Confederate statues around Texas.

“When we obliterate our history, we forget where we came from and what our struggles were, and those are the most important things to remember,” Clark said. “It’s not where we are right now, it’s where we came from, that’s what those statues represent. We’ve come 200 or more years since most of them were put in place.”

During the protest, Tucker pushed pennies off the pedestal on which Sully stands. He then climbed atop the pedestal and said pushing pennies off the statue was his way of making a statement, and that he will continue to push for more diverse representation at the university.

“I am protesting today, because I want a more inclusive and a more accepting university,” Tucker said. “Texas A&M needs more diversity. The president has made statements regarding change, but while a racist Confederate general is still idolized on campus, I will not feel inclusion. I am protesting for the people who come after me, and the people soon to be Aggies.”

Tucker ended his speech while atop the statue, addressing protesters on both sides.

“I’m proud to be an Aggie, but I’m more proud to be Black, and I can be both,” Tucker said.