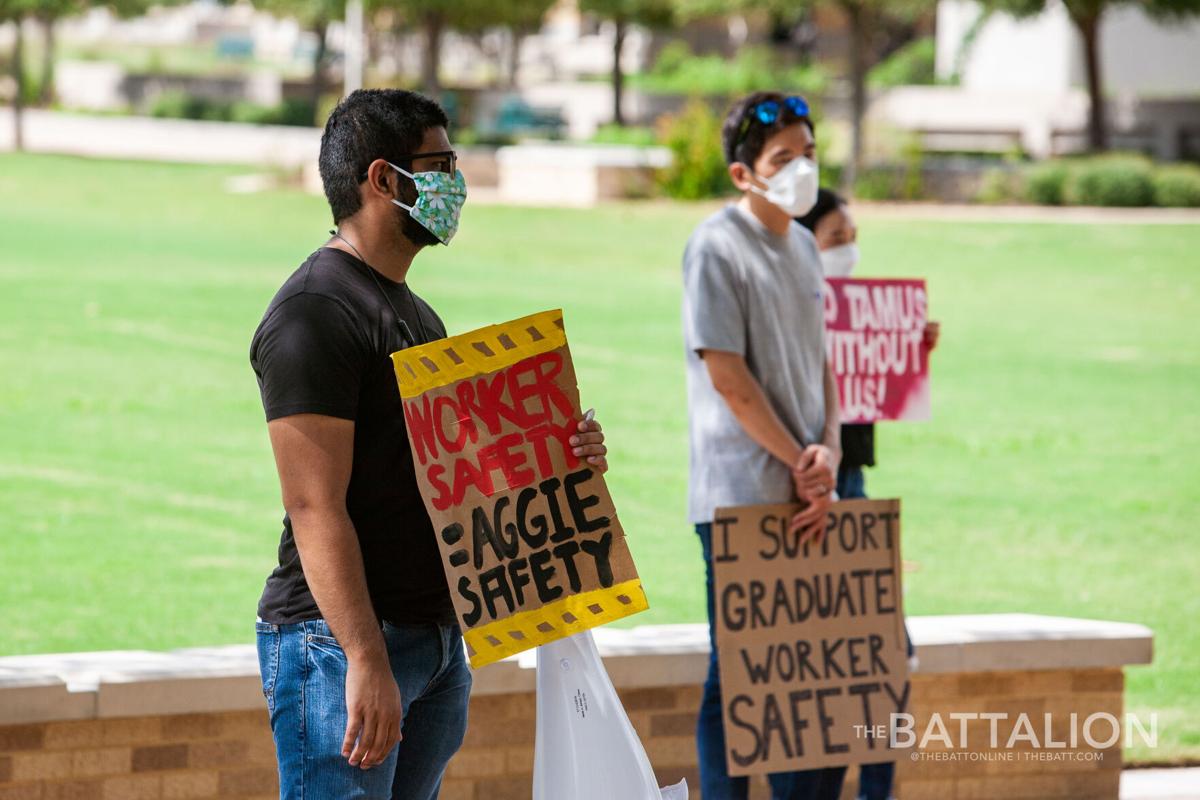 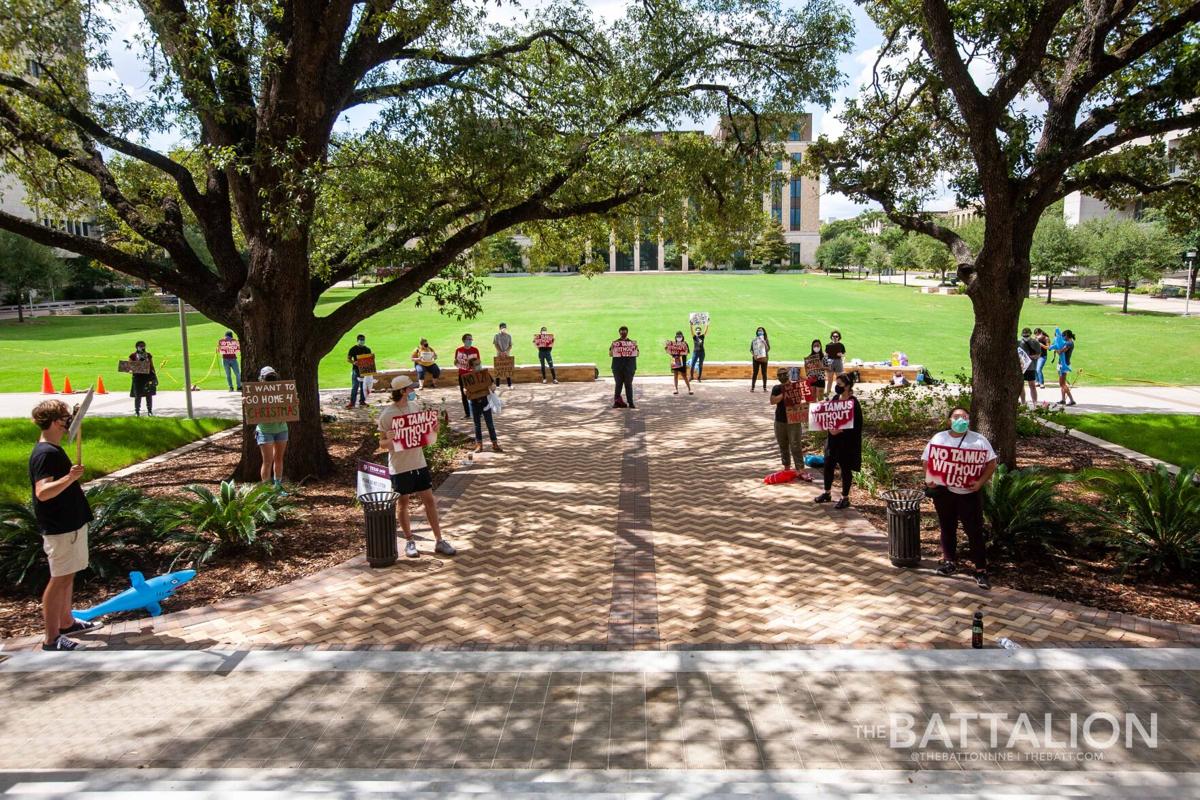 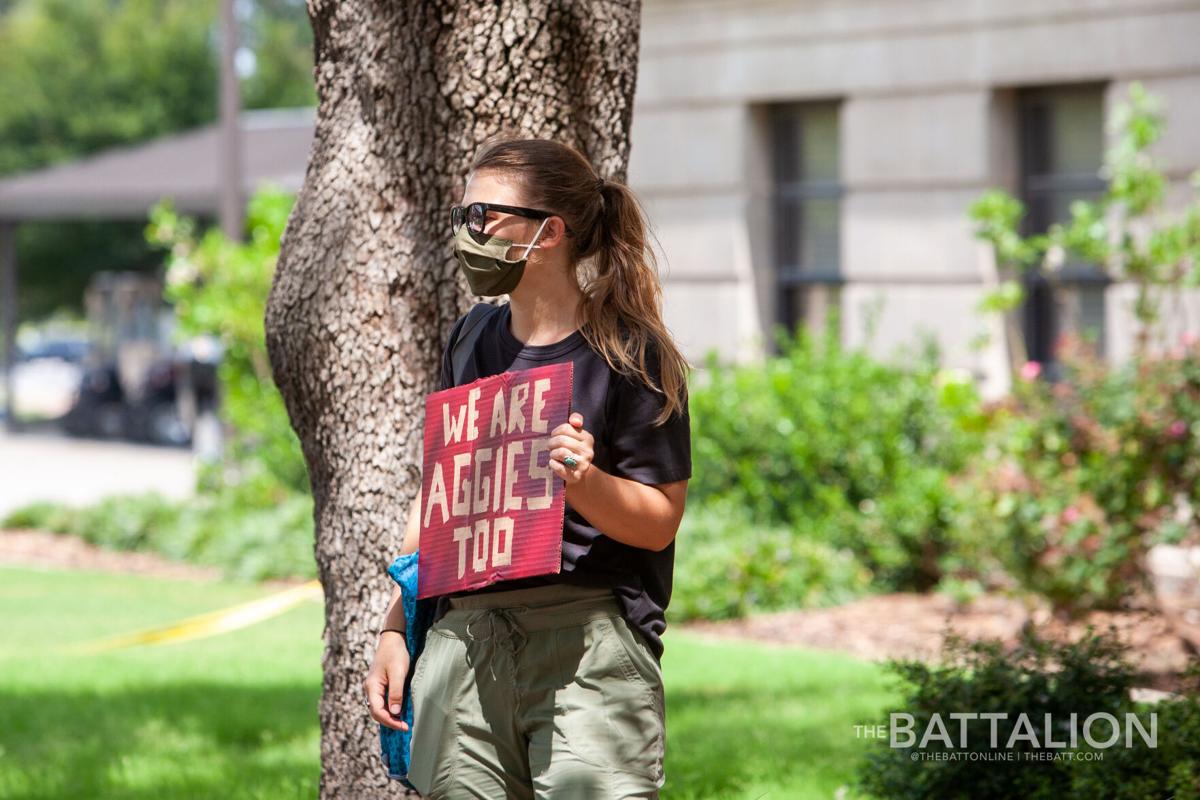 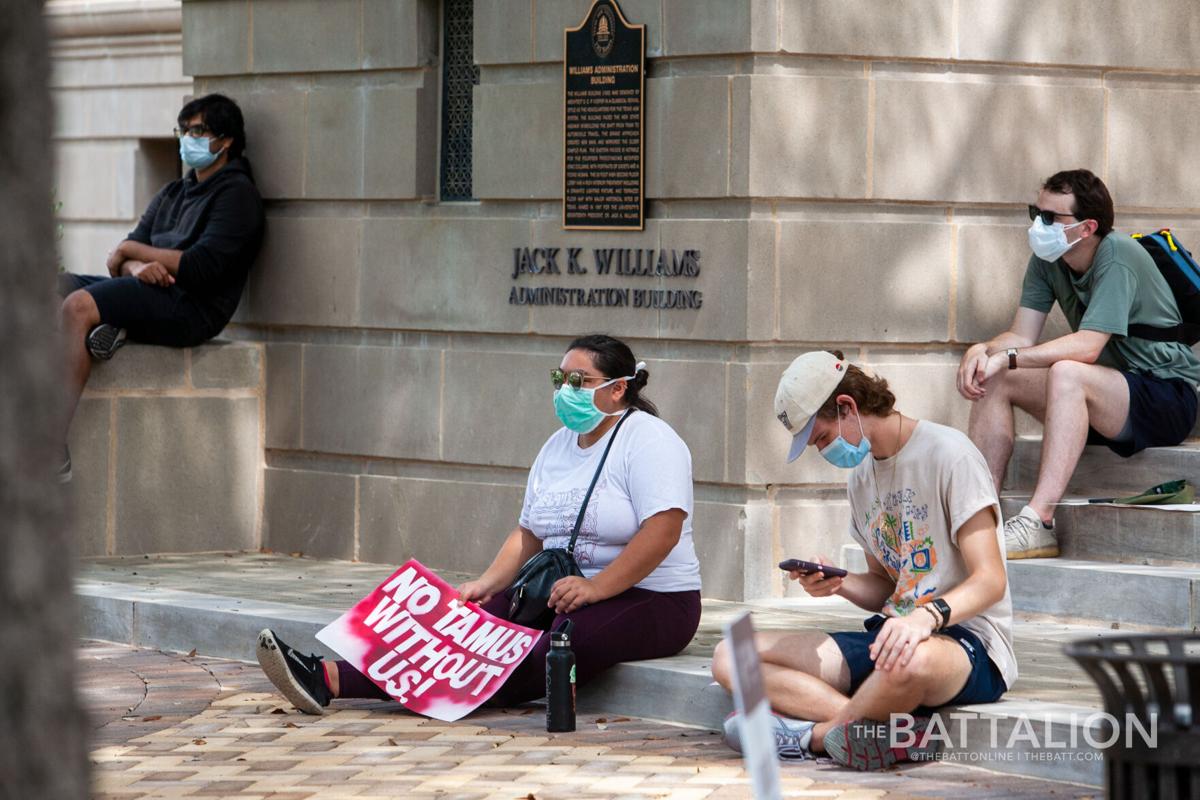 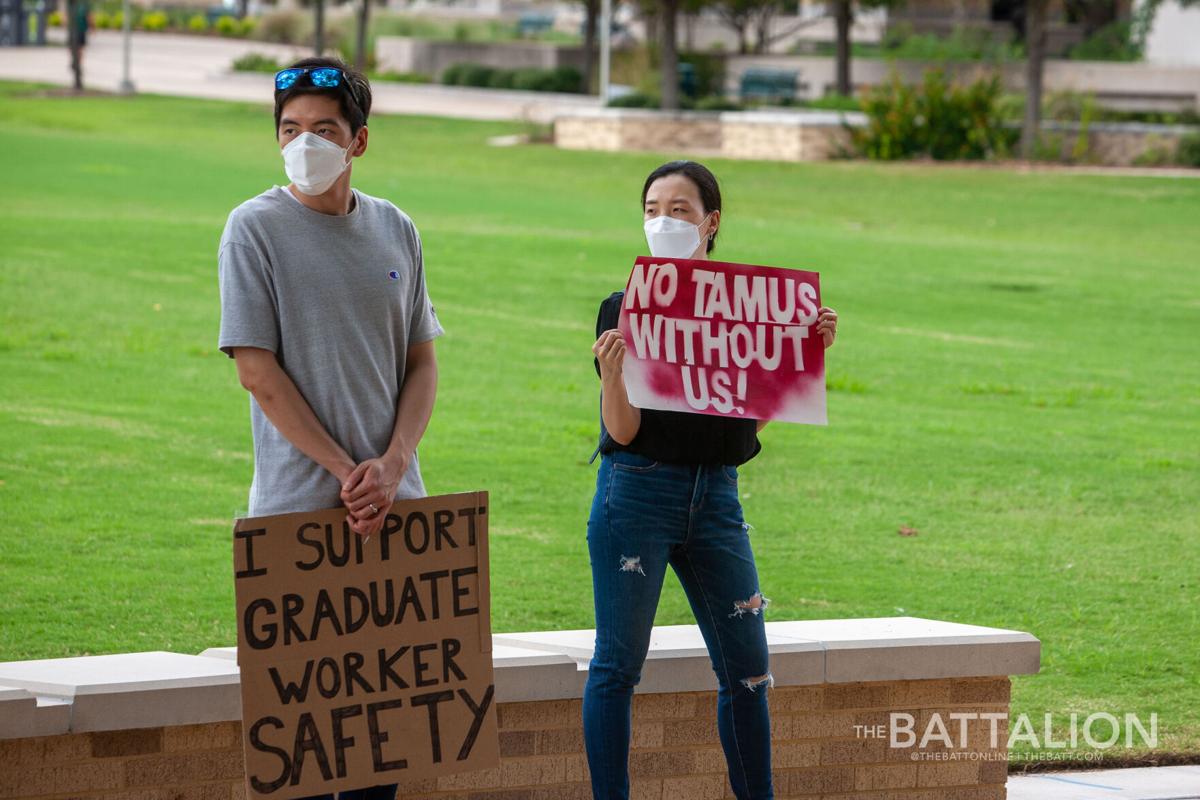 Texas A&M graduate student workers gathered on the steps of the Administration Building at 10 a.m. on Sept. 14 to protest for better working conditions during the COVID-19 pandemic.

This protest comes after Grad Aggies for Worker Safety, or GAWS, sent an open letter on Aug. 14 to university officials with a list of six demands for the protection and compensation of graduate student workers on campus.

“The University’s plan to return to in-person teaching will place its workers in immense danger,” the letter read. “This is of particular concern for graduate teachers, who teach a large number of core classes and, as a result, come into contact with a significant amount of the student body.”

Graduate student workers arrived at the Administration Building to protest for worker safety around 10 a.m. today.I’m told many of them are being forced to teach in person or risk termination for what would be considered striking. @TheBattOnline pic.twitter.com/hmZJcT6wIF

Graduate assistant lecturer, Ph.D. candidate in English and media spokesperson for GAWS Desirae Embree said the administration responded to their letter on Aug. 19 re-emphasising that the university does not intend to do anything more to accommodate graduate student workers than what they have already done.

Additionally, A&M Provost Carol A. Fierke said in a statement on Aug. 14 that graduate student workers have received the same accommodations in regards to COVID-19 precautions that are afforded to full-time faculty members.

“We believe that face-to-face classes are important for providing the best educational experience for many students,” Fierke said. “The university has made an enormous number of alterations to enhance the safety of in-person instruction, including mandating face coverings, social distancing and enhanced ventilation, and there is no evidence of disease transmission occurring in the classroom.”

However, Embree said the fact that the university has reported over 1,000 cases on campus in the first of month classes underscores that graduate student workers’ concerns are valid.

“An absence of evidence does not mean that it isn't happening," Embree said. "They've been saying that the majority of cases are of people in the same households or friend groups, but those are situations that are easily traceable. Classrooms are not the same kind of situation."

The @GAWS_atTAMU protesters have moved to the back of the @TAMU Administration Building to be closer to Provost Carol Fierke’s office window. “While we don’t know if she’s in the office, we should chant as though she is.” @TheBattOnline pic.twitter.com/lTnYxKlvCf

Despite widespread concern among the graduate student worker population at large, Embree said her requests to move her in-person class online have been stuck in a loophole among the Office for Graduate and Professional Studies, or OGAPS, the Office of the Provost and her academic department.

"One of the things we're finding is when we start asking questions to figure out what's possible, we're being shuffled around between different administrative units," Embree said. "That's one of the ways in which they are conveniently not addressing graduate students' concerns."

Embree said during OGAPS’s Aug. 14 virtual forum with Karen Butler-Purry, associate provost for Graduate and Professional Studies, and Dr. Shawn Gibbs, dean of the School of Public Health, GAWS pressed Butler-Purry to answer whether all graduate student requests to teach remotely had been honored. Butler-Purry answered that not all the requests could be honored, and some graduate students had been forced to teach in person, Embree said.

"Part of the issue is that some graduate students consented to teaching in person, but they did so under very different conditions,” Embree said. “Now that conditions are worsening very quickly and things are getting scary, there's no way for them to move their classes online."

Michael Roosa, Ph.D. candidate in physics and astronomy, said he attended the protest despite hearing criticisms of hypocrisy in the community because teaching in an enclosed space is categorically different from protesting outside where attendees are 10-feet away from each other with masks on.

"When people say it's hypocritical of us, they're missing the point that the university unilaterally decided that we would have to take on this risk [of teaching in person],” Roosa said. “[Protesting] is a decision that we have control over. This is the safest kind of action we could have made, and that's why we did it.”

Roosa said it’s pretty obvious to him that teaching in person poses a general health risk to the Bryan-College Station community.

“When your employer tells you that, 'Oh, sorry, I know that doing your job the way we think you should is more dangerous, but you have to do it anyhow,' that is coercive. That's the reason we're out here," Roosa said.

Myranda Campanella is an international studies junior with minors in journalism and French and managing editor for The Battalion. Before serving as managing editor, Myranda was the assistant news editor and a news reporter.

This article represents the student side very well. It would have been more valid if the administration's side was addressed.

Employees do not get to set the work requirements, the employer does. If a worker does not like or will not comply with the job requirements find an employer that will meet your "demands".

As a graduate student worker myself, I think an issue is there are not other options for many of us. Those that came to A&M with the promise of tuition wavers and graduate stipends cannot afford to not work for the university. Part time jobs simply cannot support many of these students, and I don't believe it is unreasonable for graduate student workers to be offered the same ability to teach remotely that many faculty members currently enjoy.