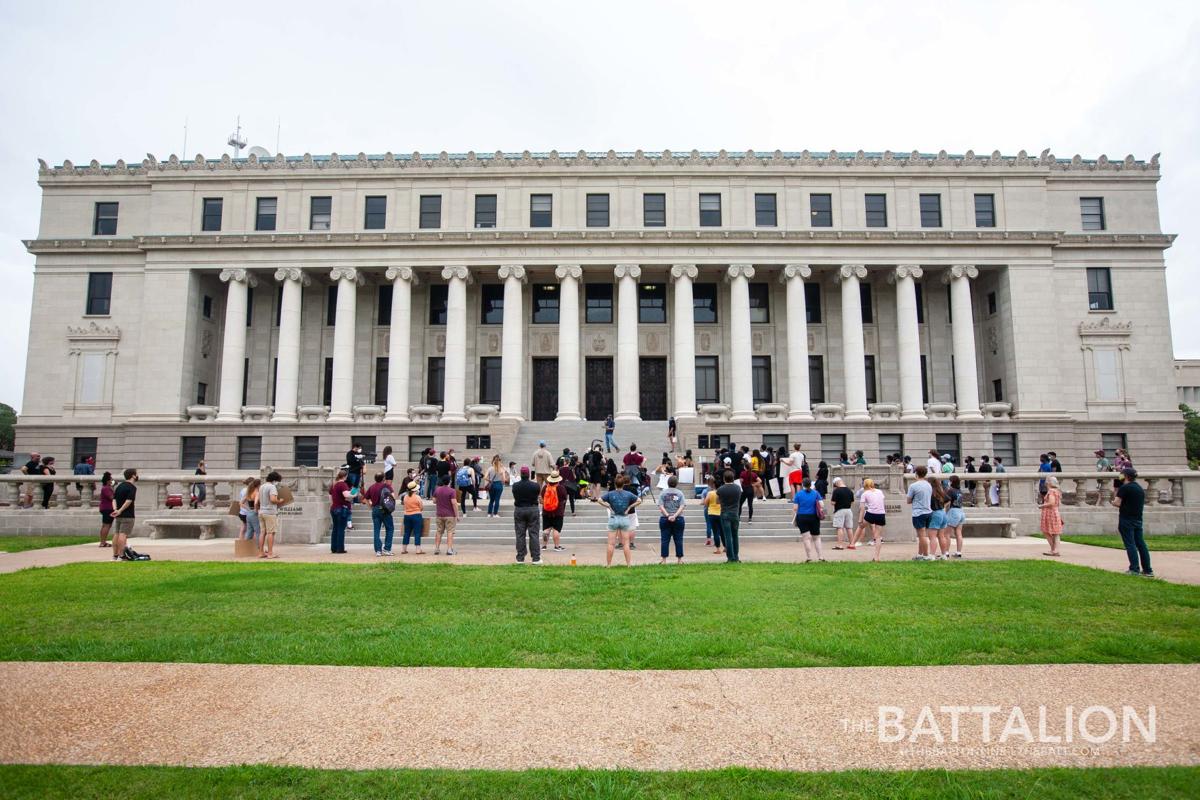 On June 26 anti-Sully protesters gathered at the Administration Building before marching around campus. 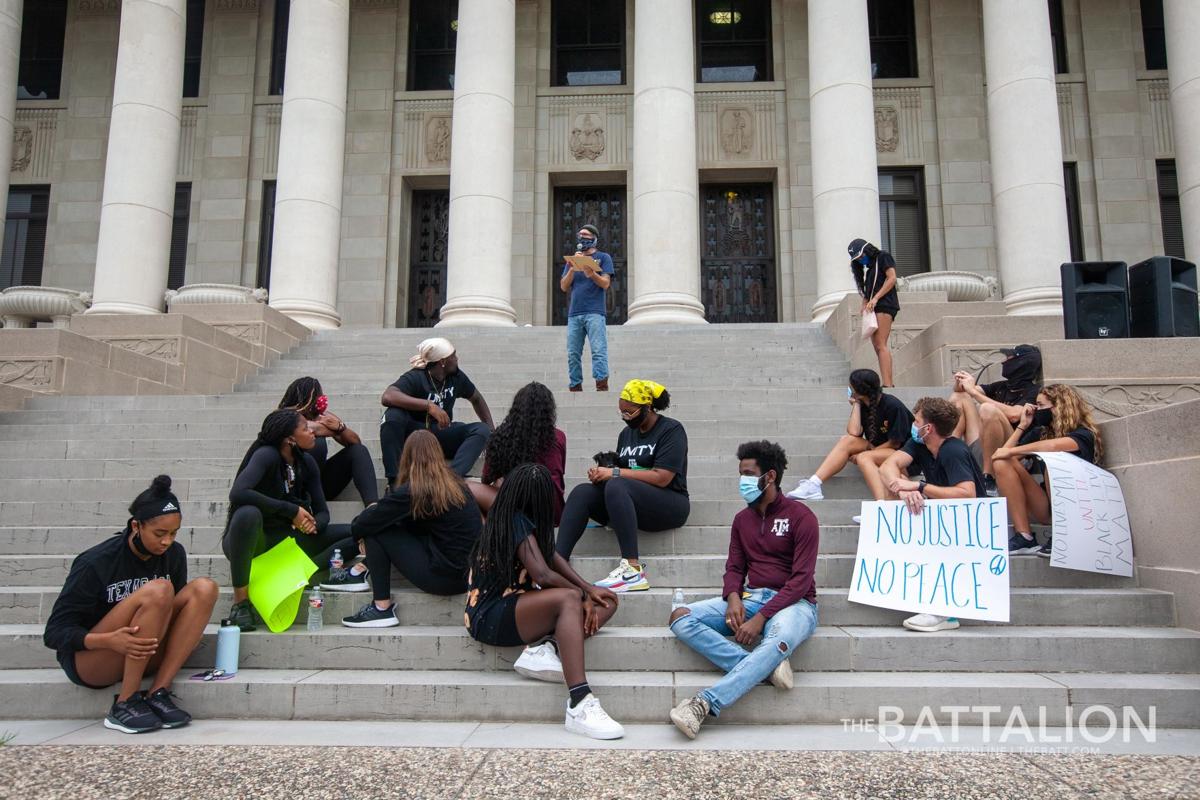 Anthropology professor Michael Alvard speaks before the march. Alvard was arrested two weeks prior at another protest. 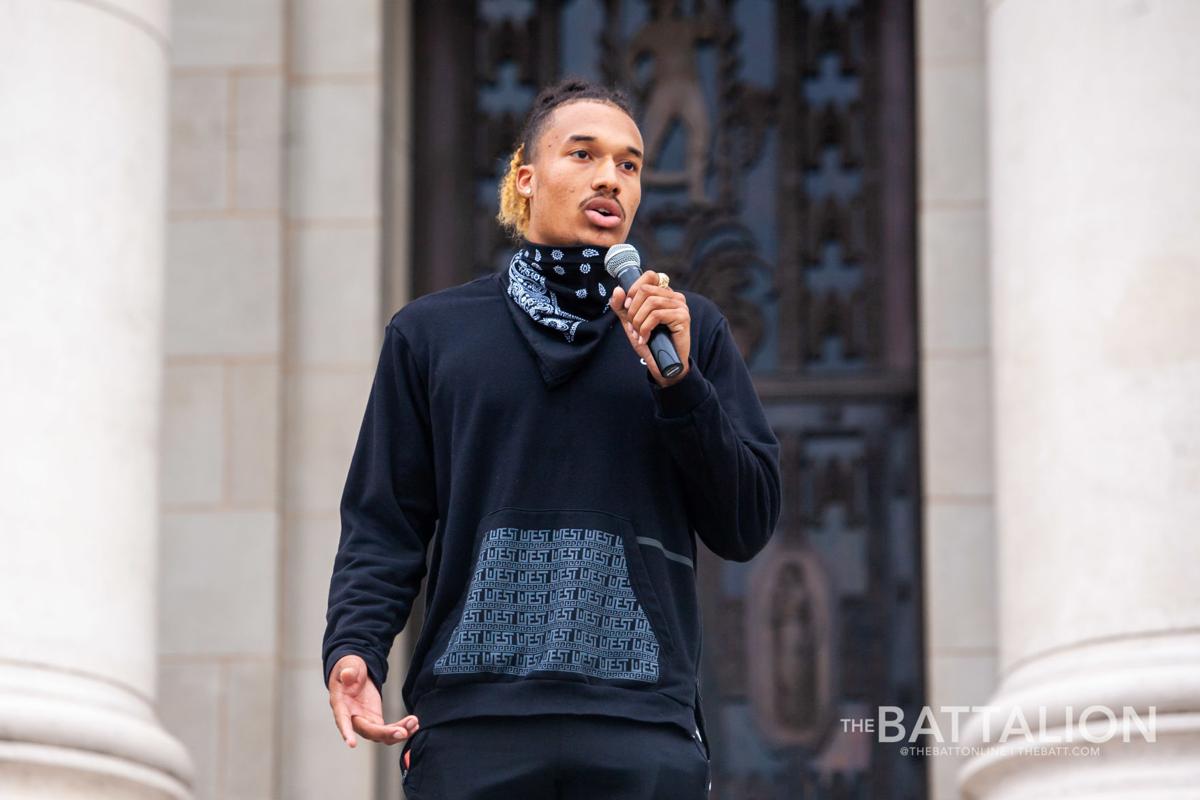 Senior quarterback Kellen Mond speaks to protesters on the steps of the Administration Building. 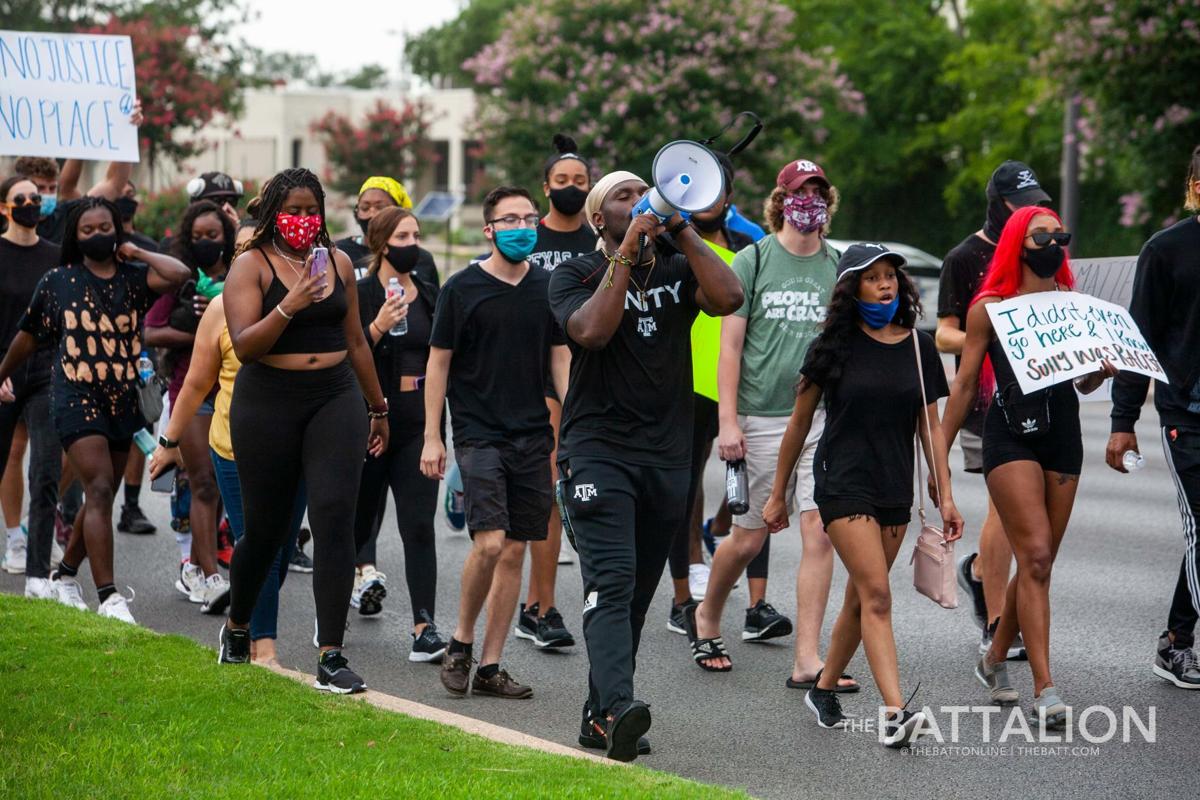 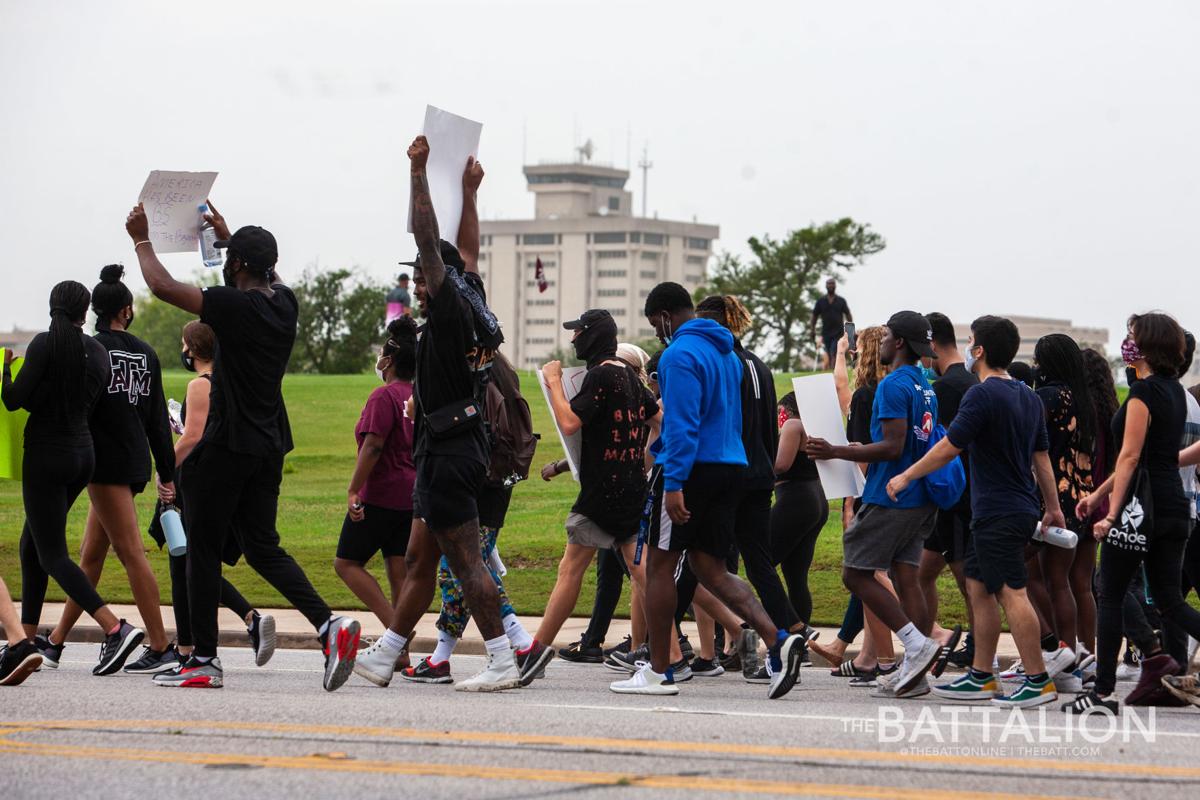 Protesters march around campus and down George Bush Drive. 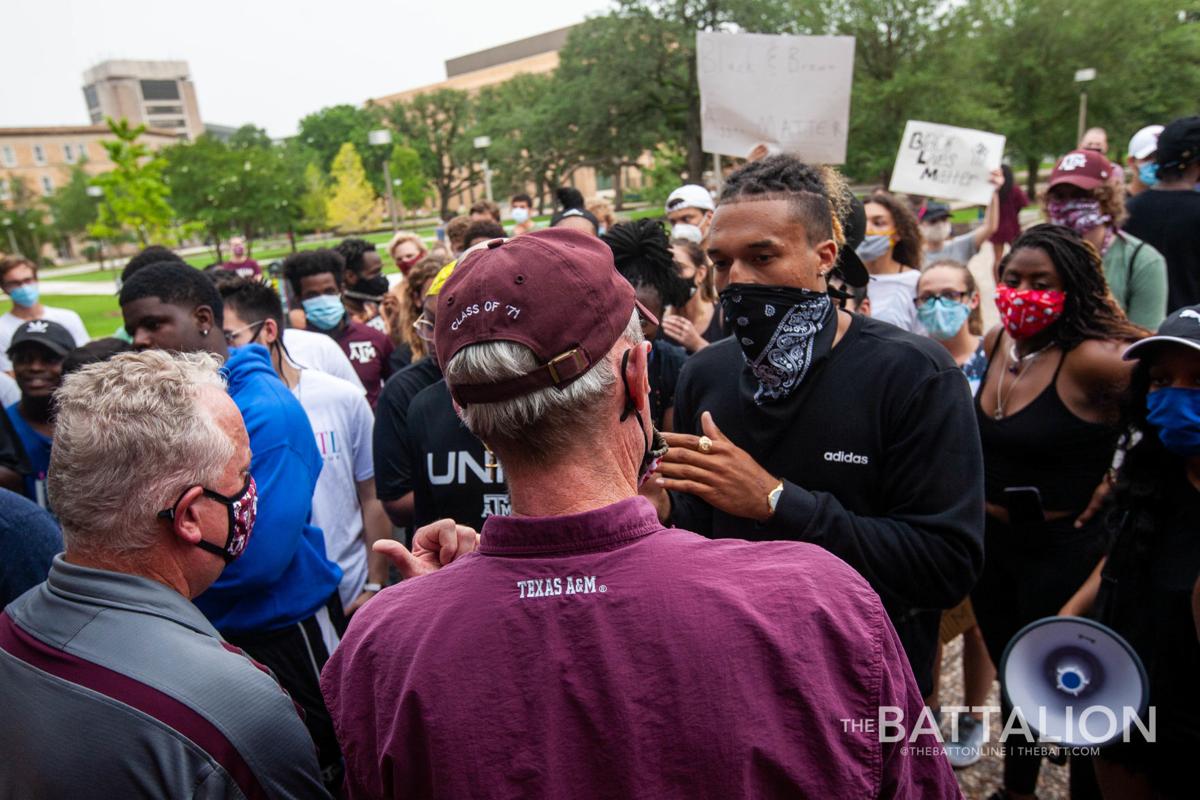 Senior quarterback Kellen Mond speaks with pro-Sully protesters as they stand in front of the statue. 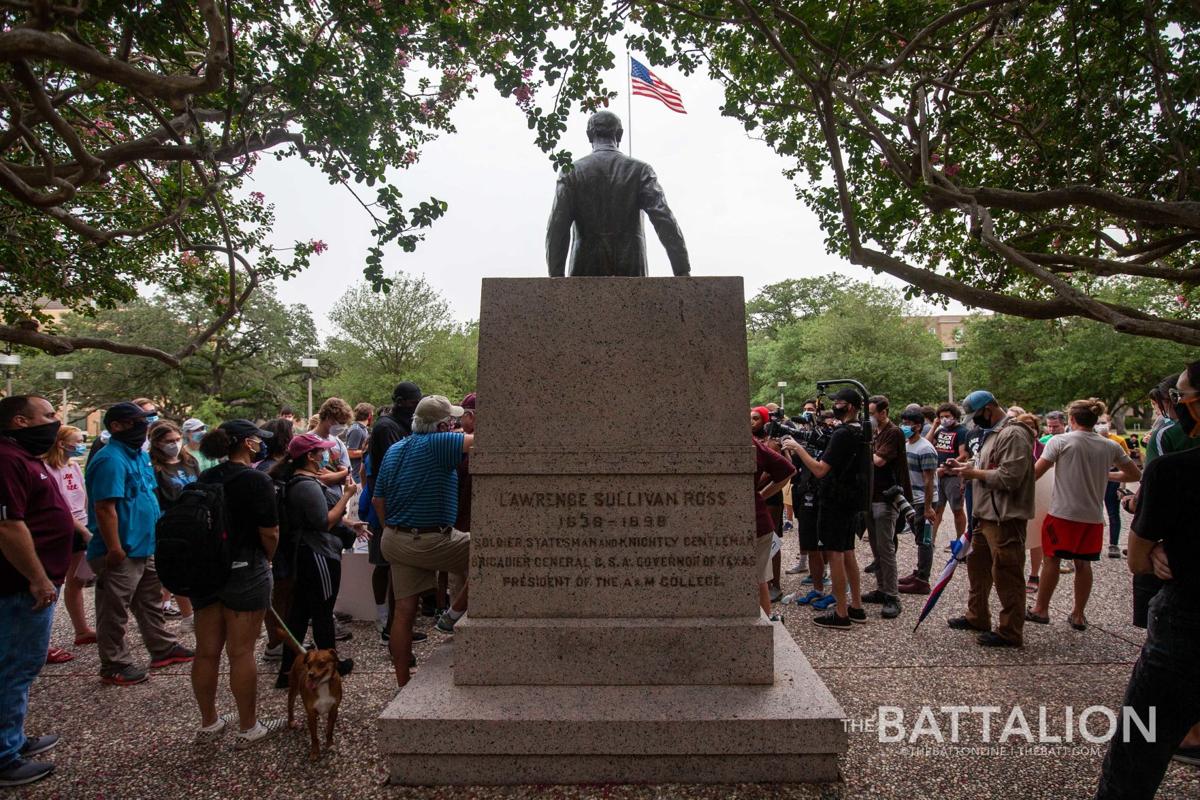 After marching around campus, anti-Sully protesters ended at Academic Plaza. 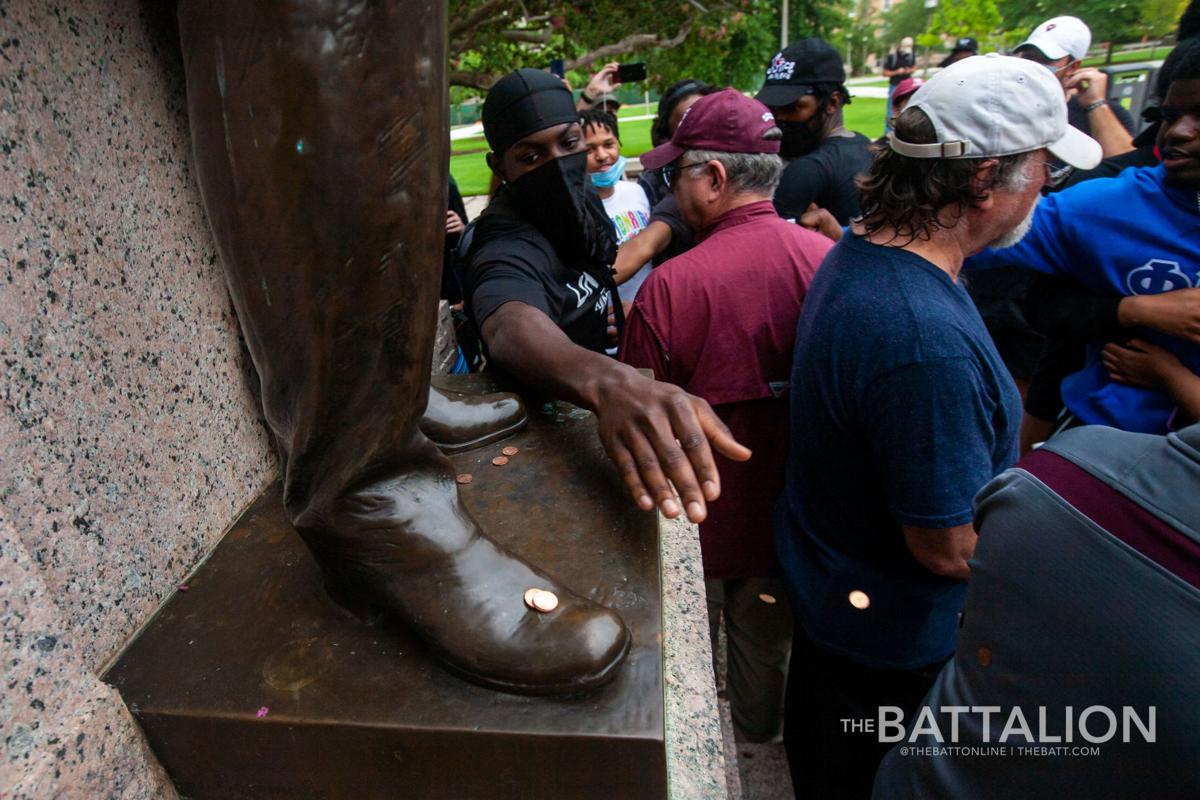 Senior track athlete Infinite Tucker swiped the pennies off of the base of the Sully statue. 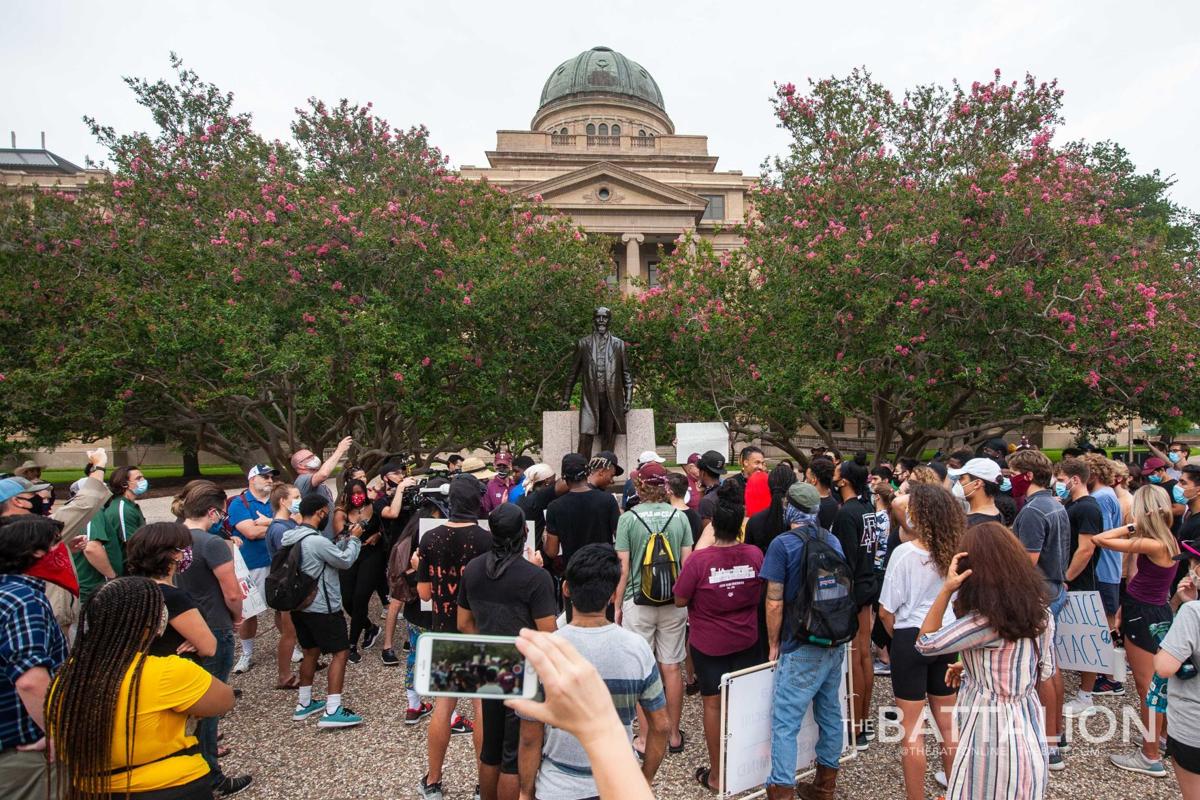 After marching around campus protesters gathered in Academic Plaza around the Sully statue.

On June 26 anti-Sully protesters gathered at the Administration Building before marching around campus.

Anthropology professor Michael Alvard speaks before the march. Alvard was arrested two weeks prior at another protest.

Senior quarterback Kellen Mond speaks to protesters on the steps of the Administration Building.

Protesters march around campus and down George Bush Drive.

Senior quarterback Kellen Mond speaks with pro-Sully protesters as they stand in front of the statue.

After marching around campus, anti-Sully protesters ended at Academic Plaza.

Senior track athlete Infinite Tucker swiped the pennies off of the base of the Sully statue.

After marching around campus protesters gathered in Academic Plaza around the Sully statue.

Several dozen people gathered in front of the Jack K. Williams Administration Building on June 26 to protest racial injustice and the presence of the Lawrence Sullivan “Sully” Ross statue.

Before marching, members of the student organizations and the A&M community spoke to the attendees. The march looped around the golf course, blocking a few lanes of traffic on George Bush Drive, and then through campus to the Sully statue. The protesters were met at the statue with Sully supporters, who stood in a line in front of the statue guarding it. Protesters said they did not intend to vandalize the statue and were only there to peacefully protest.

At the gathering in front of the Administration building, sport management senior and A&M quarterback Kellen Mond said he has been researching the events happening on campus for the past few weeks, and he believes changes need to happen.

“The hardest thing, I feel like, is for people to learn new things, but it’s even harder for people to unlearn what they already know,” Mond said. “That’s part of traditions and history.”

Carlos Aleman, Class of 2019, said non-white protesters and allies of the movement have a responsibility to fight against racial injustice. Alaman said he knows what racial injustice feels like because of his experience immigrating to the United States from Mexico.

“To my fellow Aggie minorities, I know you’re in pain, but now is the time to hone in on that pain and make change,” Aleman said. “It’s time to unite against the campus culture and university administration that has disrespected our representation.”

Anthropology professor Michael Alvard, who was arrested at the protest in Academic Plaza on June 13, said the A&M administration has to deal with the fact that the students at these protests are the future, and that the Aggie core values do not align with Ross.

“These values, we know them as Aggies — excellence, integrity, leadership, loyalty and especially respect — are not consistent with the life of ethnic cleansing, violence, slavery, segregation and the Jim Crow racism that featured so conspicuously in the life of Lawrence Sullivan Ross,” Alvard said.

Another student who spoke at the Administration Building was Jalia Joseph, sociology graduate student and member of BGSA. She said she is tired of the blatant racism she and others have been shown on campus. Additionally, she said she disapproves of the way the university administration has been handling the demand for social justice.

“I am so over the emails, the letters and the f*cking committees,” Joseph said. “We’ve been promised a lot of stuff that’s not being delivered, and it’s clear to us that we are the only people who are going to liberate ourselves from this situation. This administration and the people at this university, clearly don’t give a damn about us and they make that sh*t apparent every time they send an email.”

Political science senior Qynetta Caston said racist events toward Black students at this university such as the racial slur found on a note on a student’s car will not be tolerated. She also shared her experience of being a Black woman at A&M, and said she won’t stand for any more injustices.

“Being Black at A&M means that your identity as a Black woman or a Black man causes such disdain towards people that they decide to put racial slurs on your car,” Caston said. “We are done being told that our voices do not matter. We are done being ignored by the Texas A&M administration.”

Among the pro-Sully attendees was Rick Cromack, Class of 1997, who said he respects the opinions of the protesters today, and fully understands their stance on the matter.

“Regardless of what our differences are today, I want to say something to all of you in sincerity: y’all are the future legacy of Texas A&M University,” Cromack said.

Cromack also said Ross has impurities just like every other person, and he thinks the good Ross did outweighs his mistakes.

“This isn’t a congregation of two-percenters,” Cromack said. “Y’all are passionate. Y’all are out here on a day when the mosquitos outnumber us. Y’all are sweating and that does stand for something. Now, you and I may not agree 100 percent. I do respect the passion, the conviction and the desire to make a difference in the world, because that is my A&M.”

The two groups peacefully spoke to each other, asking questions and debating their causes. At one point, a protester swiped off the pennies sitting at the feet of the statue. Another incident occurred in which a protester was upset over words that passed between him and a Sully supporter. The two remained silent, but stood very close to each other and made eye contact for minutes, but never touched. Mond said he recalls that the Sully supporter called the protester a “Blaggie,” and that is why the protester got upset. Despite occasional high tensions, the protest remained peaceful and concluded around 8 p.m.

Speaking to all of the attendees, Aleman said it is the responsibility of everyone, regardless of race, to take a stand against injustice.

“We need you to speak out against racism, raise awareness among your communities and be openly anti-racist and nothing short of that,” Aleman said.

The pro-Sully demonstrators seemed trying to be really, really, conciliatory & nice. Not that it makes much difference. The anti-Sully, "anti-racist" crowd doesn't want niceness & conciliation. They want surrender. Maybe next time the pro-Sully folks can "take a knee," bow down, shine the shoes of the antis. But that won't appease the righteous anti-racists for long - they'll still want Sully in dumpster. Even then they won't be satisfied for more than five minutes. Sully himself would understand what the anti-racists, BLM, & the rest of this bunch really want: power. The power to re-make A&M in their own image & according to their own beliefs. And whatever A&M will be when they finish taking power, it won't be nice.

I believe that thoughtful, insightful, discussion, on this matter, is healthy and beneficial and I hope it continues. However, if either party can't do so without it being a profanity-filled, classless communication like the one example in this article, people aren't going to continue to listen. That type of communication certainly loses my respect for the communicator. Keep talking, keep listening, and stay classy and professional. Those are the values that need to be exhibited if positive change is going to occur.