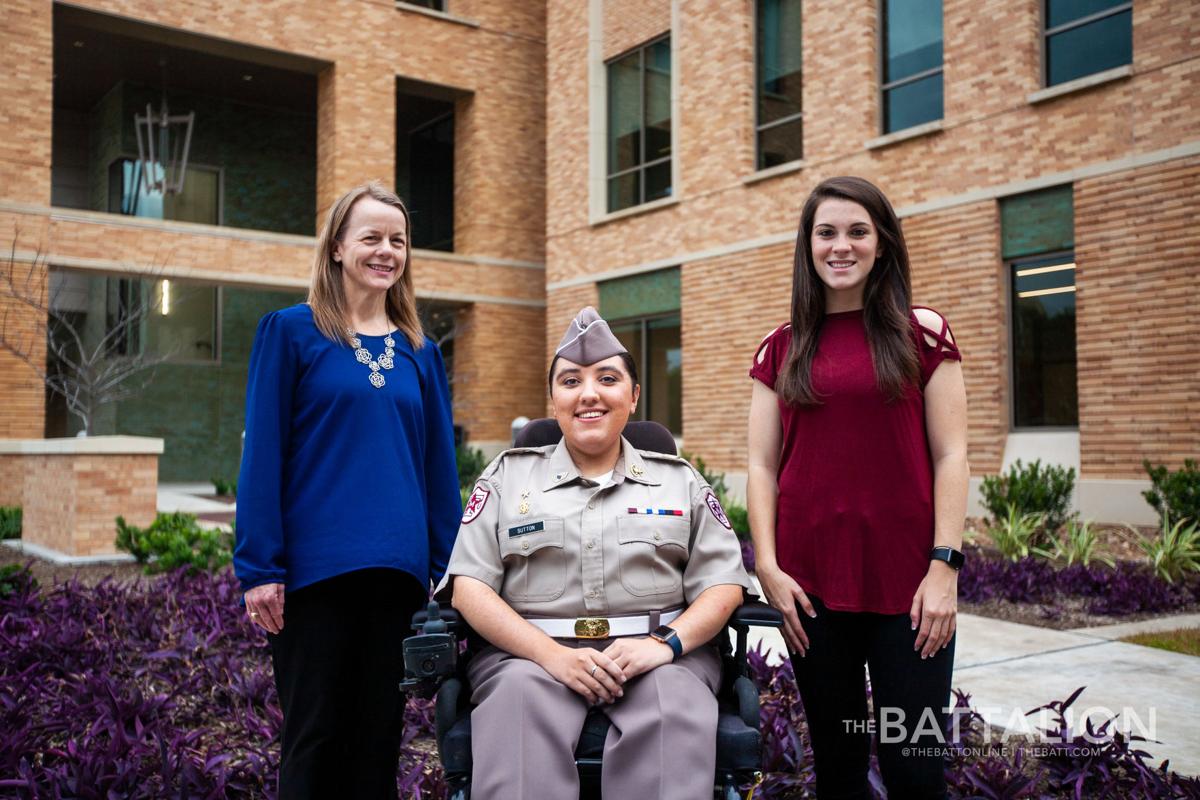 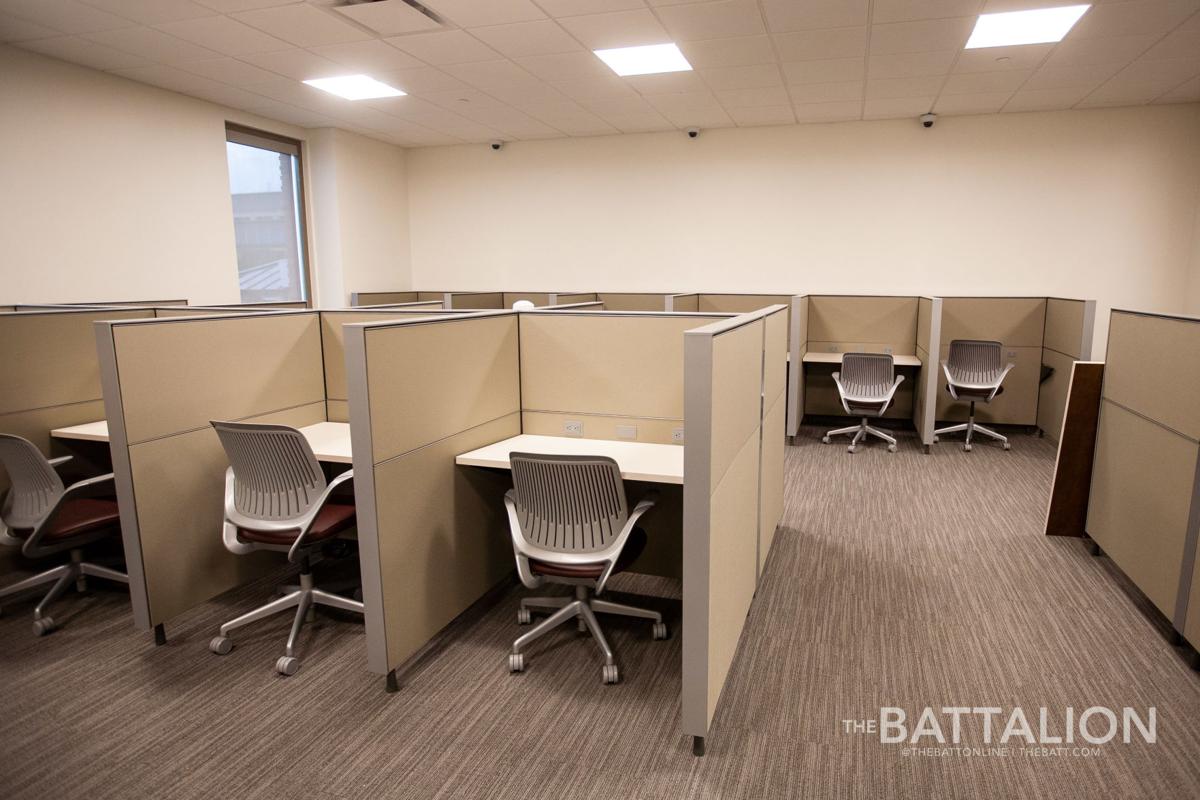 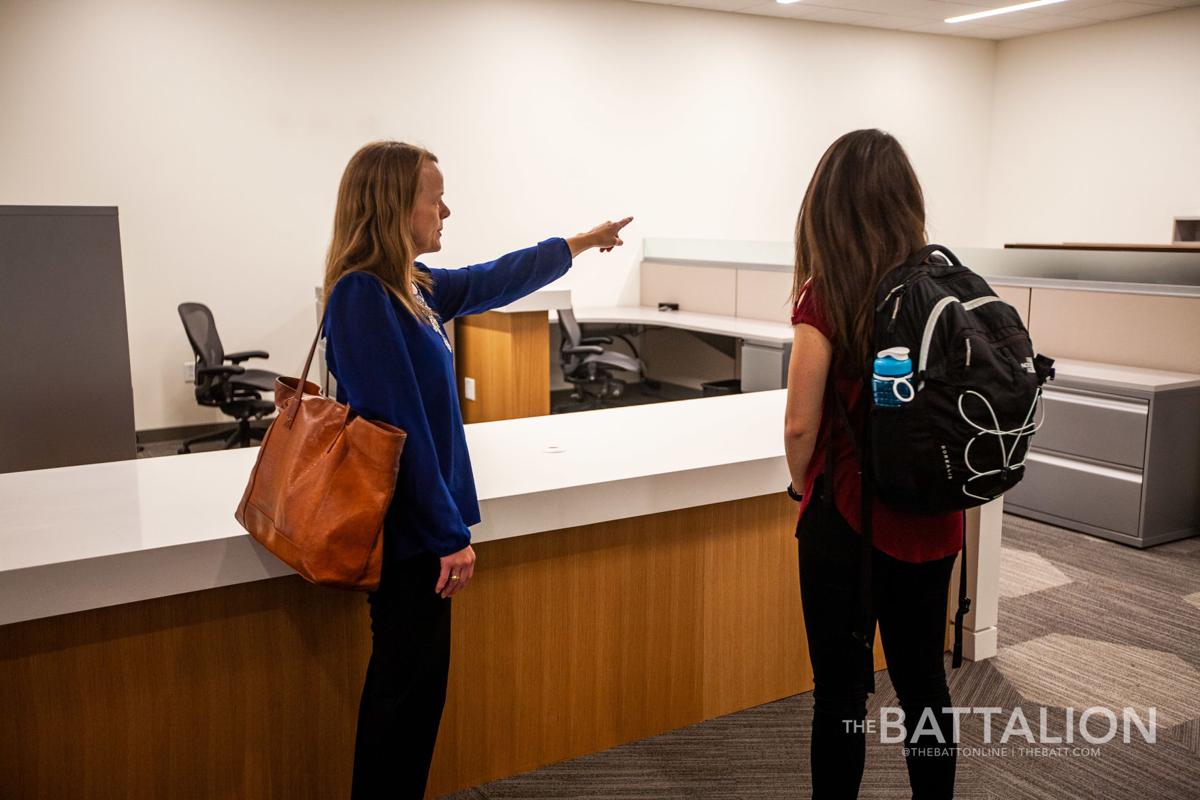 Director of Disability Resources Kristie Orr shows Victoria Mancuso the office spaces in the new Student Services Building. The new space will have more room for staff so that students looking to speak with an access coordinator will have shorter wait times. 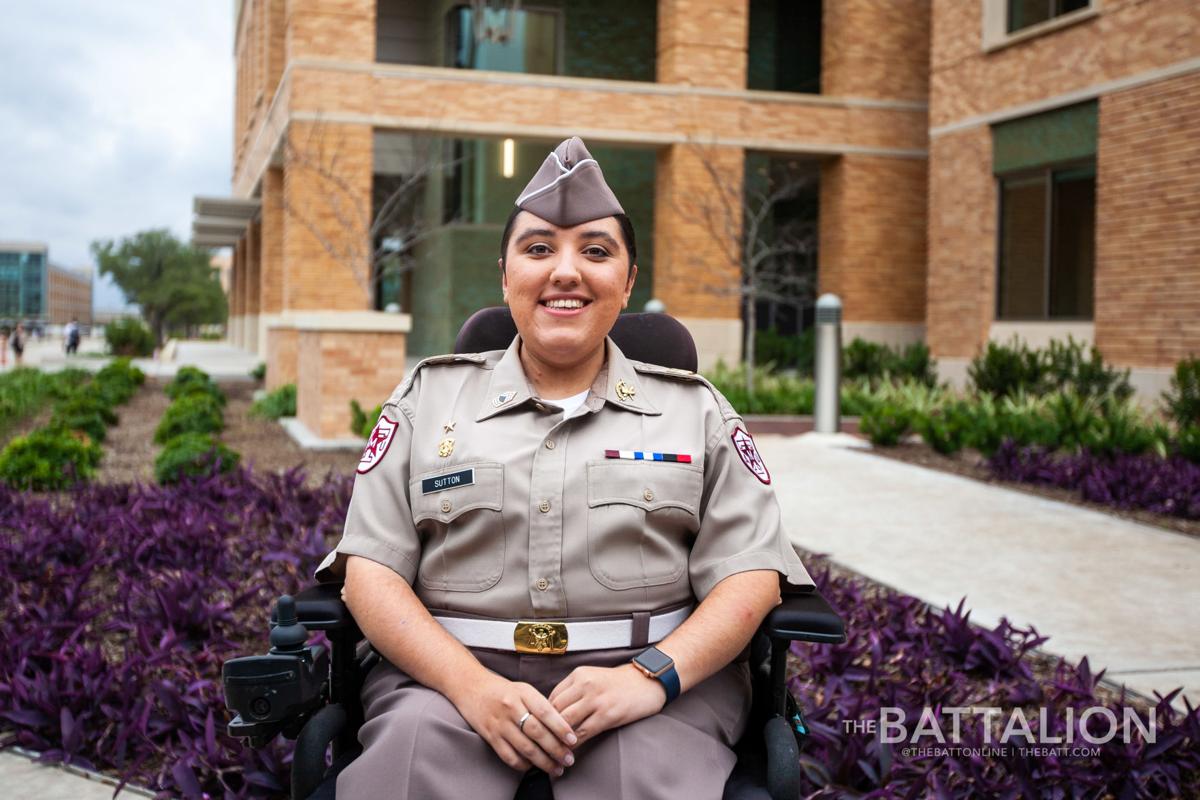 Taylor Sutton is an ag. leadership and development junior in the Corps of Cadets that uses Disability Resources. 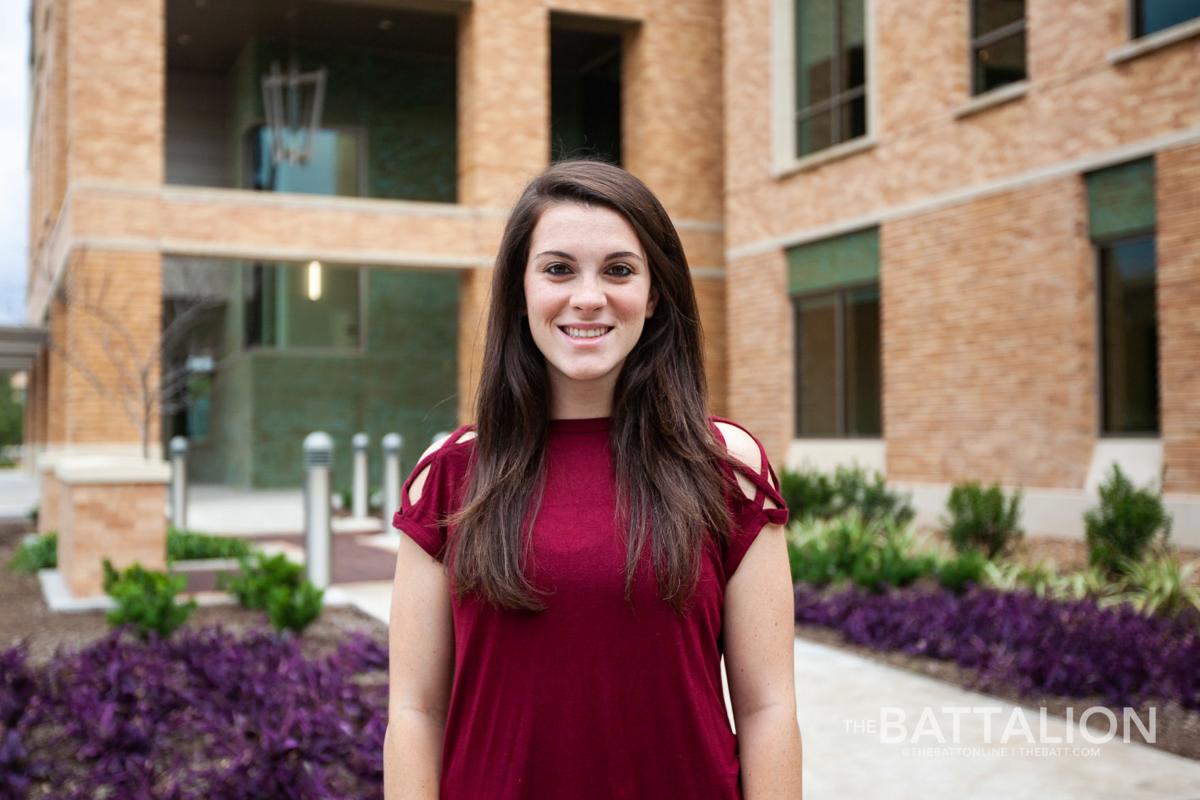 Victoria Mancuso is a communications senior that uses Disability Resources.

Director of Disability Resources Kristie Orr shows Victoria Mancuso the office spaces in the new Student Services Building. The new space will have more room for staff so that students looking to speak with an access coordinator will have shorter wait times.

Introduced in the House and Senate in 1988 and signed into law on July 26, 1990, by President George H. W. Bush, the Americans with Disabilities Act is a civil rights law that protects people with disabilities from discrimination.

Nearly 30 years after its passage into law, on the campus where President Bush is now buried, the ADA has served as a guide for how Texas A&M and the country at large provide access and accommodation for all of their students and citizens.

“Our mission is to collaborate with faculty, staff and students in order to provide an equitable learning environment for students with disabilities here on our campus,” Orr said. “We collaborate with faculty, staff and students, and it is intentionally that order because our goal is to make Texas A&M more accessible and welcoming and not relying as much on accommodations.”

Disability Resources is currently housed on west campus but will complete its move into the new Student Services Building on main campus next semester.

Upon a student’s first visit to Disability Resources, they will meet with one of nine access coordinators with whom they will discuss accommodations to help them complete their education. Some of the accommodations offered through Disability Resources include extra testing time, American Sign Language interpretation, lecture transcription, peer note-takers, access to the instructor’s notes and access to text-to-speech software.

Although these accommodations do aid students in completing their classwork, Orr said proper preparation from instructors with Disability Resources allows students the opportunity to access their education without requesting the resources they require.

“We want our learning environment to be accessible to everyone,” Orr said. “We do this by making sure that there are things put in place in the classrooms so that students won’t need to ask for accommodations, because they have already been built into the class.”

This proactive practice is known as universal design and was created so all people can access and understand the environment regardless of their ability or disability.

“Think of universal design from an architectural standpoint, because that’s where universal design started,” Orr said. “Things like ramps or curb cuts are made for people that use wheelchairs to have access, but really ramps help everyone. The same thing can happen with learning.

“If an instructor puts their notes on eCampus so that they are online and available for everyone, then students who need note-taking as their accommodation will not need that accommodation anymore because the notes are available to everyone.”

Similarly to how universal design has evolved from ramp access to access to lecture notes, the ADA has also evolved to accommodate people with invisible disabilities in addition to people with visible disabilities. Today, universal design methods are common throughout a student’s education in primary school, secondary school and even in a student’s pursuit of higher education.

Communication senior Victoria Mancuso benefits from universal design along with the accommodations provided to her by A&M Disability Resources.

Diagnosed with dyslexia in kindergarten, Mancuso has used accommodations throughout her education to help with reading and processing the material she is taught.

“I get notes from all of my professors and I take my tests in the testing center with extended time,” Mancuso said. “I also use text-to-speech to take my tests and do major assignments, and if I don’t have access to that, I can go to Disability Resources and have someone read things to me.”

Like Mancuso, agriculture leadership and development junior in the Corps of Cadets Taylor Sutton also uses accommodations provided by Disability Resources. Sutton, who was diagnosed with spinal muscular atrophy type 3 at age 4, not only benefits directly from universal design principles within her curriculum, but from ADA compliance across campus.

“You can’t really judge a person by what you see on the outside because there are barriers and challenges that you can’t see,” Sutton said. “You may have the assumption that ‘she’s in a wheelchair so she can’t do this,’ but actually I can do those things and so much more.”

Despite the physical limitations of her wheelchair, Sutton said she participates in Corps activities just as every other cadet does.

“I’m there every morning for formation and I’m doing [physical training] with everyone else,” Sutton said. “Although I’m not able to do pushups or whatever else they do, I still participate. When they go on runs, I’m right behind them going as fast as my wheelchair can go.”

Outside of the Corps, Sutton uses Disability Resources for accommodations within her classes and participates in several student organizations.

Much of A&M’s campus is ADA compliant, though compliance and convenience are not the same thing.

Having to go through back entrances, being forced to sit in the back of auditorium-style lecture halls and the occasional out-of-service elevator are just a few of the accessibility issues that Sutton said she has experienced.

“I haven’t had any issues [entering] any buildings yet other than having to go through back entrances in a few,” Sutton said. “Sometimes in buildings, the elevators won’t work so I just won’t be able to go to class that day.”

In situations like this, Orr said students are accommodated outside of the classroom by professors through one-on-one instruction or with class notes provided by their instructors.

“We have had issues in Heldenfels, for example, where the elevator is out of service,” Orr said. “So we work with the faculty member to set up one-on-one tutoring with the student who was unable to attend class so that they get the same information as the other students while the elevator is being fixed.”

“In situations where there is a crisis like an elevator not working or floodings, we will work with faculty and the student to take care of the issue on a short-term basis,” Orr said. “If it is an issue that will last longer, then we will work with the Registrar’s Office to get the class moved to a different building.”

For the most part, ADA compliance and accessibility issues can be reported to a campus ADA Coordinator, but for a few of the buildings on A&M’s 143-year-old campus, compliance cannot be required.

According to ada.gov, “A public accommodation generally would not be required to remove a barrier to physical access posed by a flight of steps, if removal would require extensive ramping or an elevator.”

This exception proves problematic when considering a building like the Military Sciences Building on main campus. As one of the only buildings on campus without an elevator, the structure is inaccessible for anyone unable to climb stairs.

“There are only a few [buildings] that are a problem,” Orr said. “We encourage students to look online or to go visit the building if they think they will have trouble accessing the building. If we know a building is inaccessible, we will notify students, but we work with about 2,500 students a semester, so we are unable to look at everyone’s schedule.”

An accessible entrances feature is available on aggiemap.tamu.edu for students and visitors who may need help navigating campus. Additionally, Associate Vice President of the Office of University Risk and Compliance Peggy Zapalac said ADA concerns can be directly reported to ada.coordinator@tamu.edu.

Another issue faced by students using accommodations has resulted from the transition period involved in relocating the Student Services Building. Mancuso said because of the move to a temporary space on west campus, testing centers have become crowded.

“During finals, you are probably in a class with 30 other people, which isn’t a lot, but it’s a big step up from the four people with you during regular exams,” Mancuso said. “The people on your left and right are probably taking a different test and that may make you lose focus on your test. I get nervous when people finish their tests before me, too.”

Orr said this issue will be addressed with the move to a more permanent home on main campus.

“Our new testing center will be about twice the size of the one we have right now, so it will be easier for us to accommodate the students that need testing modifications,” Orr said. “We have taken every student and their accommodations into account when designing this new building.”

Opening for student use during the spring semester, the new Student Services Building will house Disability Resources, Student Counseling Services, Residence Life and the Office of the Dean of Student Life. Accessibility features in the new building will include single-person testing rooms, carpet designed in a uniform way so it does not disturb a student with focusing disorders, wind chimes by the entrances to signal to students with vision impairments that they are nearing the door and bathrooms built to be accessible to students who use a wheelchair or crutches.

Even with the plethora of accommodations available through Disability Resources and at the new Student Services Building, Mancuso said it is imperative that students remember the importance of advocating for their needs.

“Having this disability has made me a bigger advocate for myself, and it has taught me a lot,” Mancuso said. “Having accommodations ready for you is great, but learning to advocate for yourself has definitely become a strength of mine.”