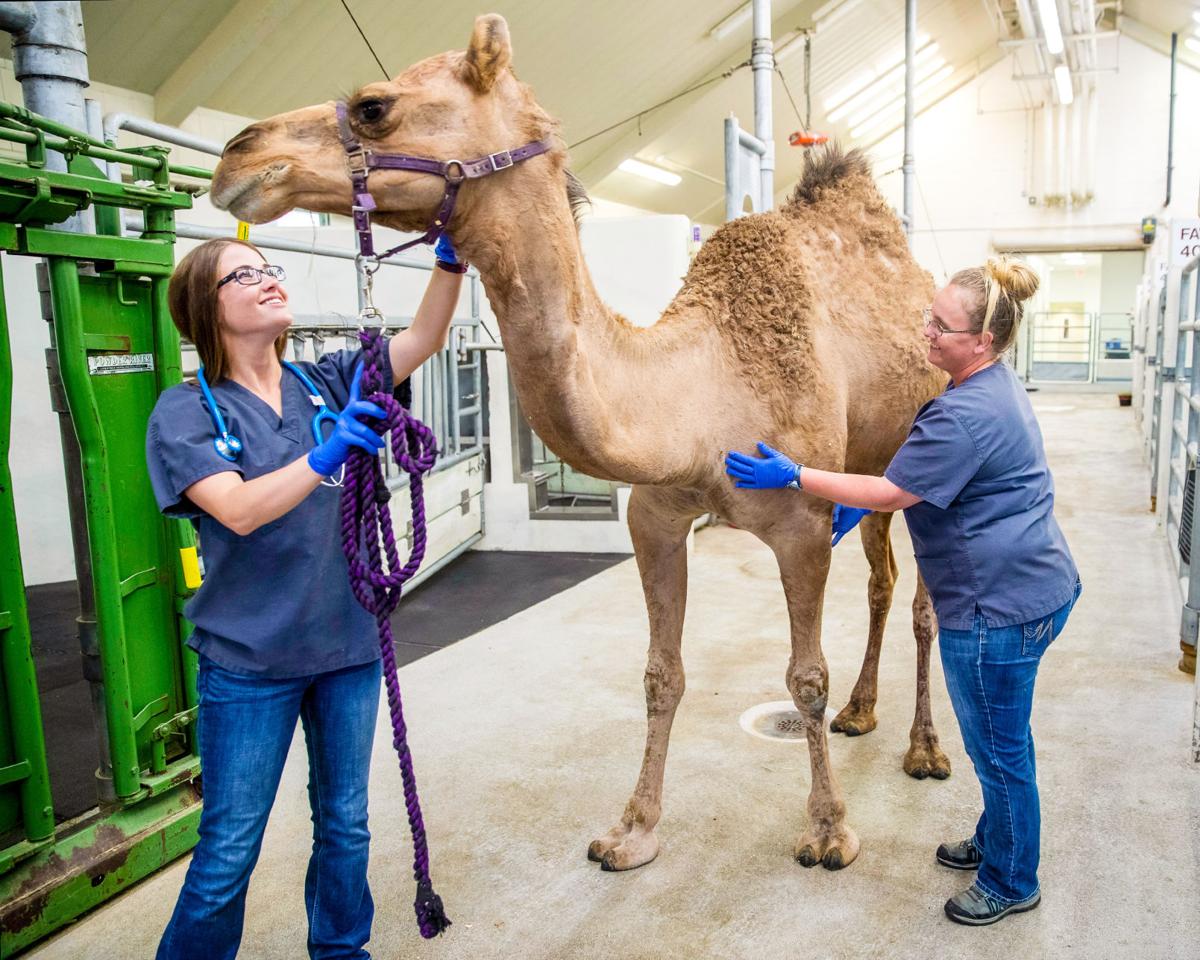 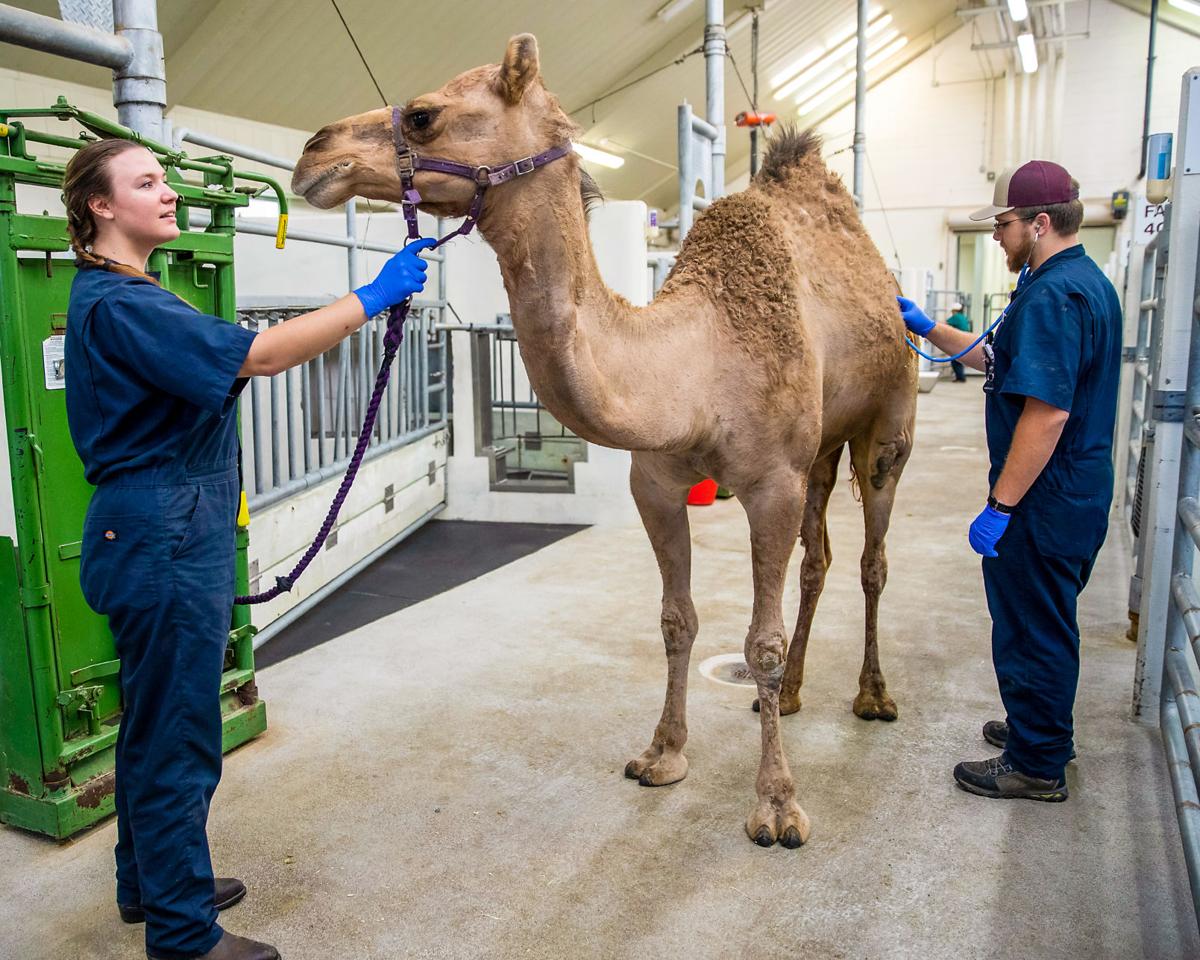 In June 2019, a ranch hand at the McMurry family ranch in Jasper noticed that Sybil, a 7-year-old dromedary camel, was limping on her hind leg. Sybil was taken to Texas A&M’s Large Animal Hospital (LAH) and radiographs revealed she had a dislocated hip.

According to Kati Glass, clinical assistant professor at LAH, treatment options for large animals with major hip dislocations like Sybil’s are limited and rarely have positive results. With Sybil’s size, surgery was unlikely to be successful and would most likely result in her being put down so she would not have to live a life of discomfort.

Ron McMurry, Sybil’s owner, said he was very adamant about trying whatever was possible. McMurry knew the risks of surgery but said it was worth trying for Sybil, especially since she was pregnant.

“I owed it to Sybil and to her two-month-old fetus,” McMurry said. “If it could be done anywhere, it was Texas A&M.”

Despite LAH working primarily with horses and large farm animals, Sybil’s case was taken on by Glass. She said she was disappointed with the diagnosis but grateful to have the opportunity to try to help Sybil.

“I felt like we didn’t have good options,” Glass said. “I knew the McMurry family was going to be adamant that we did everything we could, so I immediately got on the phone and talked with some of my colleagues who work with large animals and have had the opportunity to work with camels.”

Glass was joined by a surgical team including large animal surgery residents Lauren Richardson and Alyssa Doering, fourth-year veterinary students Amanda Armendariz and Shanna Keshvari and a team of anesthesiologists. The group was successfully able to relocate Sybil’s hip after several hours in surgery. After the hip was put back into place, Glass secured it with a stainless steel cable and screws, which were broken two days after surgery due to Sybil’s weight. However, Sybil’s hip remained in place.

“We are really passionate about doing the best thing for our patients, and we owe that to the McMurry family for giving us the chance to try,” Glass said. “These opportunities are when we learn so much about not only Sybil and her outcome but how we can do better for the next camel.”

Sybil’s surgery was Armendariz’s first surgery as a fourth-year veterinary student. Armendariz said the moment when the hip went back into place with a large pop was one she would never forget.

“Once the hip popped back into the socket, there was an uproar in the operation room,” Armendariz said. “It was a celebratory moment. Everyone was so excited.”

Keshvari said it was a learning experience she will never forget.

“I’ll be telling people about the surgery for years to come,” Keshvari said. “It will stick with me for a lifetime, especially since Sybil has such a good personality.”

After the surgery, Sybil’s baby was confirmed to be healthy. Sybil returned to the McMurry Ranch earlier this month. There she will continue to heal and eventually give birth. Her hip has stayed in place and she has a daily physical therapy regimen to ensure it continues to heal properly.

“Having the wonderful opportunity to give Sybil every chance possible is something we don’t always get that chance to do,” Glass said. “I’m so glad her surgery was successful and we were able to help.”