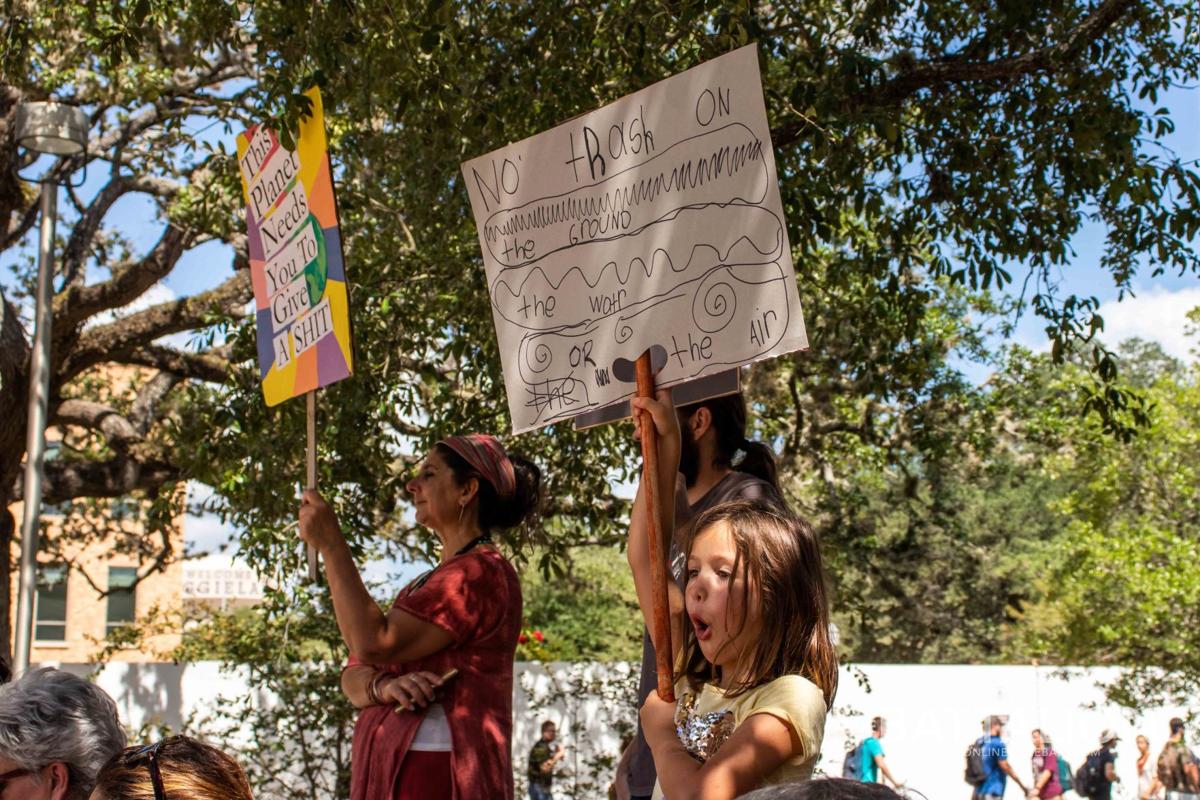 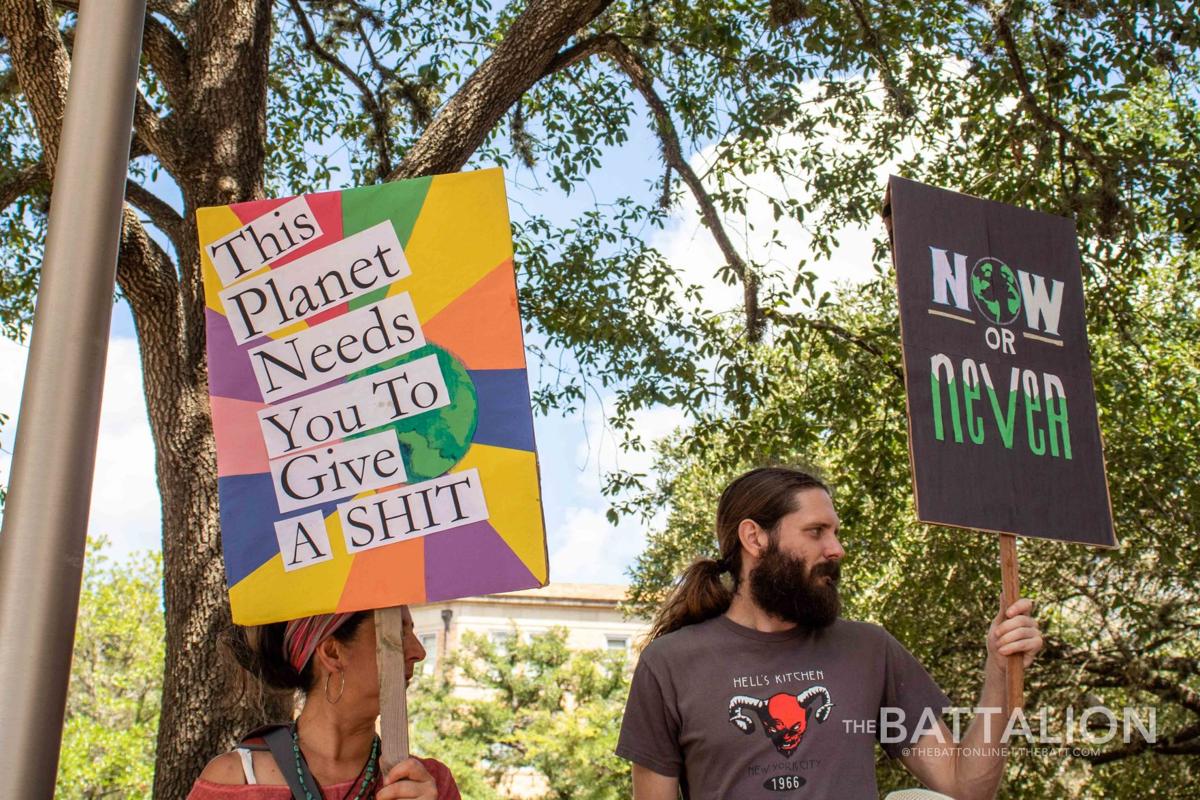 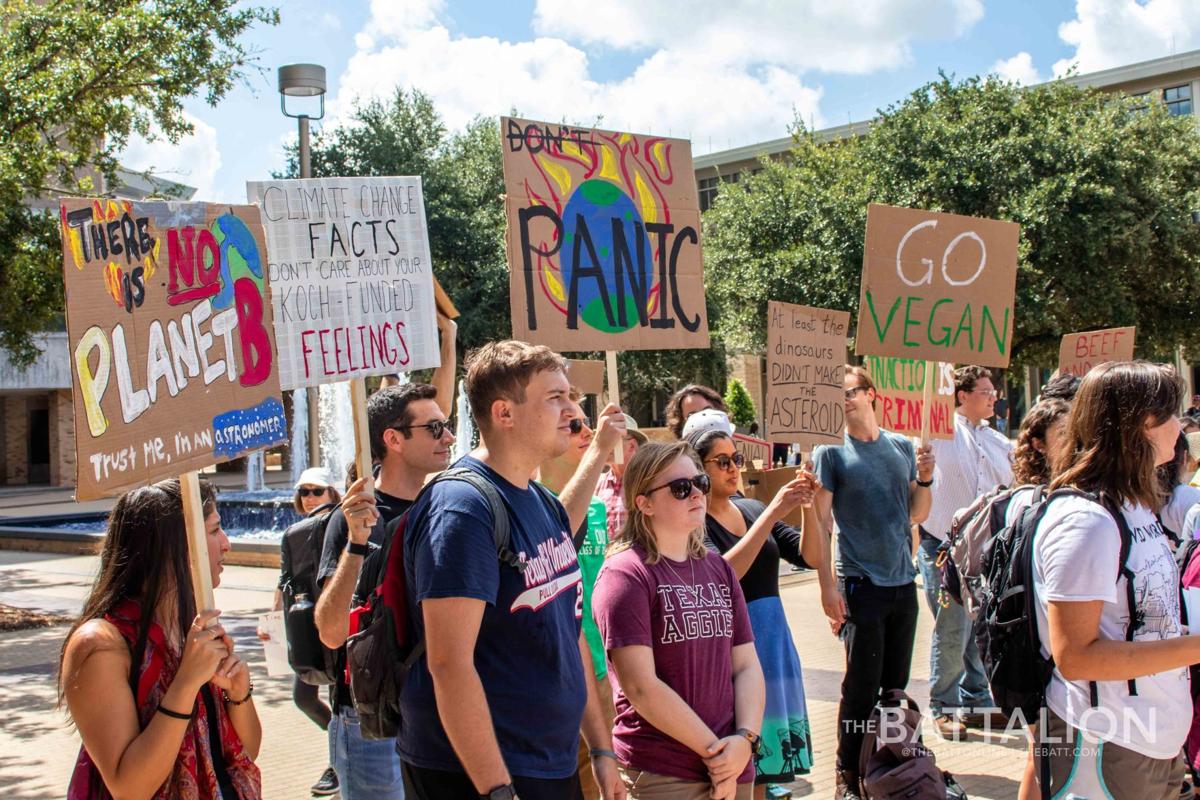 The Aggies for Climate Justice hosted the event and advocated for their four demands: decarbonize campus, divest from fossil fuels, aid the transition of current A&M employees to the new energy labor and to do it all without raising student’s tuition. Representatives from the Young Dems BCS, Feminists for Reproductive Equity and Education and Texas Rising attended the event and spoke on the intersection of climate change and other social issues. The protest commenced with a march to the Academic Building.

President of the Aggies for Climate Justice and biomedical sciences senior, Jacob Slaughter, organized the local protest and said that although their protest specifically brings attention to the issue in College Station, it is also a part of a much larger movement.

“We’re striking in solidarity with people across the world who are striking for the climate because they know we’re in a crisis,” Slaughter said. “We need local action in order to organize for broader movements.”

Sociology junior and co-president of Texas Rising, Victoria Guerrero said that along with the strike, the organization has created a social media campaign to spread awareness about A&M’s involvement with University Lands, a company that manages the mineral and oil interests of land across West Texas, after a faculty member informed them about the university’s work with the company

“Our main hope for today’s climate strike is not only getting students educated about A&M’s involvement with University Lands but, by spreading the information, we hope to keep our university accountable because they do have a very large direct involvement with not only the communities here in Texas but our climate.

President of Young Dems BCS, Stephanie Koithan, spoke about the influence of A&M’s donors and their environmental impact.

“I’m specifically highlighting the fact that the Charles Koch Foundation was the largest donor for A&M in 2018,” Koithan said. “Koch industries is the second largest privately held company in the nation and they are one of the major polluters in the nation.”

Political science senior and representative of Feminists for Reproductive Equity and Education, Avery Dalfrey, spoke to the crowd specifically about the intersection of climate change and feminism.

“In order to move forward and to work as a collective–as you see here–it’s a really diverse crowd we need everyone’s help and we can’t afford to pass over anybody because if we don’t work together this will ultimately fail.”

Dalfrey said she has high hopes that removing A&M funding for fossil fuels will make a big impact in Texas.

“This strike is specifically about having A&M divest from their fossil fuel corporations… it has been used in the past to great success,” Dalfrey said. “That’s why were trying to push this today, because we know that it works. We know that students will come together and try to make a point to the authorities of this school, we hope they listen.”

Climate change crisis? Are you kidding, seriously? Some of you have been drinking the liberal progressive Kool Aid.

Advocating TAMU divest itself of fossil fuels? You guys really are funny. I thought TAMU only accepted the best students? Standards have indeed fallen.