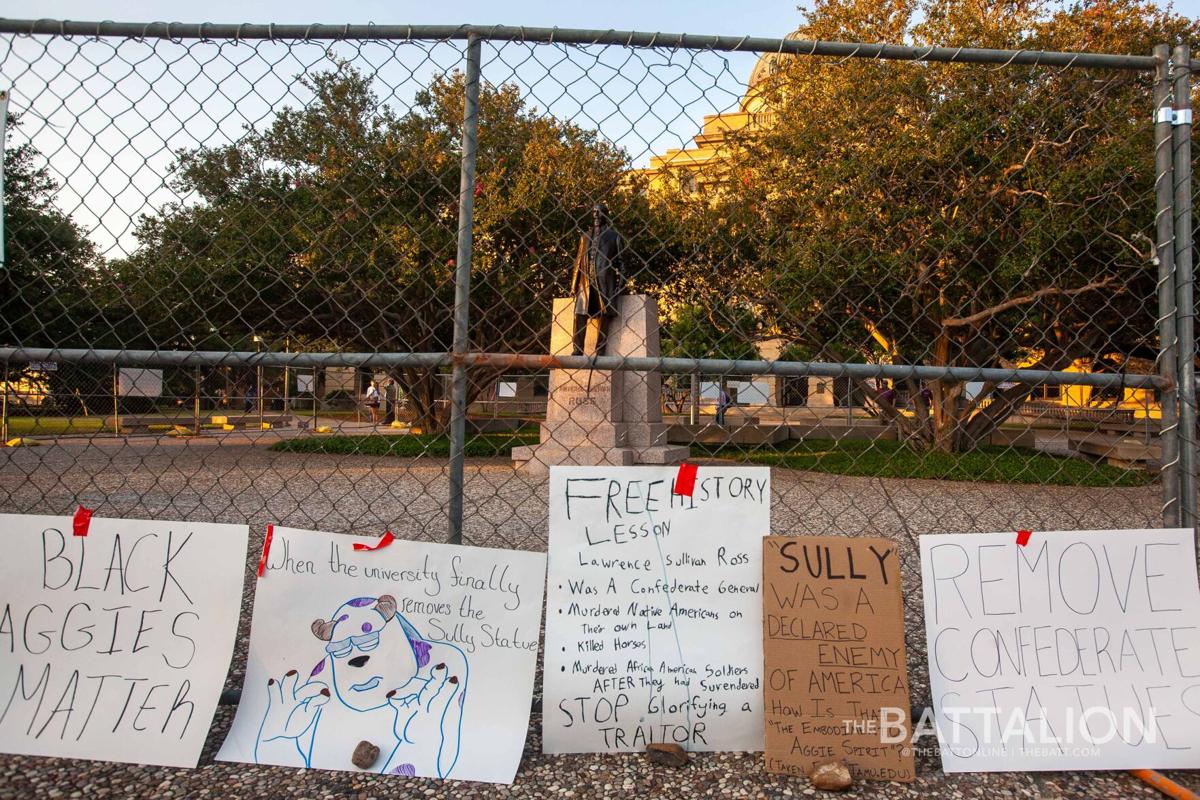 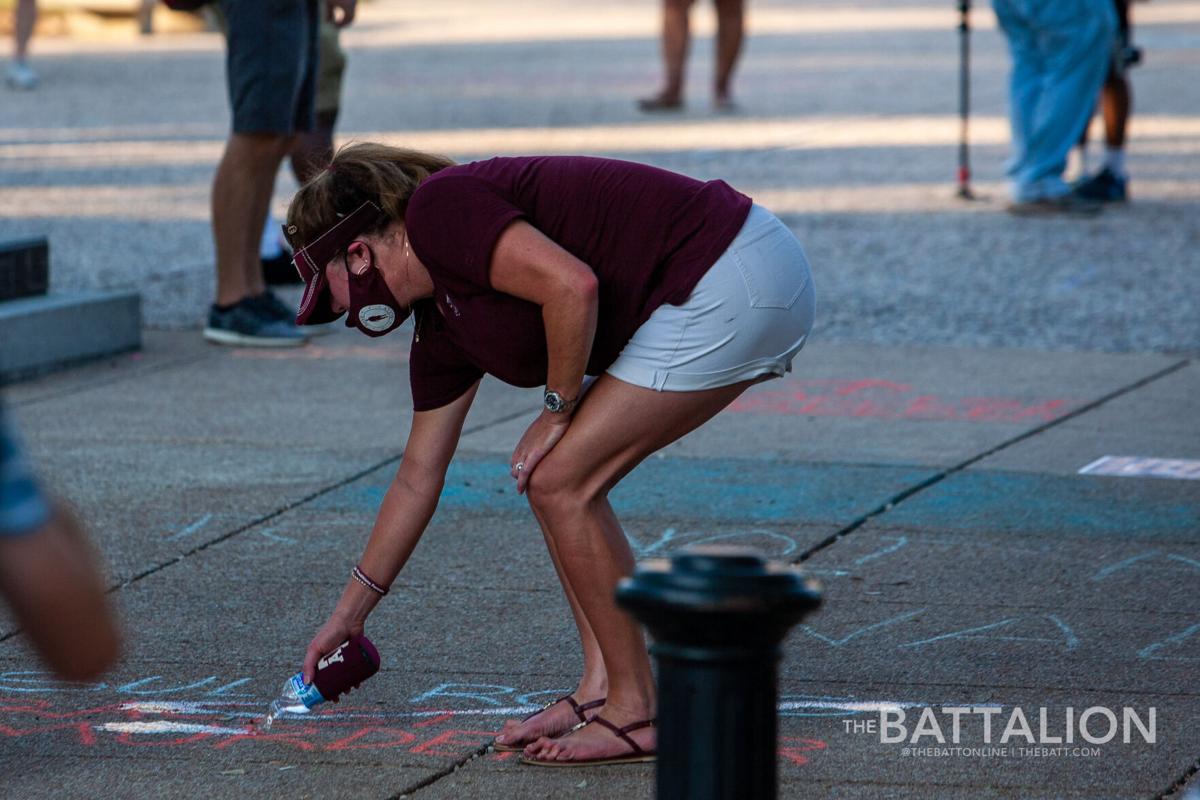 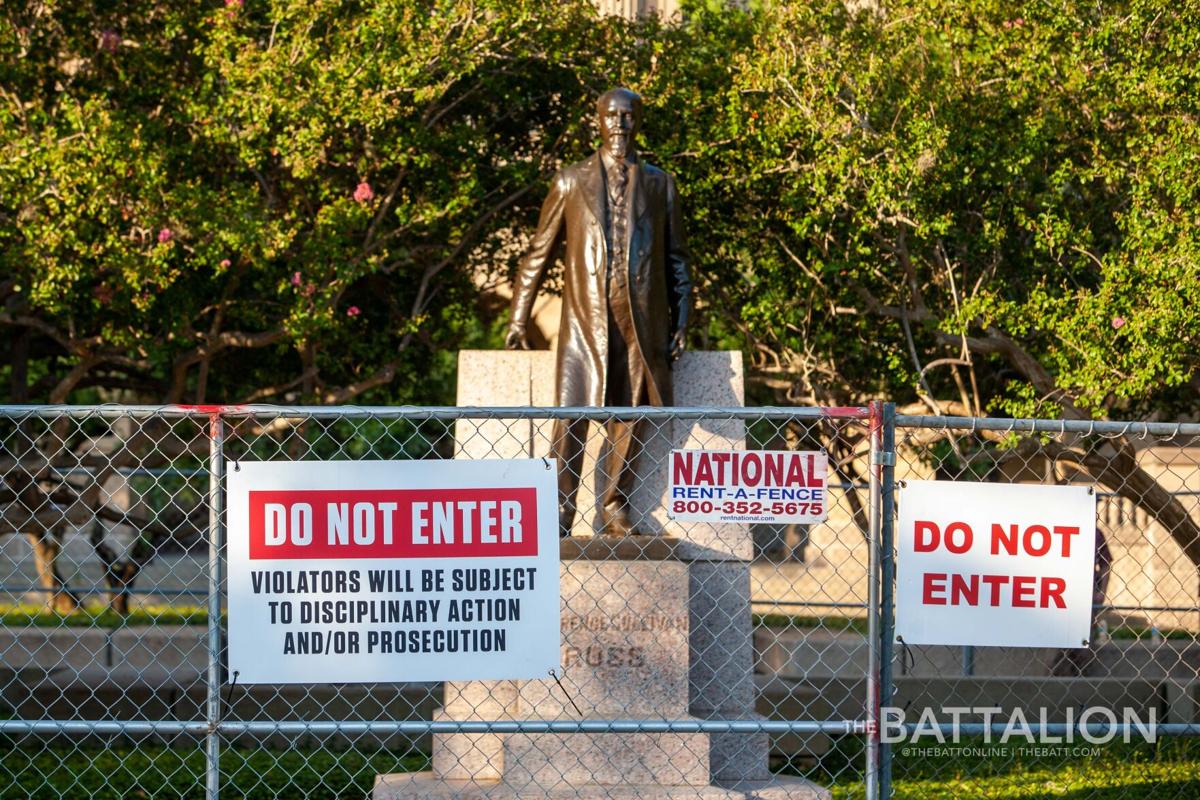 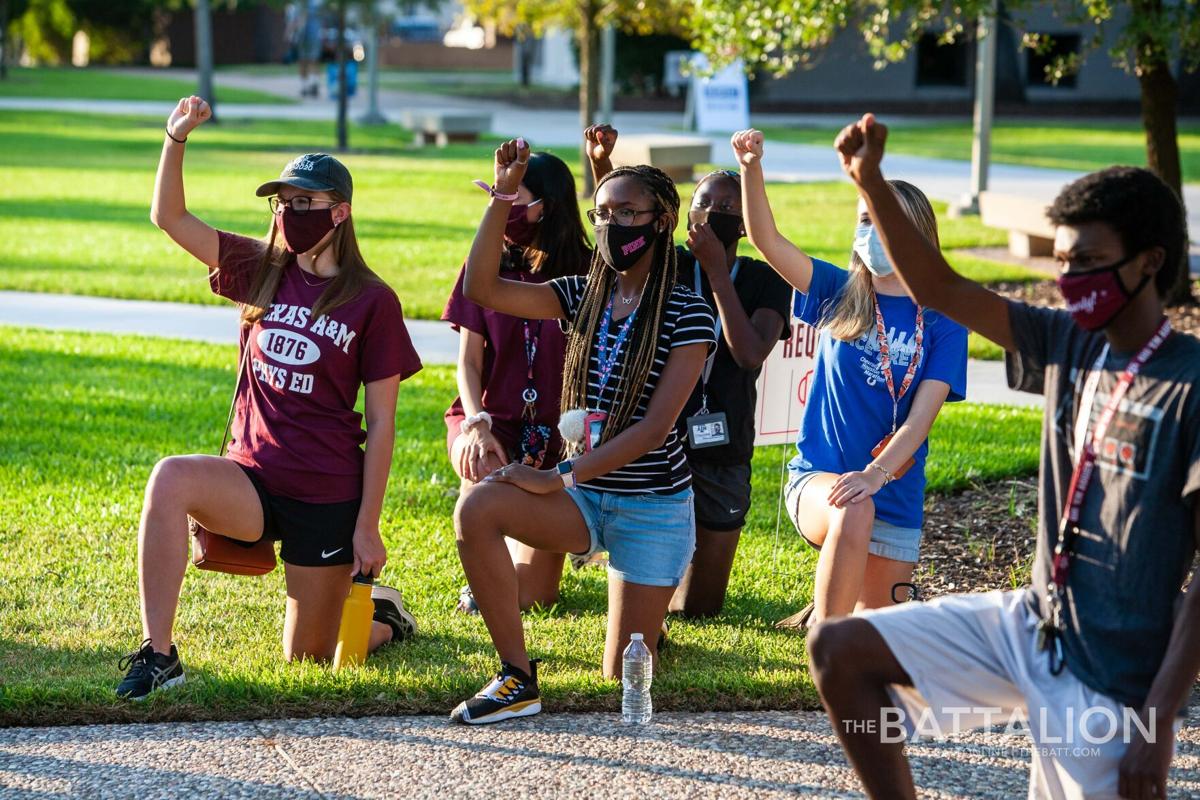 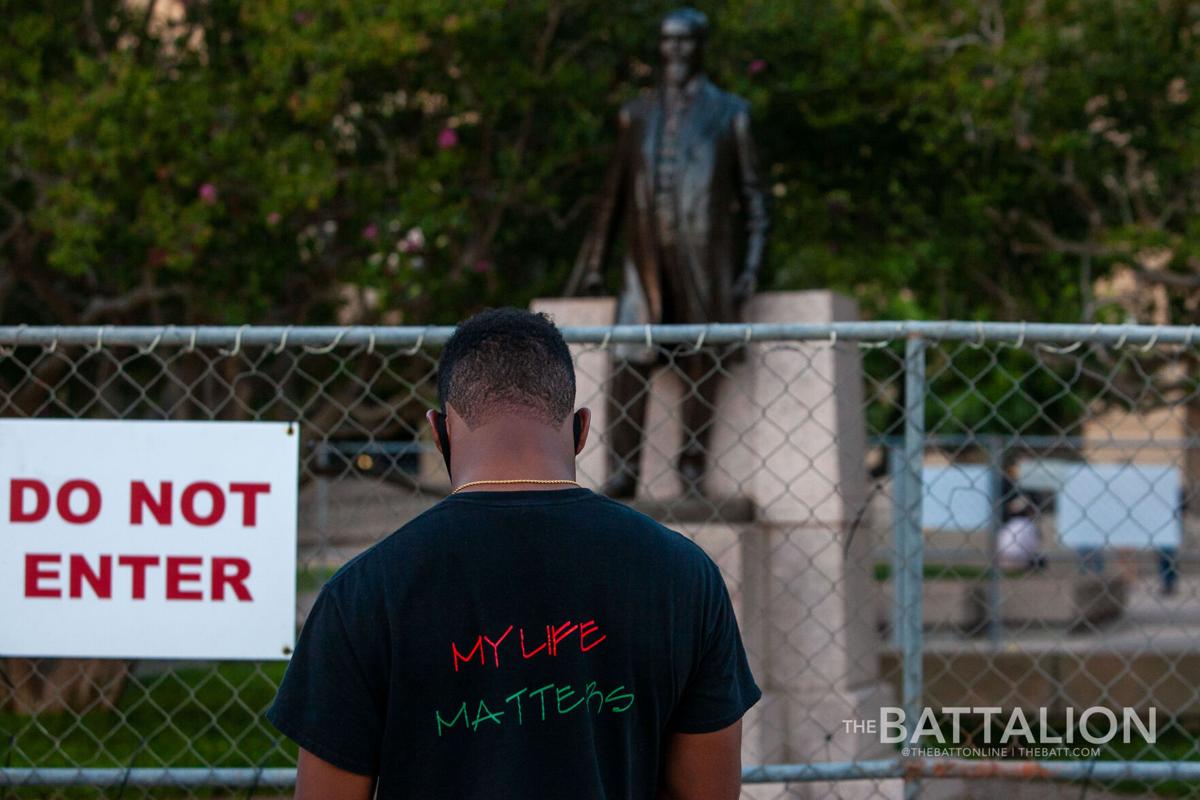 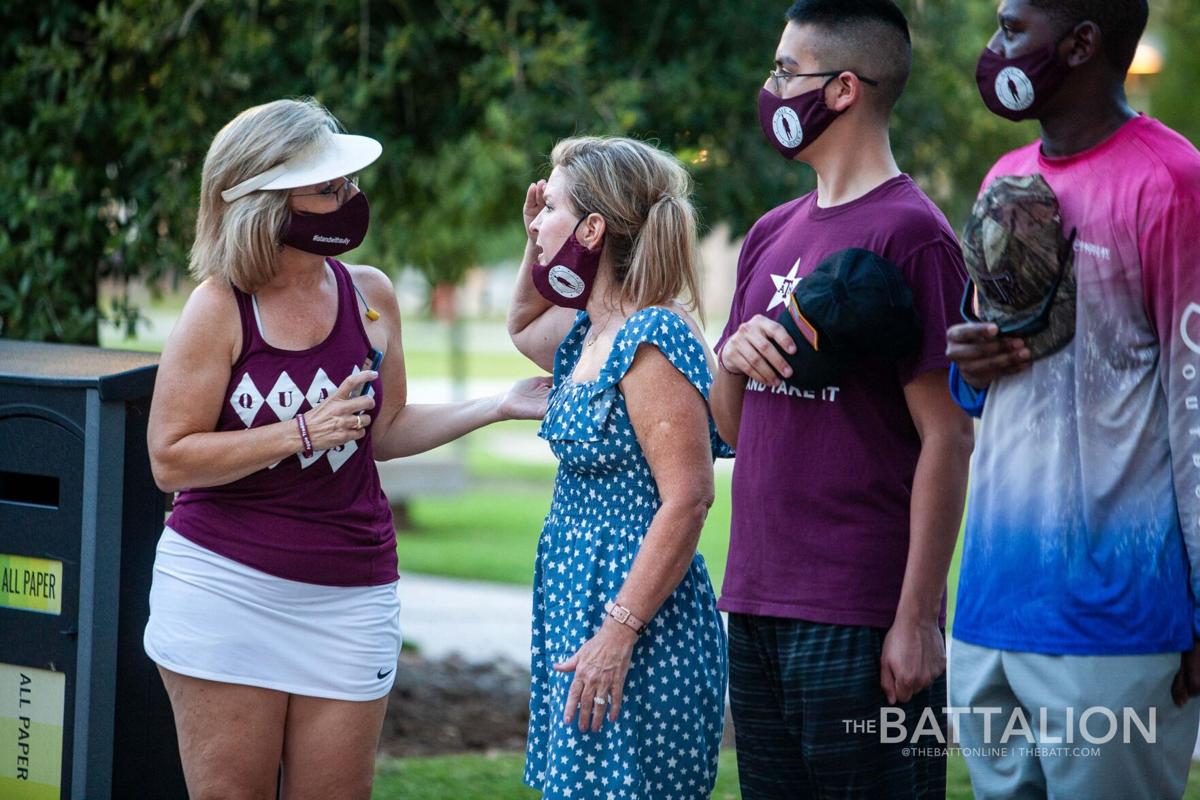 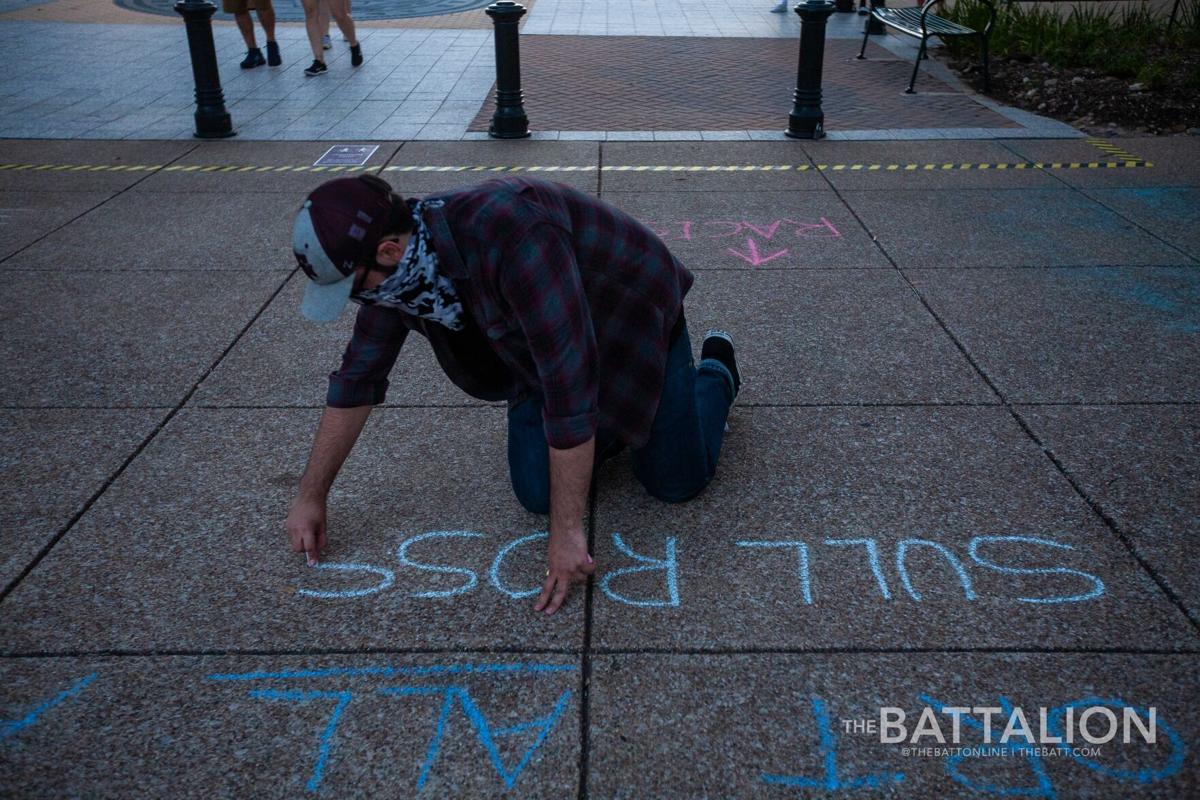 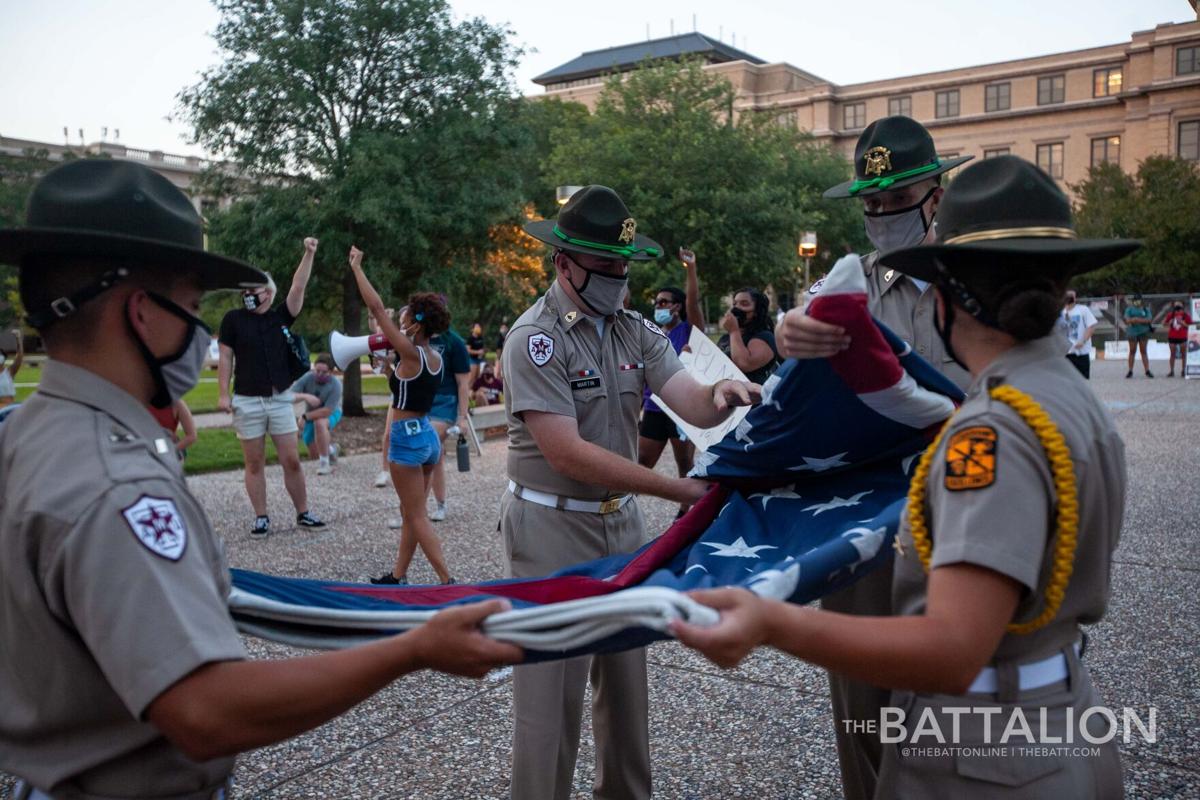 Megaphones and air horns blared as another protest over the Lawrence Sullivan “Sully” Ross statue took place in Academic Plaza with current and former students.

“I’m not sure what the cause is for trying to put a stop to our peaceful protest, except the administration could be hiding their prejudices behind COVID-19 policy,” Caston said

After the initial announcement on Twitter the protest was modified as a religious event with prayer, centered around the presence of the now fenced-in Ross statue, in order for the event to be allowed on campus. This alteration was due to recent university protocol in compliance with an executive order signed by Gov. Greg Abbott.

“Students right now are playing volleyball and basketball in large groups on the Northside of campus and no one is telling them anything,” Caston said. “I haven’t seen any announcements in emails asking people to stop gathering to play sports, but the email alludes to our protests even though they have obviously been in accordance with COVID-19 policies.”

Caston later tweeted that university officials would not allow the crowd to gather as a religious event, but that it would be the personal choice of any individual to show up to the public space to protest.

When asked about what gatherings on campus are permitted, A&M Vice President of Marketing and Communication Kelly Brown said several requests for gathering on campus have been denied.

“I can confirm that Texas A&M recently has had to decline six requests to allow more than 10 people to gather, including a large Catholic group wanting to meet on campus,” Brown said. “It has nothing to do with what these groups want to do on campus, rather it has everything to do with reducing the spread of this virus and keeping our classrooms open.”

Keith Hazlewood, Class of 1974, said he is concerned about the number of professors at A&M who “hate A&M,” and wants to identify them, subjecting them to something similar to Rate My Professor. He would like to include questions such as: "What did they say about A&M?" He also said the claim that white students have more privilege is not true.

“I grew up poor,” Hazlewood said. “I had to borrow money and work. I worked the whole time I was here. Whatever white privilege is, I didn’t get any of it. Kellen Mond got mine. To me that’s a bunch of crap.”

A protester on the anti-Sully side walked to the pavement in the middle of the plaza, and wrote “Sul Ross White Supremacist” in chalk. After this, a woman from the pro-Sully side approached him and began to pour water on the words he was writing.

Sammy Travis, sophomore and pro-Sully organizer, said he completely supports the anti-Sully protesters’ right to free speech, and wishes to engage with them, not argue.

“The goal for today should be about starting a dialogue,” Travis said. “Now, is it really going to help? Who knows? But, we should always strive to start a dialogue because at least we can say we stuck our hand out with some form of gratification.”

Communication junior Kendrea Murphy said, regarding the press for protesters to disperse online, that the other side should be held accountable as well, not just the anti-Sully side.

“There have been other events held on campus that had no regard to social distancing issues,” Murphy said. “It feels like an attack. They are purposely trying to keep this from happening.”

During the protest, the pro-Sully side played The Spirit of Aggieland while the anti-Sully side chanted. When the song finished and the chanting continued, pro-Sully protesters blew air horns to disrupt the chants. At this time, Travis told those holding the air horns to stop and let them speak. He added that he does not want the school to be divided by this issue.

“The divisiveness that we’re facing now, not even as a university [but] as a country, is sickening,” Travis said. “I feel like if that statue gets moved, that rift is going to spread even more.”

Caston said she cannot accept the presence of the statue at A&M.

“An interpretation of history under a white world view cannot be an acceptable form of accommodation for the three percent of Black student representation on this campus,” Caston said.