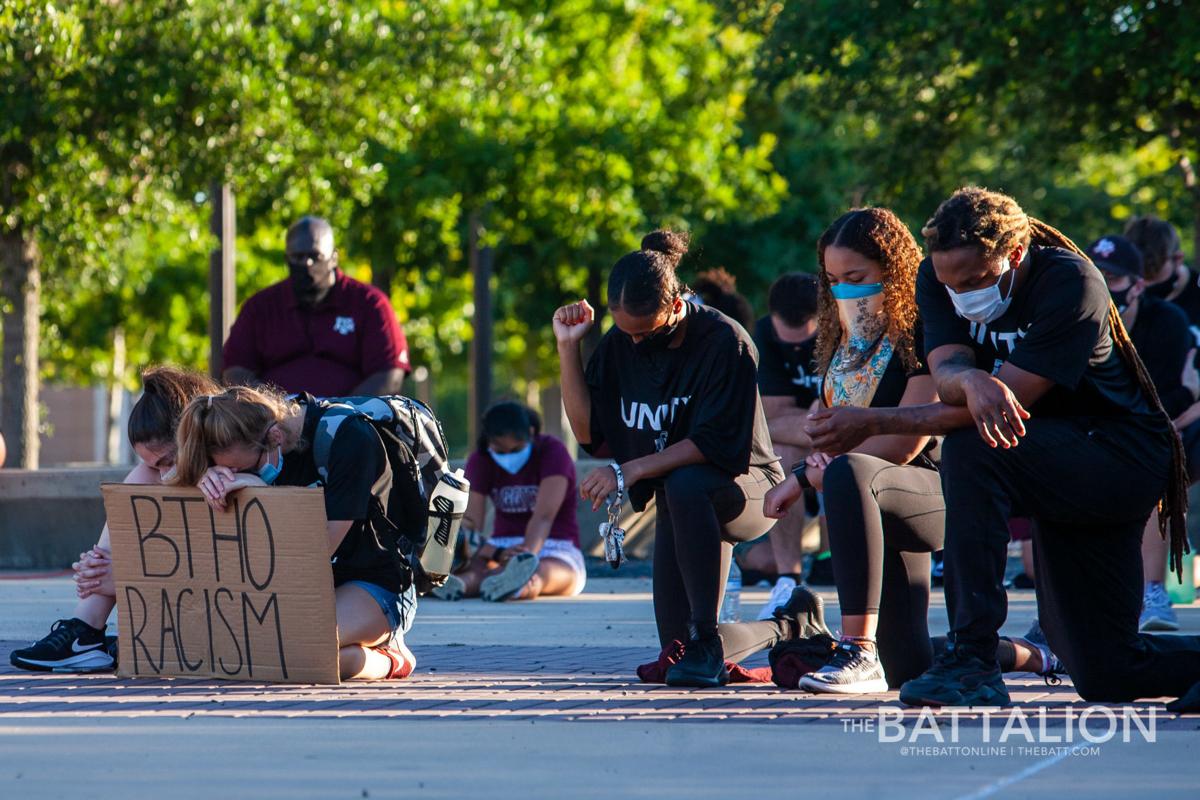 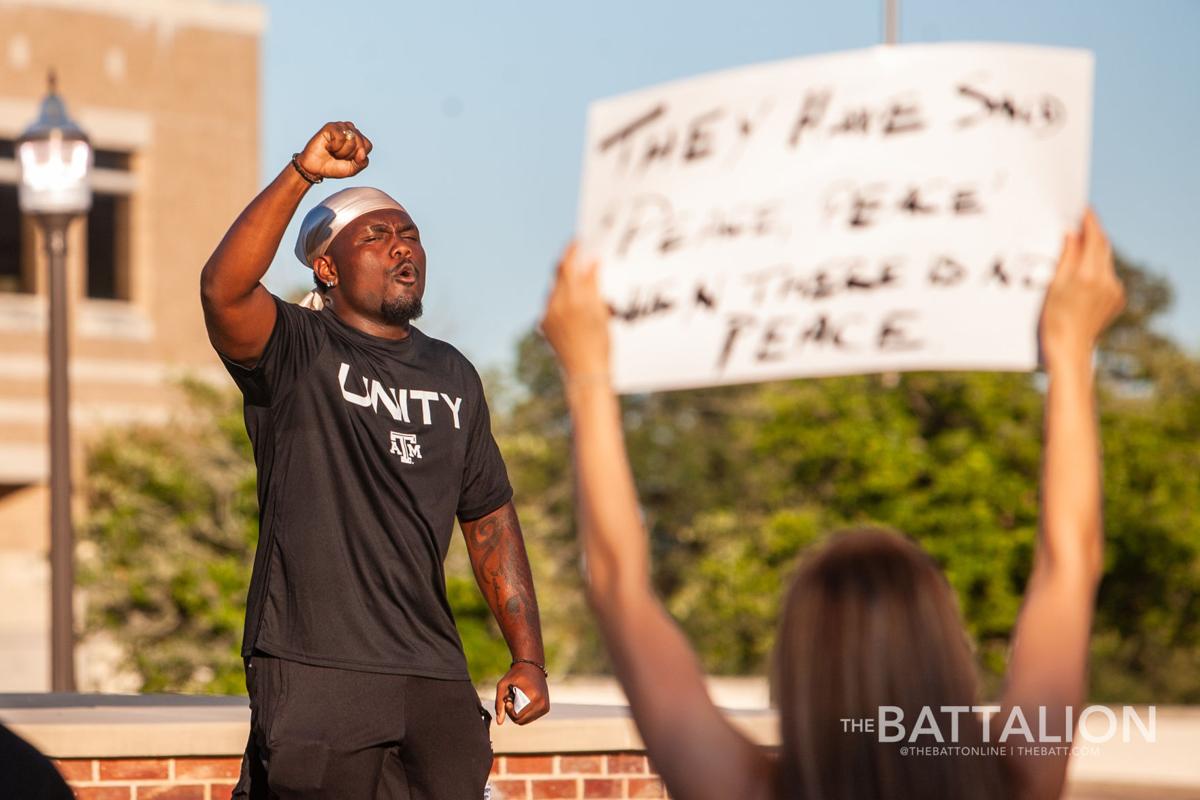 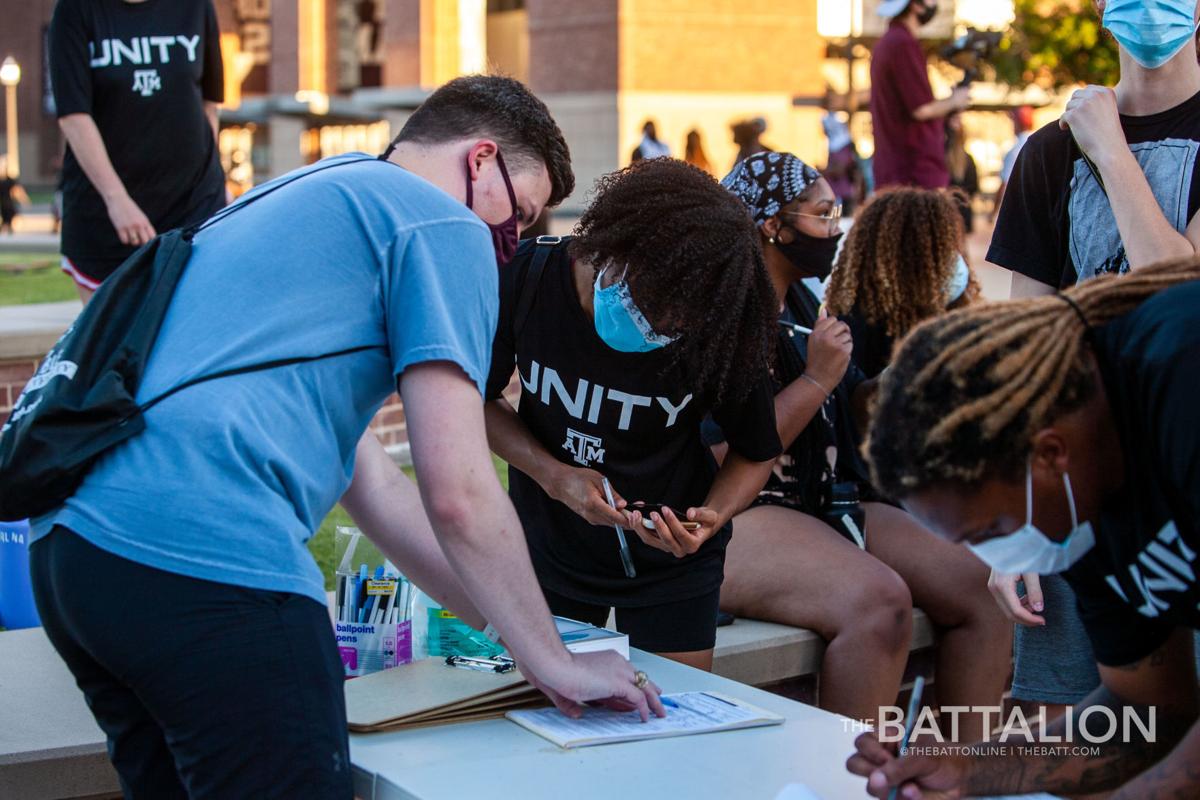 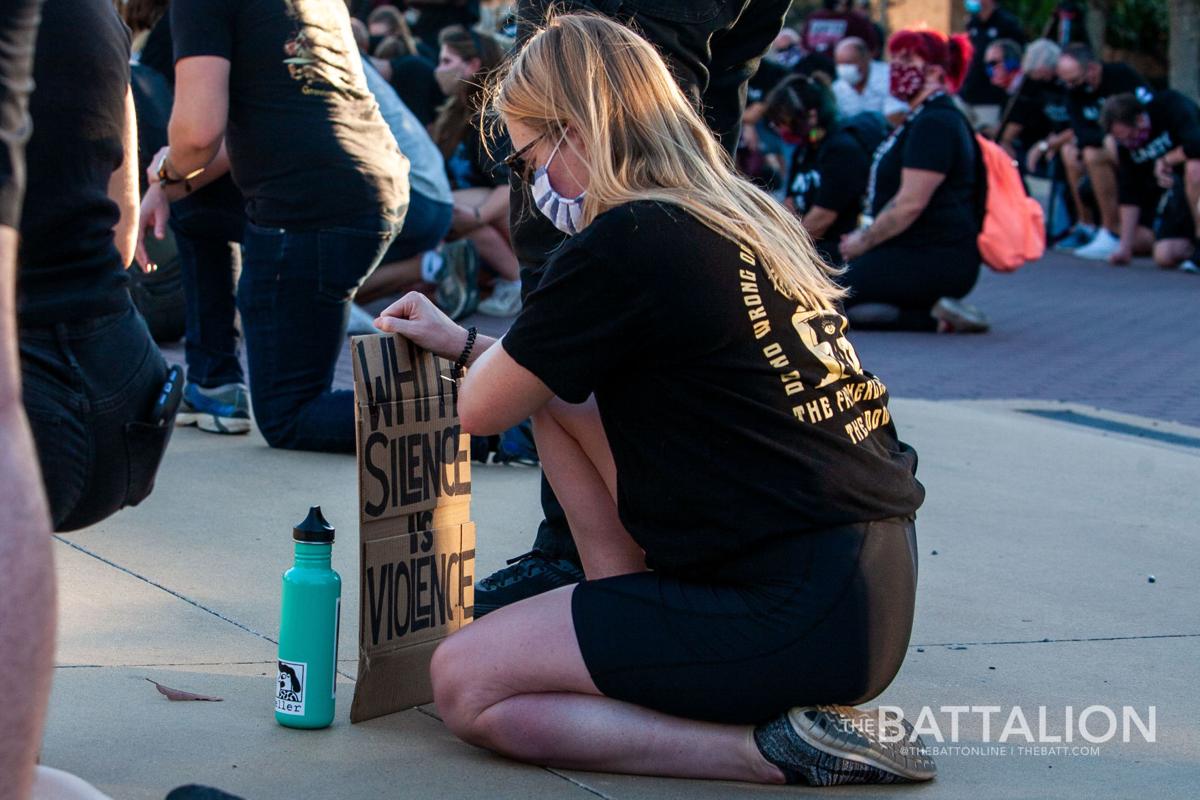 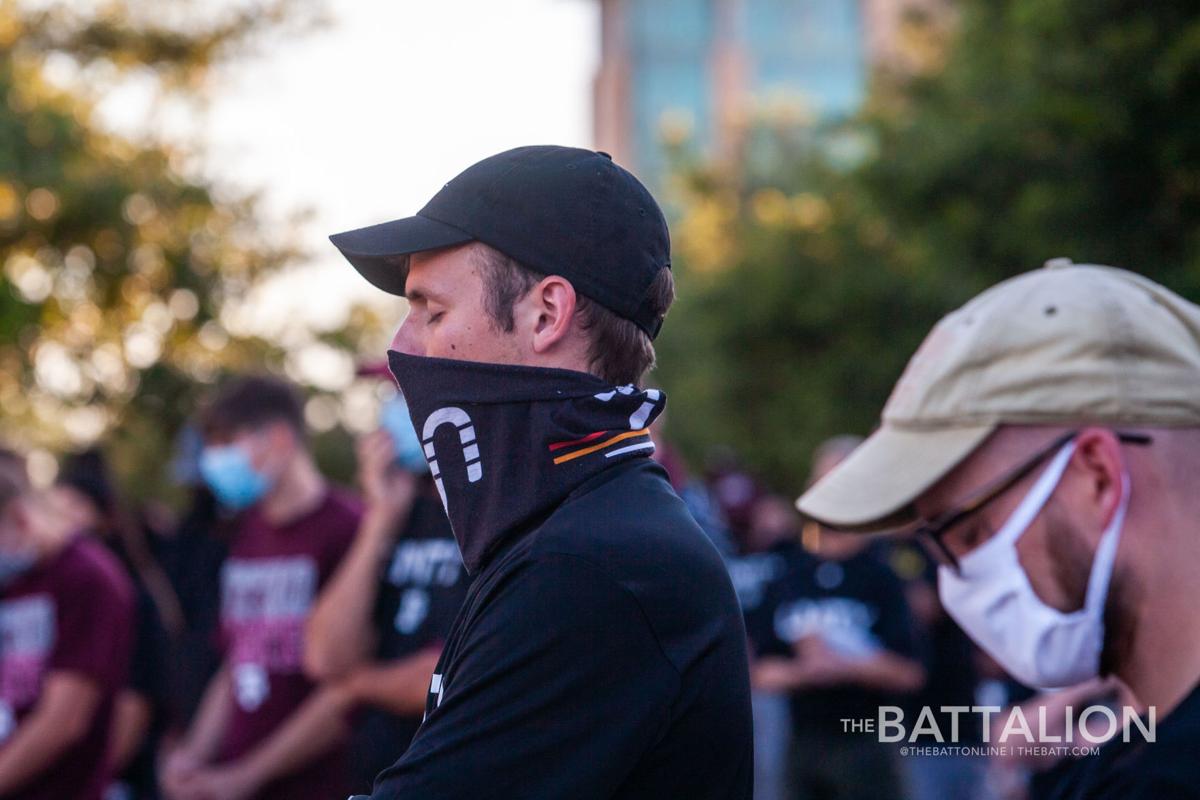 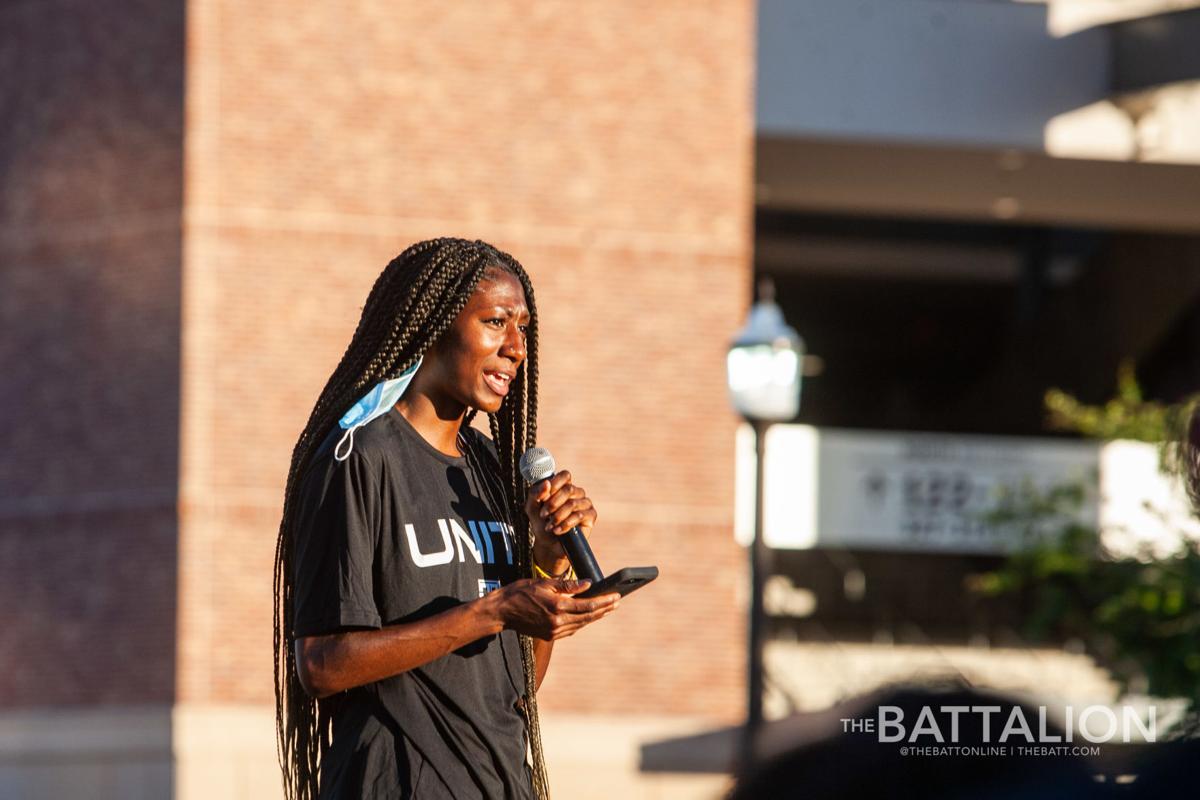 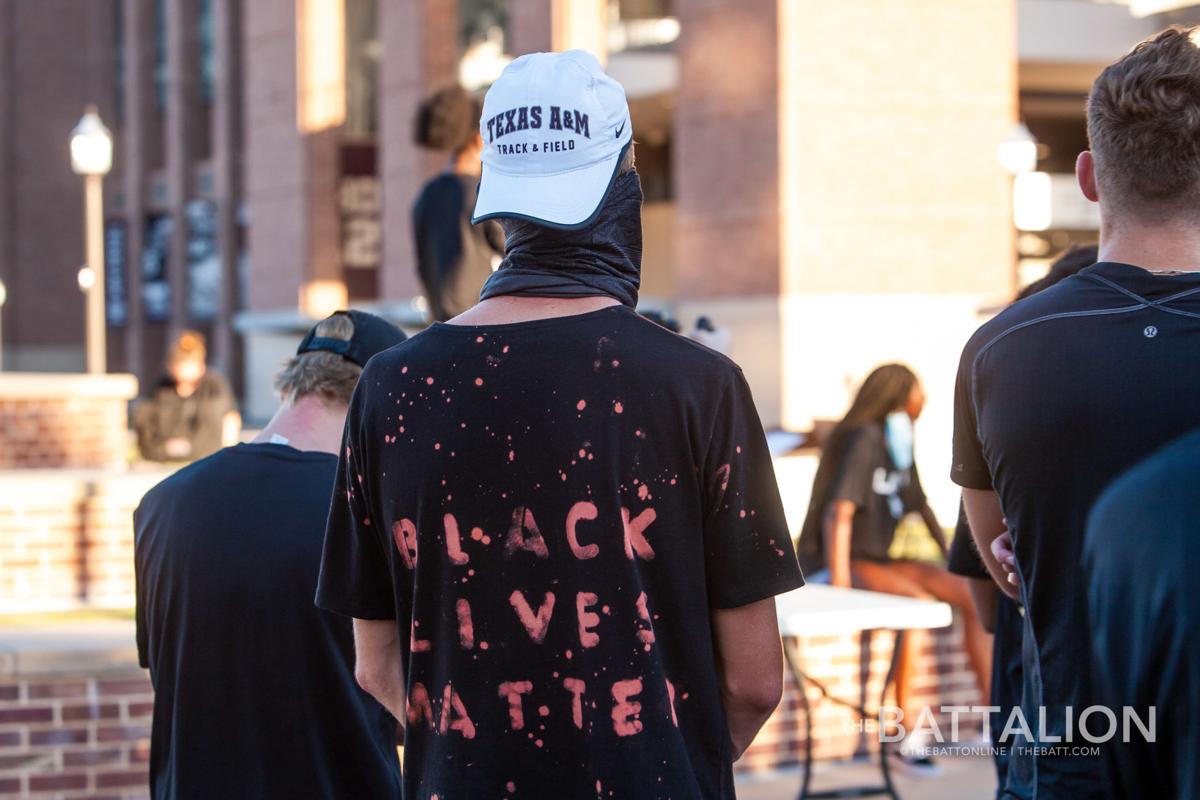 The march started at the 12th Man Statue by Kyle Field and made a circle around the Memorial Student Center and Simpson Drill Field before returning to the statue. Following the march was a moment of silence that lasted eight minutes and 46 seconds — the amount of time George Floyd was held to the ground during his fatal arrest. Student athletes then spoke about some of their experiences and views about what’s happening around the country, and encouraged students to speak up about racism in the community.

Urban planning senior Haley Yelle, a member of the A&M women’s swim team and an organizer of the event, said there was a meeting with all branches of the athletic department including the Student Athlete Advisory Committee (SAAC), to discuss the recent protests happening in Bryan-College Station and what they should do about it.

“We worked with our athletic department staff and fellow athletes on the SAAC board to get this in motion,” Yelle said. “We had our first meeting on Monday and it’s now happening on Thursday, so it’s been a really quick process but we’re really happy about how it has turned out.”

While the SAAC had high hopes for the event, Yelle said the turnout was even greater than they predicted.

“We decided we wanted to continue the conversation with a visual movement,” Yelle said. “We were hoping to get a lot of people from the athletic department here, but it’s gotten a lot bigger than we ever expected.”

Telecommunication junior Karlina Sample, women’s soccer player and organizer, said she wanted everyone in attendance to help Black Aggies by bringing awareness to the problems in both the community and the world.

“With everything going on, I felt the presence of emotions, between feeling infuriated and exhausted that Black people are still fighting for something that seems so simple, and feeling empowered to stand up for myself, my identity and my community, to be a part of the change that we all want and demand,” Sample said.

Human resource development graduate student and A&M women’s basketball player Ciera Johnson said that in order to understand the struggles that Black people are facing people should put themselves in the shoes of someone that is Black.

“Imagine parts of your culture being viewed as ghetto or hood, but the moment the Kardashians endorse it, it becomes hip,” Johnson said. “Imagine everything you feel being taken away from you. Imagine being admired on game days, but feared the moment the game is over. Lastly, imagine a police officer has his knee on the back of your father for over eight minutes, and your father yelling ‘I can’t breathe’ as he suffocates to death.”

Johnson said the death of George Floyd and the animosity behind it is nothing new, rather another example of the racism that is still present today.

“The death of George Floyd didn’t ignite a new movement,” Johnson said. “It just brought light to a fight that has been happening for a very long time.”

Human resource development graduate student and A&M football player Keeath Magee II said the fight for true equality will be a marathon, not a sprint.

“Enough is enough,” Magee said. “It’s time that we start building the society that we want our kids to grow up in, and it started right here. We can only do it together. Keep having those uncomfortable situations, keep calling people out, keep changing the standard and keep holding others to the standard that you want to be held yourself.”

Magee said no matter how their expectations were exceeded at this march, justice is still far away and there is more work to be done.

“Together we took a step toward making our society, our community, the world that we want to live in, better today,” Magee said. “So when we leave from here, don’t let it stop. Let the conversations keep going, don’t let it fade away.”

how can Texas A&M not be diverse? They accept everyone that graduates in the top 10% of their class no matter what the GPA. A person can be in the top 10% with a 2.8 GPA and get in while a 3.6 GPA can not because they went to a more difficult school with more high achievers. This was to help the schools with higher populations of minorities to compete. This is to allow minorities a chance at getting in even if they dont have the high GPA. And now it is being said more must be done? I feel if a student is not academically sound enough to enter then why are we allowing that student to take the place of a student that is. Color does not matter, academics do. Take color out of the applications and then you will see true equalization. You get in on your merit: not your color, not your sex and not your special privilege.