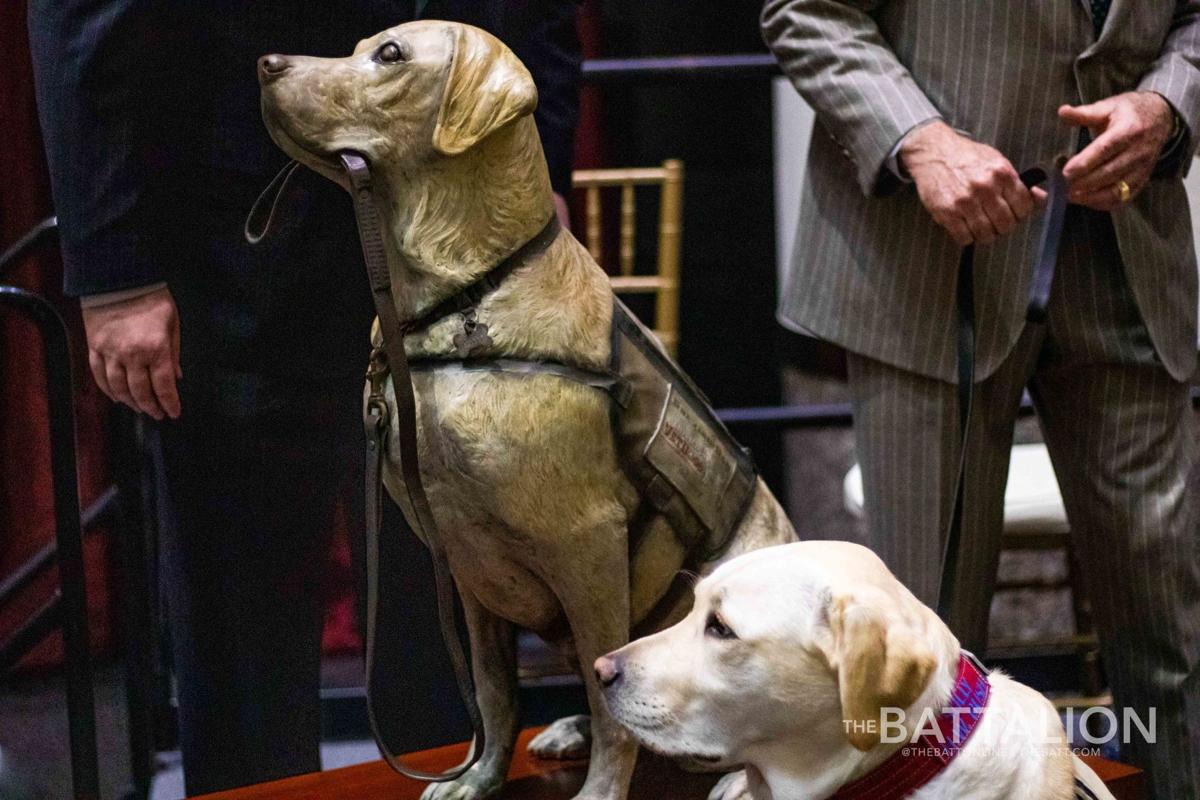 Service dog Sully poses next to a bronze statue of himself unveiled at the George Bush Presidential Library and Museum on Monday. 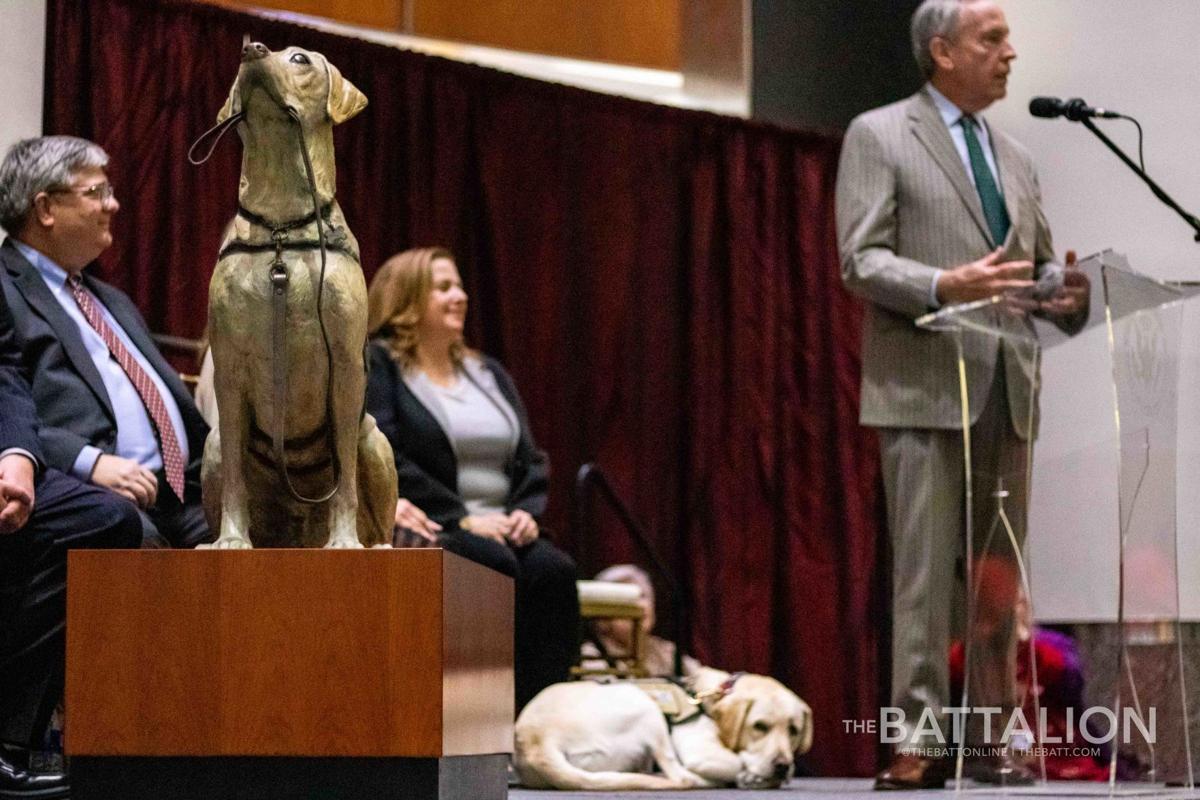 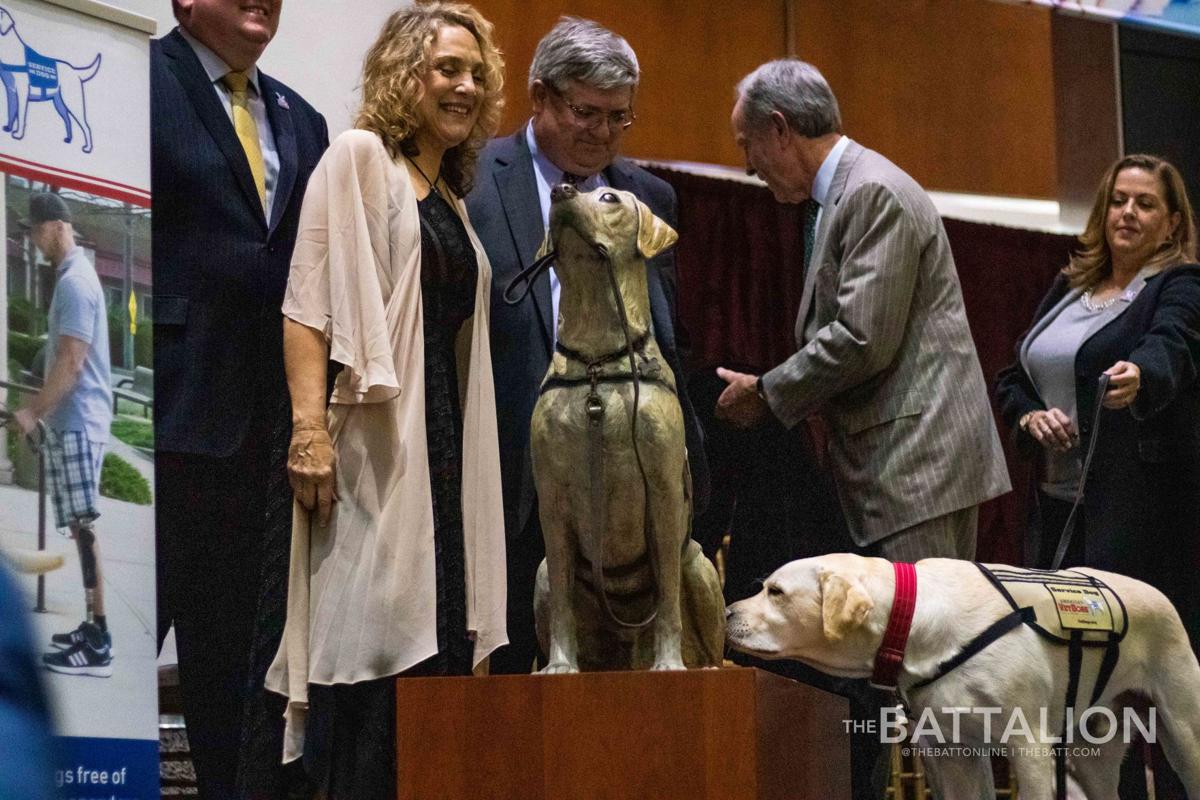 Service dog Sully poses next to a bronze statue of himself unveiled at the George Bush Presidential Library and Museum on Monday.

A bronze statue of George H.W. Bush’s service dog, Sully, is the latest addition to the former president’s library on the Texas A&M campus.

The statue of the yellow Labrador retriever was unveiled at the Bush Presidential Library and Museum in front of donors and supporters on Monday evening.

Named after the famous “Miracle on the Hudson” pilot Chesley “Sully” Sullenberger, Sully was the companion and aid to Bush in the final months of his life. Following the former president’s death, the dog has become part of Bush’s legacy, said Bush Library Director Warren Finch. The statue was created by internationally acclaimed artist Susan Bahary and was commissioned by national service dog school America’s VetDogs. The Sully statue will be permanently placed in the legacy exhibit of the Presidential Library on Friday.

During the unveiling, Finch welcomed the attendees and began by thanking his team, the donors and contributors for creating the opportunity to honor Sully. Bush and his wife lived a life of humanitarianism through the Points of Light organization, Finch said, while Sully brought recognition to American VetDogs and how animals aid former servicemen.

“Even at the end of his life, the service president Bush was so famous for — selfless service — will live on,” Finch said. “Points of Light, which is still done here in the U.S., is now done in Great Britain, and Mrs. Bush, her literacy foundation lives on after her.”

Chief Program Officer for America’s VetDogs Brad Hibbard is an Air Force veteran who was present when Sully was trained to aid Bush. The former president knew that Sully’s presence would create awareness of the group’s efforts to support veterans, Hibbard said.

“We’re just really honored to be here,” Hibbard said. “We’ve seen the pictures of the statue as it was coming together, but it’s going to be really amazing to see it in real life, and we’re just happy that we can be here and take part.”

Bahary was asked to create Sully’s bronze sculpture because of her previous sculptures depicting the animal-human bond. She brought the Purple Poppy movement to the United States, honoring all animals who serve in the military and law enforcement, as well as other service animals. Bahary said she fell in love with Sully during Bush’s state funeral, and she hopes the statue will raise awareness for service animals and their handlers.

“I was happy with it,” Bahary said. “It seemed to have that essence of loyalty that I wanted to capture that I felt was critical.”

Bahary said she’s very moved to have captured the moment where everyone comes together as the best versions of themselves through the love of dogs. Bahary said the moment was almost dreamlike in remembering the former president a year after his funeral, and she’s happy that people were excited about the piece.

“This is the time when people see it and appreciate it that makes it all worthwhile, and that completes the cycle,” Bahary said. “As an artist, you need people to be moved by the work you do.”

Finch said he appreciates the awareness of America’s VetDogs that Sully has inspired through his service to Bush. He said the sculpture is a wonderful likeness of the presidential service dog.

“About putting a statue of sully here, somebody contacted us at one point, [and] we thought it was a wonderful idea,” Finch said. “It kind of went from that to this. Susan Bahary has been working on this thing for a while and it turned out fantastic. I think everyone will just be thrilled.”

According to Hibbard, the statue is a culmination of Bush’s lifelong efforts to support veterans. Hibbard said Bush’s backing for laws like the Americans with Disabilities Act and his promotion of the service dog program through Sully helped service members with disabilities feel appreciated after they return from service.

“I think something that was important to President Bush was letting everybody know that these types of dogs, service dogs, are out there to help disabled veterans,” Hibbard said.