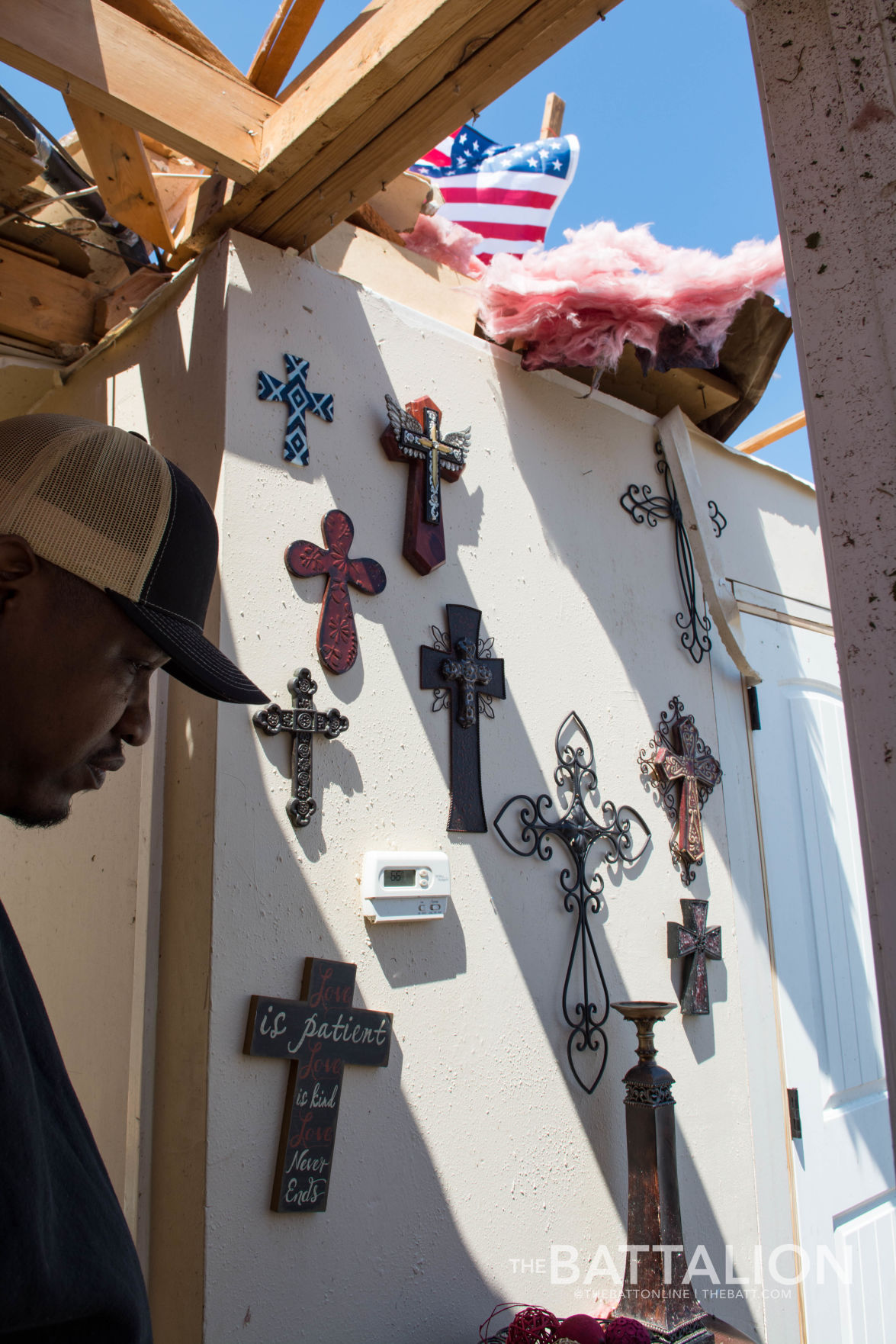 Shedrick Darnell, a 30 year resident of Franklin, stands near his mother’s “Wall of Faith” while surveying the damage of his family’s home following the tornado. 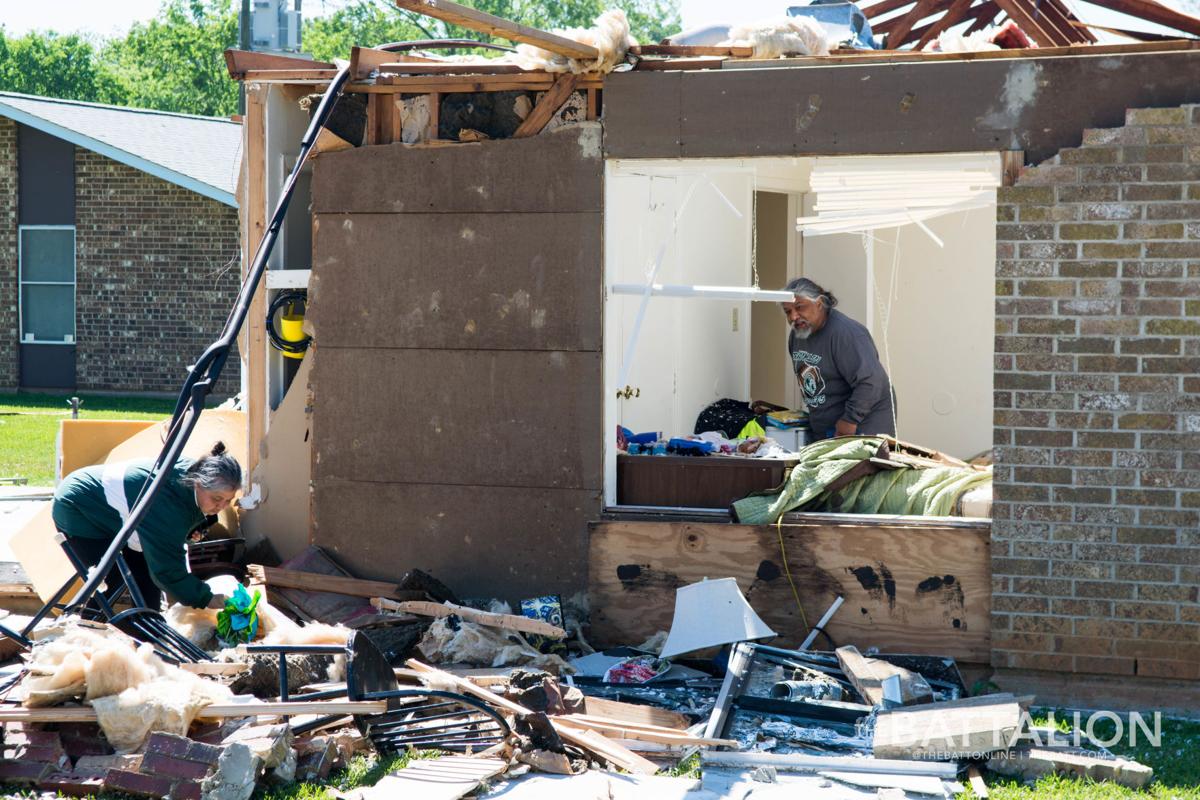 Connie and Victor Henry look for valuables and keepsakes in the rubble of their home. 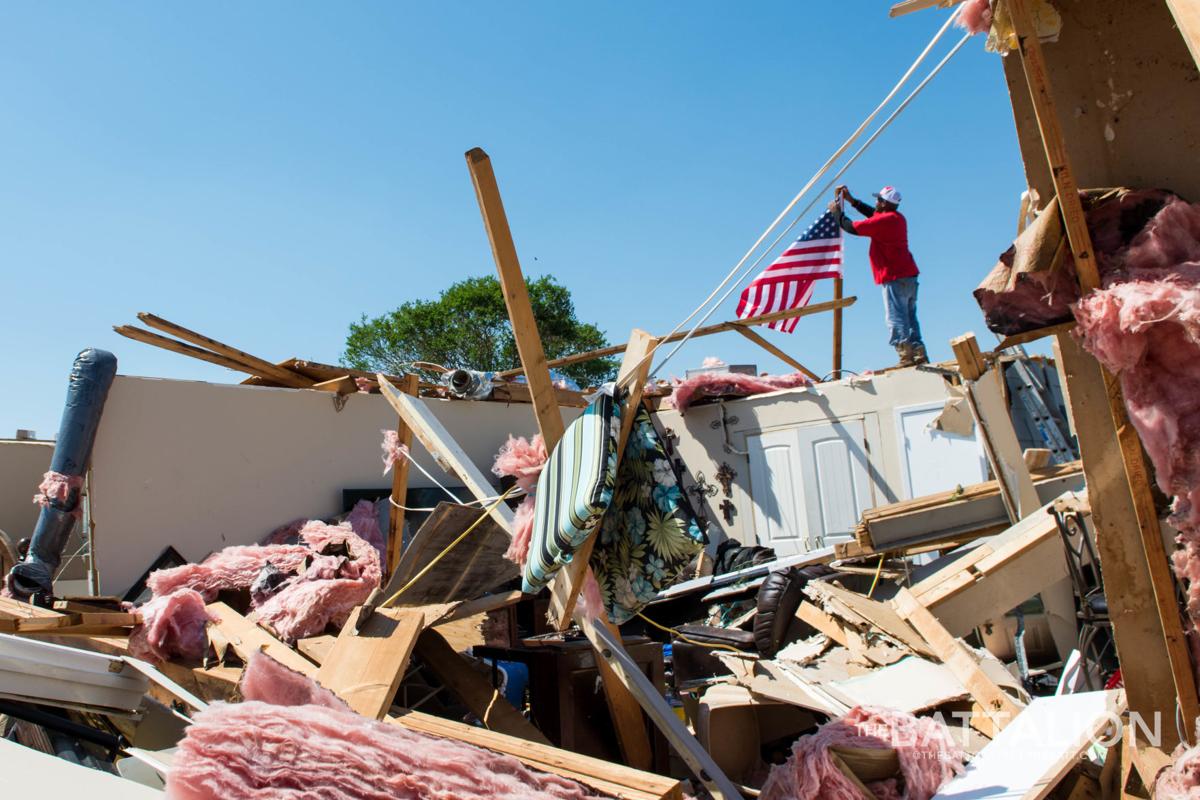 Frederick Darnell hoists an American flag above the wreckage of his home. 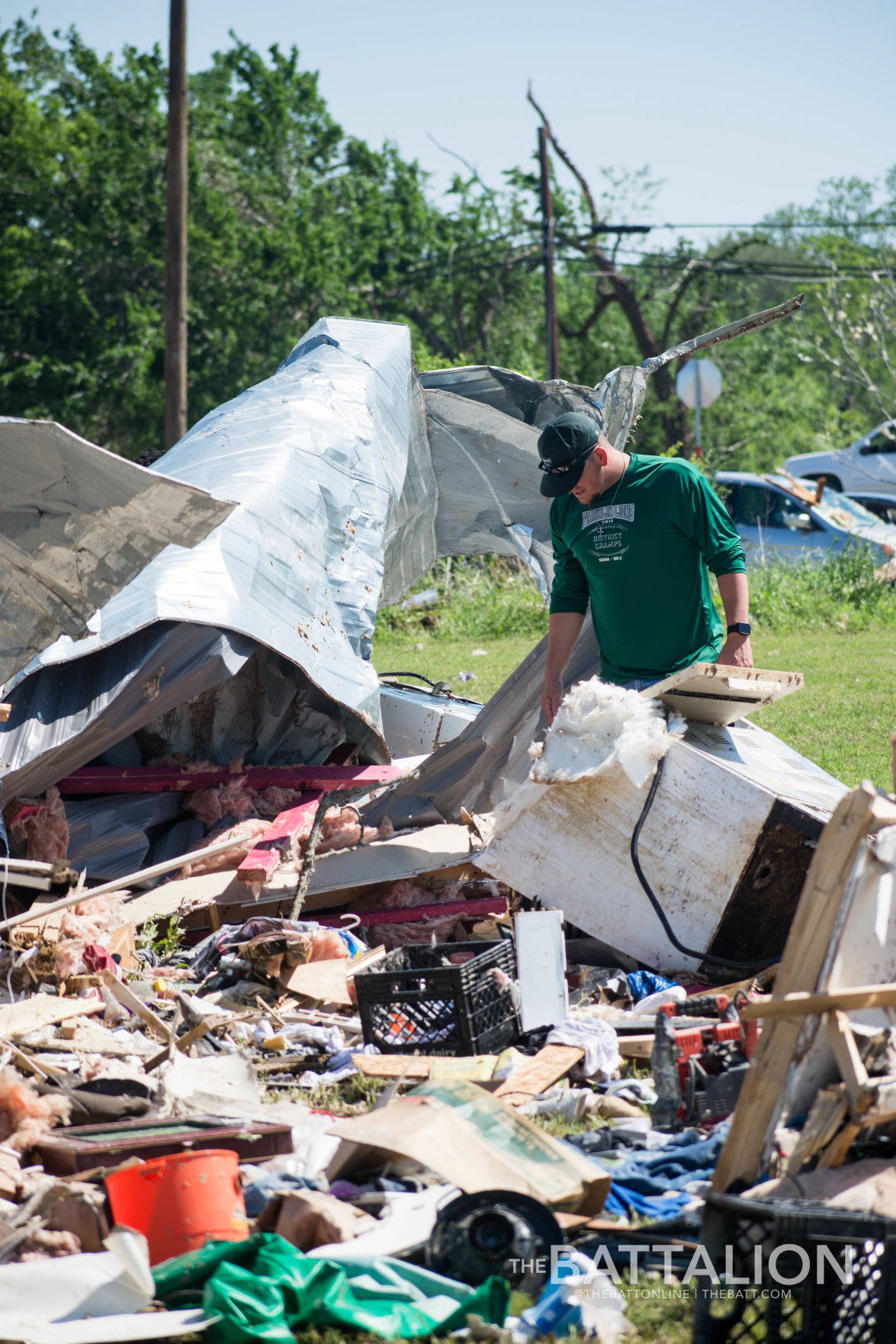 The Franklin community banded together to help those in need gather their belongings after the storm. 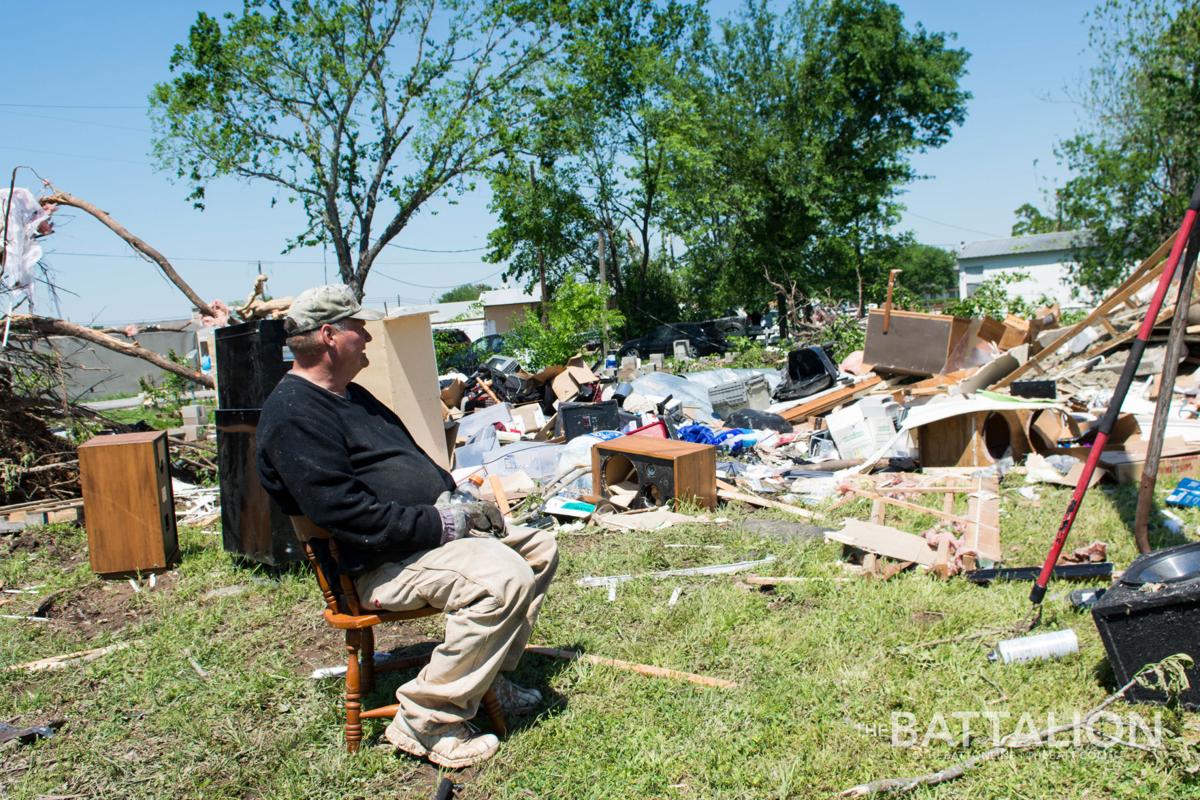 A Franklin resident looks at what is left of his home.

Shedrick Darnell, a 30 year resident of Franklin, stands near his mother’s “Wall of Faith” while surveying the damage of his family’s home following the tornado.

Connie and Victor Henry look for valuables and keepsakes in the rubble of their home.

Frederick Darnell hoists an American flag above the wreckage of his home.

The Franklin community banded together to help those in need gather their belongings after the storm.

A Franklin resident looks at what is left of his home.

Ten crosses still hang on the wall of Shedrick Darnell’s home, which now has no roof or windows. This is just one of over 50 houses that were destroyed, leaving piles of wood and sheetrock scattered across the south side of  Franklin.

Saturday afternoon, a tornado ripped through the entire width of  Robertson county and left the town devastated in its wake. With a population of a little over 1,500, the county seat located 40 minutes outside of College Station found itself in the direct path of an EF3 tornado. One church and 55 residential homes were destroyed, and 4,000 across the county were left without electricity.

Connie and Victor Henry moved to Franklin after their house in Hearne was destroyed by a water leak. Connie, who was in her home as the tornado tore through the brick building, said everything happened quickly, yet felt like it lasted forever.

“In an hour and 45 minutes, my life changed from what we call normal to disaster,” Connie Henry said.

Born and raised in Franklin, William Kirven was at home with his puppy when his power cut out and the wind started to howl. Kirven said he quickly went to the bathroom to seek safety.

“And as I’m holding the door shut, I see light behind me,” Kirven said. “The whole back side of the house flipped off to the front, so I came out of the bathroom and there was a piece of sheetrock just laying over, like a piece of the wall had fallen, but it was high enough so I could get under and ball up until it passed over me and I got up and ran to my sister’s house.”

Though many of Kirven’s friends and family have also been affected by the storm, he said he is thankful that no one was seriously injured. Kirven plans to rebuild the home he and his mother share.

“Even different communities, they’ve all come together,” Kirven said. “Everybody is alive, that’s the main thing.”

Victims of the storm can find shelter at the First Baptist Church, which has volunteered its facilities to the Red Cross. Interim pastor Ted Elmore said the shelter has an abundance of water, food and supplies as of Sunday. He said the rural community is largely faith-based, which has helped its members to pull together.

“Even folks who are not part of the faith community have compassion for their neighbor,” Elmore said. “And so it was not even sitting back wondering, ‘What do we do?’ We just show up.”

Emergency management coordinator for Robertson County Billy Huggins said Red Cross will be conducting a disaster survey to calculate the total cost of the storm’s damage. He said the survey will account for each area hit by the weekend’s storms, including the each of Alto two hours northeast of Franklin.

“Alto is just destroyed,” Huggins said. “We have to follow the FEMA guides on how we track everything so that we get reimbursement assistance from FEMA.”

Billy Huggins’ nephew Chris Huggins is leading Operation BBQ Relief’s deployment to Franklin. The non-profit disaster relief organization responds to catastrophes all over the country. Chris Huggins said the organization planned to give out over 1,350 meals throughout Saturday and Sunday.

“Our motto is to give that one hot meal out that counts,”  Chris Huggins said. “BBQ is a comfort food, you know. BBQ brings back memories, good times, good memories. It’s a moment for someone to sit down and have a hot meal, and it brings back hope.”

Robert Gonzales, a public information officer with the Red Cross, said about 15 people are currently taking refuge in the First Baptist Church’s temporary shelter, and the Red Cross’ role is to provide assistance and supplies for families in the shelter.

“The other thing that we’re doing is providing what we call disaster equipment supplies, so things like clean-up kits,” Gonzales said. “Mops, brooms, buckets, gloves, shovels, rakes — things that they can utilize to help clean up their home and everything.”

Charles Pope works at the county courthouse and said there are no words to express the impact of “a big loss for this small community.”

“It’s going to take a while for them to get back on their feet,” Pope said. “But with the good Lord’s help, with everybody coming together — they can rebuild.”

Students and community members who would like to volunteer can call the emergency operations center at (979) 828-6680.