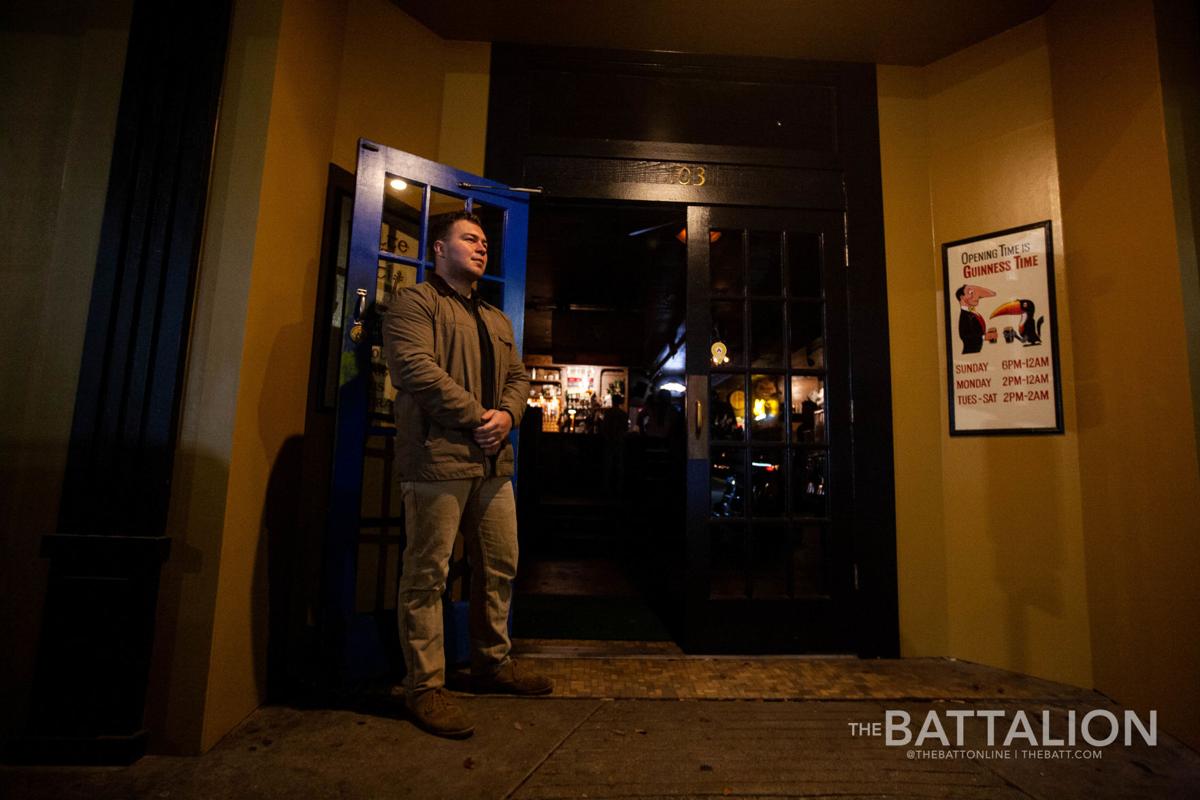 Oceanography junior Matt Hafer is one of the bouncers at O’Bannon’s Taphouse. 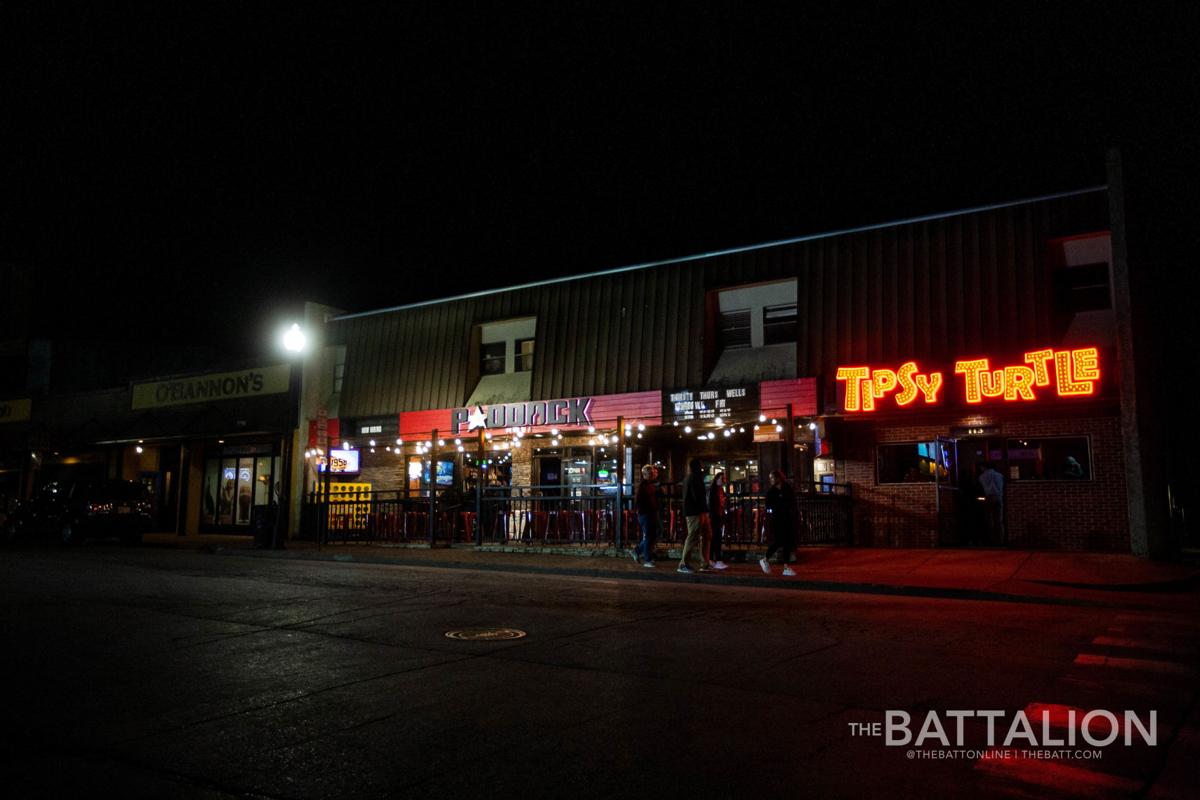 The Northgate District is home to a variety of bars including O’Bannon’s Taphouse, Paddock Lane and Tipsy Turtle.

Oceanography junior Matt Hafer is one of the bouncers at O’Bannon’s Taphouse.

The Northgate District is home to a variety of bars including O’Bannon’s Taphouse, Paddock Lane and Tipsy Turtle.

There’s a commonality to the craft of bouncing on Northgate: stand tall, say little and keep a balled-set of knuckles tucked away for safekeeping.

For Blake Strieder, that routine was shot to hell the day he needed to creep behind a 6-foot, 250-pound veteran who overstayed his welcome in Dry Bean Saloon.

“He was pretty lit up to put it lightly,” Strieder said. “I knew it, [the] bartender knew it, and he was like, ‘Okay, I’ll give him a drink, but after that one drink we have to cut him off after that, that’s it.’”

As the first and last face seen when entering the bar, a bouncer sets the tone for any establishment. They are firm advocates of the golden rule: every doorman can easily be a best friend, provided they have no reason to use someone’s head to open a door. The threat of confrontation comes with the title, and Strieder said his run-in last fall was as tense as things can get for a doorman.

“The guy proceeds to say, ‘No, I paid for two drinks,’” Strieder said. “We had this whole argument where the bartender was like, ‘No, you only paid for one, and I can’t allow you to have that second drink.’ The guy wouldn’t let it go.”

Working his way down the narrow bar to the spot of an impending eruption, Strieder said his weeknights spent carding “townies” and graduate students had usually been very easygoing. That Tuesday was not one of those nights.

“Dude,” Strieder said. “Yeah, he was 60. Yeah, he was really drunk. But it would’ve been a hell of a fight to take him down. It got to the point where my bartender was like, ‘We can either give you a refund or figure something else out,’ and there was this moment where there was a standoff between us.

“So he looks at the other door guy, looks at my bartender and was just like ‘f--- it,’ and grabs his stuff and walks straight out. Never had a physical altercation, but that was by far the closest I’ve ever been.”

At O’Bannon’s Taphouse, George Dickey does a little bit of everything. If he is not handing out pints of stout, then he’s surveying the floor, keeping a lookout for any patrons performing what he calls the “Mortal Kombat Dance” — swaying back and forth before spilling a stream of homemade Guinness onto the hardwood floor.

With his share of time spent at the door, Dickey said he had seen the good, the bad and the downright unbelievable.

“The weirdest [interaction] was when I got called an a------ because I took a guy’s fake ID,” Dickey said. “I said, ‘Yeah, I’m sorry you can’t come in. TABC [Texas Alcoholic Beverage Commission] rules’ and what-not.”

Misery loves company, but in the case of Dickey’s underage schemer, it just wanted him.

“I guess he was with his sister or some friends of his who were all of age, but they said, ‘tough luck,’” Dickey said. “They came inside and partied for a couple of hours, and he was just wandering the streets drunk and underage by himself.”

There is an insult to injury, and then there is what happened to this kid outside of O’Bannons.

“Then by the end of the night, this girl who was supposed to be his DD [designated driver] decided she was going to hook up with some dude and said, ‘You’re a grown man, you can find your own way home,’” Dickey said. “Then he had the nerve to call me an a------ when she left because somehow I’m the bad guy.”

However, Dickey said time spent among his friends on staff and conversations with members of the Aggie community is what he looks forward to most before walking into the taphouse. Still, he said there are some things not even a bouncer can cool.

“One of our floor guys walked into the bathroom, and the urinal cakes were on the ground, and we couldn’t figure out why,” Dickey said. “One of the patrons told us, ‘Oh yeah, there were two guys in the bathroom throwing the urinal cakes at each other.’ Yeah, that’s a weird one.”

Triston Barefield, a bouncer at Logie’s On Campus, said he enjoys seeing the familiar faces of devoted customers, even when those faces do not belong to the person holding the ID.

“There’s a lot of fakes that come by the door, and most of the time it’s actually people that aren’t them,” Barefield said. “It’s just somebody else’s ID, but the ID that they have is somebody that’s usually a regular or graduated last semester. They get caught all the time, and you waste all that money for a card that, in five seconds, I can tell is fake.”

No matter how many insults he has had flung his way and how many fights he’s broken up, Barefield said what bothers him most are not the drunkards, but the misconception.

“[People] think that just because we’re at the door and we have to sit outside all night that we’re trying to make you have a bad night as well, but we’re really not,” Barefield said. “We want you to have a good time. We just want you to have a good time if you’re of age. You can’t be mad at the workers for that, basically shooting the messenger.”